Bookmobiles, book-exchange projects and even living "books" are serving Egyptians without access to libraries. 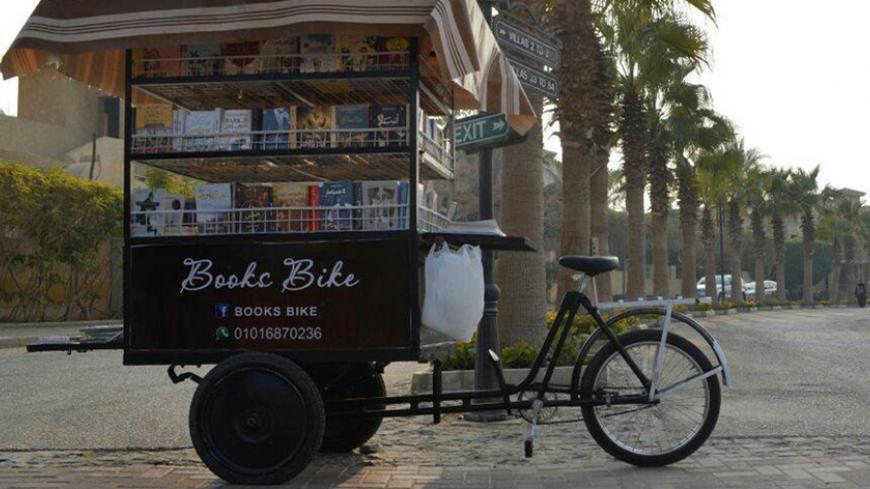 The Books Bike is seen on an Egyptian street. - Books Bike

Nothing in the buzzing room was typical of a library. There were no shelves labeled with romance, history or politics; no books in sight; no “quiet please” sign. A young girl whose face and body are noticeably underdeveloped sat in one corner describing how she is treated either as a monster or as a pitiful person people touch for blessings.

Israa Ahmed, diagnosed with several congenital anomalies, is one of the “books” at Human Library Egypt. For a day, “readers” could have a dialogue with living stories. Originally part of an anti-violence program in Denmark in 2000, the Human Library idea spread to 70 other countries and was brought to Egypt by computer engineer Asmaa Ismail. She hopes it will help diminish stigma and judgment from Egyptian society.

“We need it badly. Our society is full of stereotypes everywhere,” Ismail told Al-Monitor. She said she wants not only to inspire change in the audiences, but also to “set stereotyped people free and make them feel empowered.”

The human "books" speak of different kinds of challenges, so "readers" are sure to connect with at least one of them, stressed Amira Rizk, one of the program’s organizers. Despite bearing the scars of prejudice, participants are unafraid to narrate their compelling stories.

Instead of reading about the struggles of a refugee, visitors to Human Library Egypt come face to face with a refugee who talks about her long walk from the war in Syria. Other available "titles" include a woman who challenged a societal taboo and adopted a baby girl without being married and Eman Mourad, who became the first woman in the Middle East to perform karate from a wheelchair.

“My mother raised me in such a manner that my disability never hindered my life. I cooked, cleaned and did everything in the household,” said Mourad. It is society that sees her “through one eye.”

People fear what they do not know, said Rizk, explaining, “We all tend to stay far away from strange things and prefer to frame them in our own perceptions and within our own boundaries to save ourselves the hassle and effort of going deeper.”

Ismail believes that with Egypt's failing educational system, knowledge is not necessarily acquired formally and learning from people and life is as essential. “One may be illiterate, yet human aware and very understanding,” she said.

A set of rules was distributed among those present at the Human Library's March 3 event, the third of a series. The human “books” have certain rights, such as being treated with respect and ending a conversation if they wish. The readers also have rights, among which is “reading” as many “books” as they wish in one day so long as they do not “mark or damage a book physically or mentally.”

The idea not only benefited readers; the “books” themselves left feeling fulfilled. “I needed this to feel that my existence is useful,” Ismail said one participant told her.

After a long path of self-doubt and alienation, Ahmed came to realize that parents ought to teach their children acceptance of appearances and ideas, no matter how different from their own. She told one of her "readers," “Those making fun of me, those running away from me and those asking their kids to stay away, they are the ones with defects, not me.”

Another project roams the streets of the Tagamou Khames district on a daily basis, selling books from a cart. Hadeer Mansour, 27, and Mohamed Badr, 26, both quit their jobs and together decided to do create the Books Bike. The hand-crafted tricycle-shaped cart took off mid-December. They hope to encourage people to read.

“People are used to carts of sweet potatoes, kebda or other food. Ours is the first of its kind,” said Badr.

The sight of the books out on the street and in the open air is alluring. The lower shelves have easily reachable children’s books, and the higher shelves contain literature, art and history. The Books Bike’s Facebook page constantly posts recommendations and book reviews to aid in the book-picking process.

“Based on a person’s interest, we spark conversation and lead it to reading. We recommend books for them, even if we don’t have the book,” Badr said.

The legally registered Books Bike costs considerably less than buying or renting a bookstore. The portable library plans to reach out to other areas, including the districts of Zamalek, Heliopolis and Maadi.

Another unconventional library is called the “Curfew Library.” Born out of rough political circumstances, it was created in August 2013 by BridgEgypt, a corporate social responsibility and communications consulting company. Back then, the military maintained a curfew as it violently dispersed protesters that supported ousted President Mohammed Morsi.

“We would come up with ideas for people to help the community while they were forced to stay at home,” said Karine Kamel, co-founder of BridgEgypt. One of the ideas was putting “books that are sitting there rotting on shelves” to good use. The readers began to swap them, and then took it a step further by collecting books people didn't need to give to people without access. The Curfew Library organized book raising events where people could discuss, swap and donate books. One event alone left the library with 1,000 books.

The name Curfew Library is a reminder of the cause, explained Kamel. “The idea of a curfew is oppressing, and a library comes in sharp contrast with that. Books allow you to travel in your mind; they are freeing,” she said.

Diwan bookstore got in touch and donated over 100 books. Plan International also contacted BridgEgypt when they heard that the library was looking for less-fortunate communities to create curfew libraries within them and got its neighborhoods involved.

Two Curfew Libraries were set up in the slums of Ezbet Khairallah and Tammou after research was conducted to determine the kinds of books those readers were looking for.

At Ezbet Khairallah, the residents themselves came up with the idea that borrowing a book would cost 1 Egyptian pound. That money would pay for the development of the youth center. The center also organized storytelling and literacy classes for mothers who couldn't read to encourage them to impart the love of reading in their children.

“Even those who do have access to books in lower socioeconomic districts are only exposed to certain types of books — those related to formal education, which are censored and limited,” according to Kamel. Not all of the donated books are in Arabic. Books in English were also made available in the slum areas. English books are usually more expensive to buy, but they offer different topics that one may not find among Arabic books.

A third curfew library was set up in higher-end Garden City district where a cafe called Falak welcomed the public collection as a memorial to an avid reader, whose partner wanted to keep his legacy alive.

BridgEgypt is still in possession of some books, mostly children’s, waiting to find a new home.

“The idea is to democratize culture. Everybody should have access to knowledge,” stressed Kamel.