A train serving as an library visits children in the Gaza Strip to encourage reading and learning. 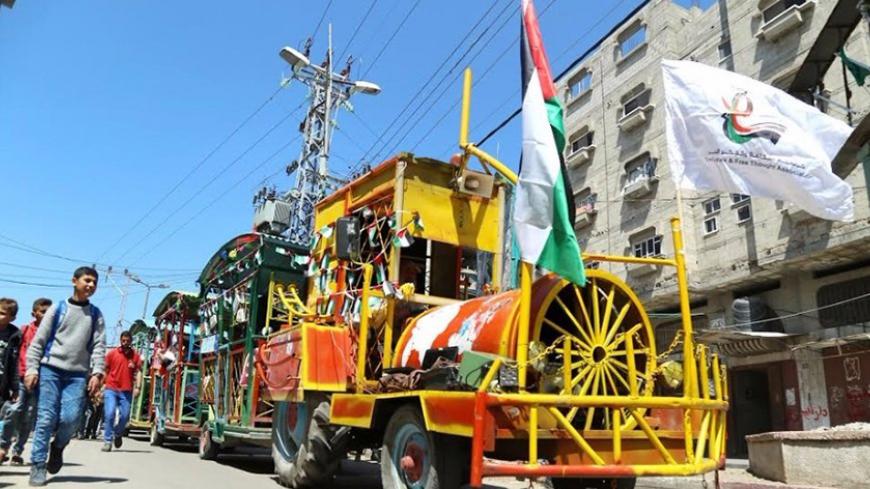 Children ride on and run alongside the "knowledge train" in Khan Younis, Gaza, posted on April 17, 2017. - Facebook/The Culture and Free Thought Assocation

KHAN YUNIS, Gaza Strip — Inside the cars of the train that have been decorated with Palestinian flags, colored balloons, flowers and cartoons, dozens of children sit on wooden benches reading storybooks. This is the first "knowledge train" that visits villages in the southern Gaza Strip to encourage children to read and to develop their linguistic and creative skills.

Khalil Fares, the director of Shorouq wa Amal Center, which is affiliated with the Culture and Free Thought Association (CFTA) in Khan Yunis, told Al-Monitor, “The knowledge train is the first initiative launched by the center in cooperation with education associations affiliated with the CFTA and others like Asdaa Recreation Center. The latter lent the train to the center as a contribution to encourage children to learn and read.”

Fares said, “The knowledge train took off on March 15 and will maintain its activities for a month and a half. The initiative is set to end on April 30. This annual activity is organized by Shorouq wa Amal Center. We sought a rare and unfamiliar way to attract children to read, and this is how the idea of the train emerged. Children really warmed up to it. The train targets around 200 children per day whose ages range between 6 and 12 and who are eager to learn new things. The train provides them with [the opportunity to access new] knowledge and improves their behavior, encouraging a special and cultivated generation.”

He added, “The train stops at all public and UNRWA-affiliated schools in Khan Yunis and also heads to remote areas in the east of the governorate. The organization coordinates with the Ministry of Education and Higher Education and civil associations to determine the times and places of the train visits so that the children are notified in advance.”

“The train offers many activities; it includes more than 150 storybooks as well as plays that talk about the childhood of Palestinian authors such as Mahmoud Shukair, Ghassan Kanafani and poet Jabra Ibrahim Jabra. So the children are introduced to the most influential authors and poets in the Palestinian territories,” he noted.

Fares continued, “The knowledge train organized a Skype interview with Shukair to discuss his own childhood and his experience [as an author] with the children; he answered the children’s questions and boosted their self-confidence.”

He said, “The knowledge train also includes educational puppet shows for children to focus on their virtues because children can connect with theater in different ways. The storyteller wearing a cloak and a red hat and holding a big storybook is also an entertaining part of the initiative. Children gather around him while he tells exciting stories. And this has helped them disconnect temporarily from their worries.”

“Children are given the freedom to closely explore the inside of the train and are told to pick their favorite stories. The aim is to create a safe environment that encourages awareness and intellectual growth. Diverse stories and books are chosen carefully in order to engage the children and encourage them to read in their free time, despite the limited number of libraries in the Gaza Strip,” Fares said.

He noted that the train visits each school only once for two hours in the day due to the large number of schools in Gaza, in order to offer its services to different schools in different areas.

“Shorouq wa Amal Center collaborates with El-Amal Rehabilitation Society for the physically disabled, which is affiliated with the Palestinian Red Crescent in Khan Yunis, to give children with special needs the opportunity to board the train and share the experience of reading and watching humorous performances with their peers [from regular schools]. We want to take care of them and encourage them to read,” Fares said.

According to UNRWA, the Khan Yunis refugee camp where around 68,000 refugees live is suffering from unemployment, lack of houses and infrastructure and power cuts.

In one of the train cars, Hadil Najjar, 12, sits in a wheelchair and holds a comic book. She seems happy from the expression on her face, telling Al-Monitor, “I spend a lot of time in this wheelchair without doing much. The train has given me the chance to read various stories and listen to the storyteller who draws a smile on my face. I could not read or listen to these stories before because they were not available in our village.”

Najjar was injured during the 2014 Gaza war, after her house was targeted by Israeli artillery fire that wounded most of her family members.

She said, “I dream of more attention for children with special needs through special and equipped libraries that we can access despite our disability. I want to be able to regularly visit the library, listen to stories and read to improve my intellectual abilities.”

Nour Abu Jazar, 10, who carefully listens to the storyteller, said, “The train contains many photos and stories that are missing in the city’s schools and libraries.”

He added, “We hope the train would stay for the whole year so that we could read many books and benefit from the services of the knowledge train. The train now only stays for a couple of days a year.”

When asked about the challenges facing this initiative, Fares said, “The center needs support from local and international associations that care for children in order to expand the scope of our activities and increase the number of books available. We want to fulfill the needs of the large number of children interested in the initiative. We can't, for instance, lend books to the children because of the limited number of books available. We want to allow children in other regions to read these books and benefit also.”

He added, “The current books we have were provided by Shorouq wa Amal Center’s library. We are currently seeking to form a committee for Palestinian children in cooperation with associations that is tasked with boosting children’s knowledge.”