The Taghyeer foundation has started a bus project that takes prominent internet activists on tours of marginalized areas in the West Bank in hopes of bringing about positive change. 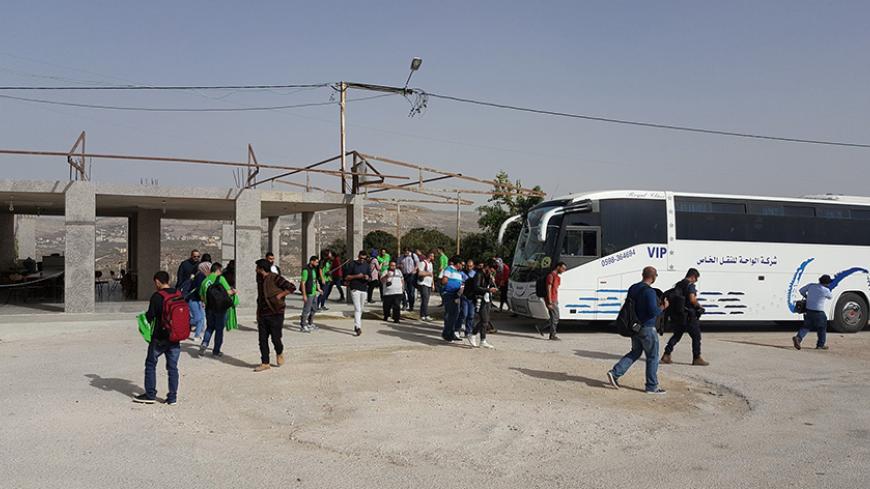 RAMALLAH, West Bank — A group of 50 journalists, bloggers and social media activists has embarked on a blogging tour in a bus sponsored by the Taghyeer media organization. On the morning of Nov. 4, the bus left for the town of Sebastia, northwest of Nablus, and the Village of Kur, southeast Tulkarm, both in the northern West Bank.

This is the second tour for the Social Media Bus in less than a month. The first started off Oct. 15 in the city of Jericho and visited several archaeological and natural sites suffering from neglect in the province, including Wadi Qelt and Nabi Moussa. The bloggers encouraged Palestinians to visit these areas and urge officials to focus on ailing sites.

The Social Media Bus idea produces vlogs, photography and articles about the geography and history of certain sites in Palestine to show them to the public and officials and urge them to bring about change. This tour aims to highlight the Palestinian authorities’ neglect of those sites and the weak tourist activity in those areas through social media posts including interviews with citizens and local officials. The group's posts were tagged with the hashtag #SMBUS and its Arabic equivalent.

From the city of Ramallah, the bus went to the town of Sebastia, some 60 kilometers (37 miles) away, with 50 bloggers and journalists on board. They were selected by the Taghyeer foundation officials based on their popularity on social media, their careers in local, Arab or international media outlets, and their skills in preparing written and visual reports. Chief among the participants was storyteller Hamza al-Akrabawi, who served as a tour guide as he gave historical background on all the sites visited.

The town of Sebastia, where the bus made its first stop, is one of the most important archaeological sites in Palestine, with sites belonging to seven civilizations that successively settled in the town since the Iron Age (900-548 BCE) up until the Ottoman Empire, during which the Prophet Yahya Mosque was established in 1892. Chief among these sites is the al-Ras Church, which was reportedly built over the place where John the Baptist (Prophet Yahya) was decapitated. Other sites found in the town include the Roman amphitheater, the Basilica Square and the street with 600 ancient columns.

The tour then passed by the village of Kur, Palestine's smallest, where the population belongs entirely to the Jayyousi clan. The village includes historical castles, the oldest of which dates back to the Mamluk era (1260-1516), while some date back to the Ottoman era (1516-1916). All the sites suffer from neglect and need restoration. They now face another problem, as a quarry has been established near them. The explosives being used there threaten to damage the castles and even lead to their collapse.

Saed Karzoon, Taghyeer's director, told Al-Monitor, “The idea of ​​the Social Media Bus is to bring bloggers, journalists and social media influencers together to highlight a cause and bring about positive change.” The Social Media Bus is an extension of a project by the Taghyeer foundation two years ago.

“The first blogging bus began in January 2014 under the name ‘Blog from al-Aghwar,’ which is located to the east of the West Bank near the Jordanian border. At the time, the bus tour was intended to highlight the suffering of the citizens and share their stories and daily problems. They lived in Area C and were in need of power and water services. Also, their houses were constantly raided by the occupation forces and evacuated by the army for military training purposes. As such, bloggers wanted to raise awareness through social media and promote the al-Aghwar Palestinian narrative that the area is Palestinian,” Karzoon said.

Karzoon said he hopes to expand on the idea of the Social Media bus by inviting ministers and officials to take part in it and talk to participants, answer their questions and address specific issues.

For his part, Akrabawi, the guide touring with the bloggers, told Al-Monitor, “The youth tours are visiting Palestinian areas that are diverse in terms of their natural settings and histories as well as marginalized places in order to document the stories, history and suffering of the people.”

He added, “The youth tours are reviving the Palestinian homeland and presenting it through a different lens using live observations and real contact. This leads to experiences that educate [participants] in terms of geography and history. A cultural youth activity that is unaligned with any political side is using social media to present the Palestinian homeland to the largest audience possible.”

Moaatassem Alawi from Nablus took part in the project. Alawi usually scours areas of the West Bank alone to get to know them and vlog about them, mainly through Snapchat.

Alawi told Al-Monitor that thanks to these tours he is getting to know Palestine and satisfying his passion for culture and the lives of the ancient people who lived in the places he visits.

Alawi said, “I finished studying engineering in the Hashemite Kingdom of Jordan in 2014 and returned to Palestine and started my travels in November 2014.”

He added that his posts are widely followed by friends and fans as he focuses on travel advice, like directions and details about the places he visits to encourage followers to visit them.

Alawi, whose travels sometimes last for 30 days, faces many obstacles. For fear of running into Israeli soldiers, he cannot carry a knife or any other sharp object that he might need to eat, climb, erect tents or defend against animals. He sometimes dresses as a foreign tourist to avoid problems with the army or the settlers.

Asked about the importance of blogging, Alawi said, “Social media is as free media that allows us to reach out to thousands of followers at the lowest cost, and this was not available years ago.”

Blogger and social media activist Mahmoud Hureibat told Al-Monitor that blogging conveys important issues to citizens and officials as it spreads national culture among the younger generation about the history and geography of Palestinian areas.

Despite the importance of blogging and its ability to shed light on many issues, there are questions as to whether such acts can help pressure decision-makers and institutions bring about change on the ground.