Five young Palestinians are organizing tours of Nablus on donkeys to promote domestic tourism and the traditions of their ancestors. 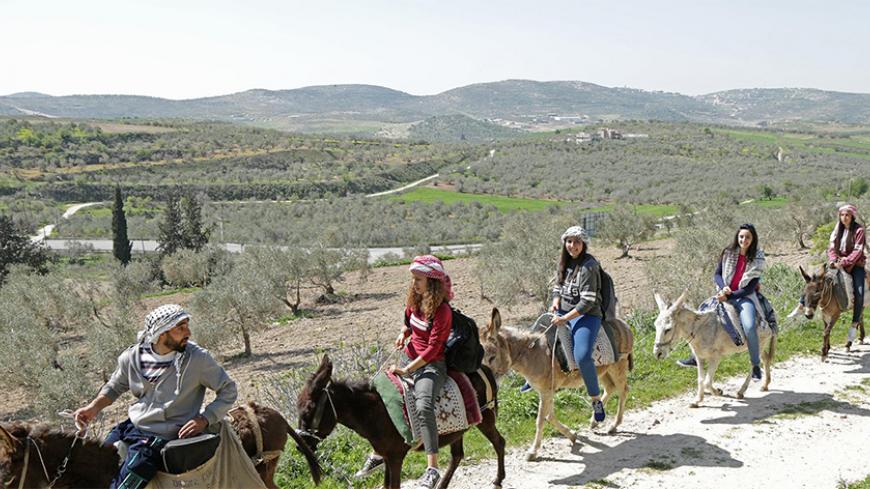 A group explores the Palestinian countryside on the back of donkeys as part of a tour organized by Donkey Tours. Posted April 6, 2017. - Facebook/DonkeyToursPalestine

NABLUS, West Bank — Five friends were hanging out in a cafe and came up with an idea that would be profitable and fun at the same time. One of them asked jokingly, “Why don’t we organize tours on donkey back?” At first his friends scoffed at him, but the next day they realized and agreed that it was a brilliant idea.

The five friends, who are from the town of Sebastia, northwest of Nablus, are final year students at An-Najah National University. Four of them are majoring in engineering and the fifth in veterinary medicine. They began to raise money to buy donkeys. Each contributed 1,000 Israeli shekels ($274) to buy five donkeys.

They launched Donkey Tours in mid-February 2017. The first of its kind in the city of Nablus, Donkey Tours allows people to tour the city on the back of a donkey.

Dating back 3,000 years, Sebastia is seen as one of the most important archaeological towns in Nablus governorate and the largest archaeological site in Palestine. It is also home to ancient Roman ruins.

Given its historical archaeological significance, the town lies within the borders of Area C, which is administratively and legally controlled by Israel under the 1993 Israeli-Palestinian Declaration of Principles (Oslo Accord).

Yazan Kayd, a Palestinian activist and one of the people behind the Donkey Tours initiative, told Al-Monitor, “At first, people in the town of Sebastia found the initiative to be a little peculiar, but later decided to give it a try. We chose the donkey because it was the means of transportation in the Palestinian countryside.”

“In the past, our grandfathers used to ride on donkeys, and today this animal is rarely used by Palestinian farmers. This is why we decided to use donkeys in our tours given the historical link of this animal to the land of our ancestors,” he added.

Now the group has 16 donkeys.

The first tour that took off in mid-February included four people from the town. However, in the most recent tour on April 7, the number of participating people reached 14, mostly tourists from outside the town.

Kayd said that tours are organized on Fridays and Saturdays once a day, noting that every tour is a 20-kilometer (12.4-mile) ride that takes up to seven hours.

“The tour starts from the town of Sebastia, through the streets of Columns, the Massoudieh area, which was previously an Ottoman railway, and ends in one of the natural valleys,” he said.

The tour costs 75 shekels ($20) per person and includes a ride from the city of Nablus to Sebastia and breakfast.

During the tour, the business owners promote positive ideas such as encouraging their customers to preserve the environment and animal welfare.

“People have this misconception that animals need to be beaten to move forward. We try to dispel this misunderstanding and tell them that donkeys need to be treated gently without a stick,” Mufid al-Haj, one of the five young men behind the idea, told Al-Monitor.

He said that they are also keen on supporting national products by offering a Palestinian breakfast. “Our tour includes a breakfast prepared on firewood, which is part of the customs and heritage of the Palestinian families who used to dwell in the countryside,” he said.

He added that the group started their own Facebook page to promote their initiative, noting that it was well-received by the public, given the increased number of families participating in the tour.

As summer approaches, the Donkey Tour organizers are planning camping trips during the tour so as to not walk under the scorching sun during the day.

The Donkey Tour initiative is a youth initiative that promotes the culture of sightseeing and the sense of belonging to the land and to increase the people’s steadfastness in Palestine.

The originators of the idea did not receive any support from the government or any other institutions. They rely on self-funding, and the proceeds they receive are from tourists. They are now working on extending the tour to reach neighboring towns and villages.