Residents of the West Bank village of Kur have been complaining for a decade that a nearby stone-crushing operation is harming the environment and threatening their historic landmarks and homes. 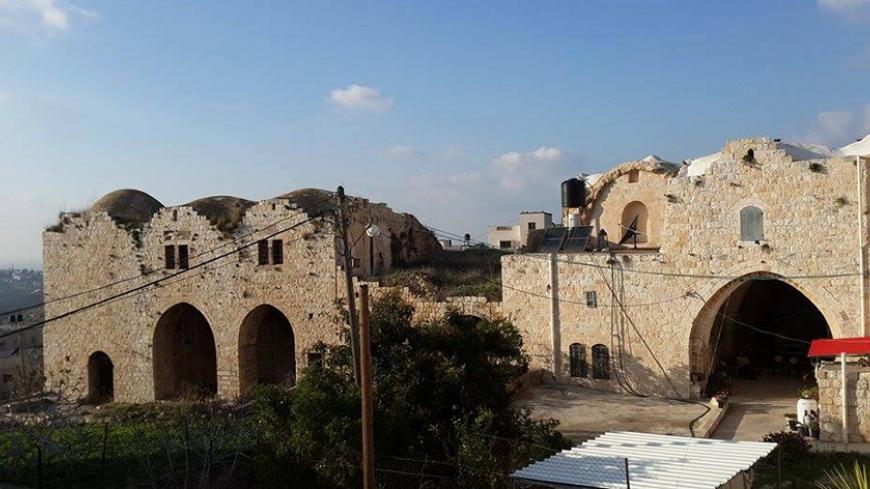 These buildings illustrate the distinct domed architecture found in the village of Kur, on the West Bank, in an undated photo. - Facebook/PalestineTV

RAMALLAH, West Bank — The historic village of Kur, southeast of the city of Tulkarm, is known for its architectural heritage, including its domed buildings and castles, the oldest of which dates to the Mamluk era (1260-1516), while others were built by the Ottomans (1516-1916). According to residents, Kur's cultural landmarks suffer from general neglect, but what really concerns them is the threat to the buildings, and to their sanity, caused by a nearby stone-crushing operation.

The citizens of Kur (pop. 350) have held numerous protests and demonstrations since the quarrying began, in 2006, between Beit Lid, Sfarin and their village. The protests were halted in 2008, when a court temporarily suspended the operation — which extracts large rocks and then crushes them into small chunks for use in construction materials — but resumed after the court's final decision allowed it to continue in 2012 due to a lack of evidence of harm. Residents staged their most recent protest Nov. 1 at the Council of Ministers in Ramallah.

Kur local Farid Jayyousi told Al-Monitor, “The town’s inhabitants are constantly feeling the ground shaking, akin to an earthquake, because of the use of dynamite to break up the rocks. We fear this shaking affecting our houses and the old buildings in the village, as they are likely to be cracked as a result of the explosions at the stone-crushing site. We have been demanding the closure of this crushing site for 10 years now. There are already cracks in some historical buildings because of the explosions affecting the integrity and strength of the buildings.”

Jayyousi explained that over the years, Kur citizens and local councils have submitted petitions about the stone crushing to several government authorities, including the Local Government Ministry, the Environmental Quality Authority and the High Planning Council. “The competent authorities do not care about this issue,” he said.

Saleh Tawafsha, the general director for safeguards at the Tourism and Antiquities Ministry, told Al-Monitor, “The ministry received complaints from citizens in the village and the local council about the stone crushing and its impact on the historic buildings. We made several field visits to the historical landmarks and examined the buildings as a preliminary step. We did not find any negative effects from the explosions. However, we need a reliable scientific report from an engineering office on the impact of the explosions on the buildings to be advised on the necessary steps to be taken to this effect.”

Salim al-Takrouri, the general manager of Al-Mawared for Stone and Marble Company, the company doing the stone crushing, told Al-Monitor, “We use scientific instruments to detect shaking during explosions, which revealed that these vibrations fall within the permitted legal scope.” He also noted, however, that his company is in the process of signing a contract with An-Najah National University’s Earth Sciences and Seismic Engineering Center to conduct a study of the shaking produced by the explosives, stressing that the company has a license to conduct the crushing and blasting operations in Kur from the appropriate authorities.

Jalal Dabbeek, the general coordinator of An-Najah National University's scientific centers and director of the Earth Sciences and Seismic Engineering Center, told Al-Monitor, “To gauge the impact of explosions and shaking in any area, a scientific study must be carried out to determine the speed of movement of soil particles as a result of such explosions. Should the soil particles near the building move at a speed less than the permissible limit, they pose no threat, but if the speed goes beyond this limit, it becomes a threat to buildings.”

Criticism of the crushing operation has not been limited to its impact on historic landmarks in Kur. Aahed Znabit, the Tulkarm branch director of the Ramallah-based Palestinian Agricultural Relief Committee (PARC), told Al-Monitor, “The crusher has a number of negative effects on ​agriculture, the environment and the health of the population, as the dust it emits destroys the nearby olive trees and reduces their production and kills [other] plant and animal wildlife in the region.”

Znabit said the olive trees' production has fallen by 75% due to the damage they have sustained, a claim denied by Takrouri, who emphasized that the crusher meets all the necessary conditions and environmental requirements.

Takrouri further explained, “The crusher was bought from its previous owner, Al-Sharqiah Company, which is a company owned by businessmen from Nablus, back in 2008. We have worked on developing it and completing the procedures relating to its license from the Ministries of Economy, Agriculture and Environment.”

PARC organized an open dialogue forum held Nov. 22 in Tulkarm to study the impact of the stone-crushing activity. The speakers and participants included directors and representatives of ministries and public institutions — including the Environmental Quality Authority, the Ministry of National Economy, the Ministry of Agriculture, the Ministry of Tourism and Antiquities, the Ministry of Health, the Ministry of Local Government and the Union of Agricultural Engineers — as well as a number of nongovernmental institutions. Znabit said that several recommendations emerged from the dialogue, in particular prohibiting additional crushers in the vicinity and the need to remedy the damage caused by the existing one.

For now, however, it seems that the citizens of Kur will continue their protests against the activity they say threatens the environmental, agricultural and cultural heritage of the region.