Palestine is situated near geological fault lines, and a lack of planning and proper infrastructure means that a large earthquake could have disastrous results. 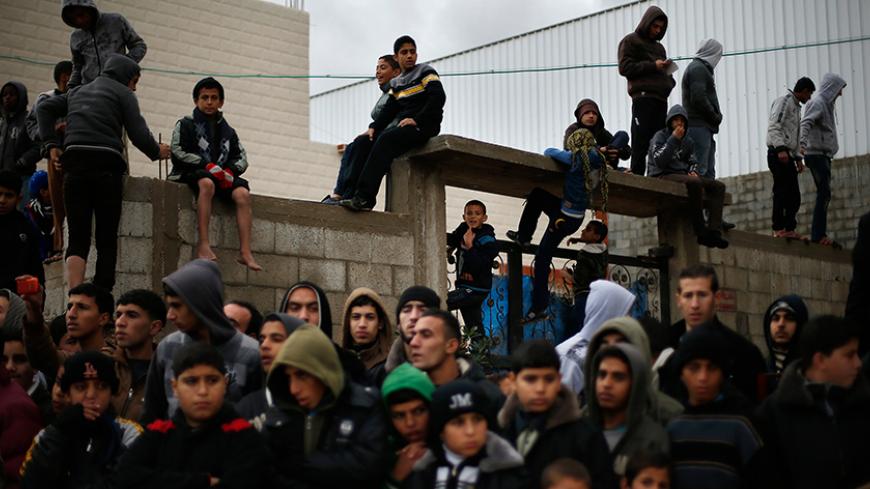 Palestinians watch as members of the Palestinian Civil Defense evacuate people after their houses were flooded with rainwater on a stormy day in Gaza City, Dec. 13, 2013. - REUTERS/Mohammed Salem

RAMALLAH, West Bank — An earthquake that measured 5.2 magnitude hit Palestine on June 27. Since the earthquake, whose epicenter was in the Red Sea region, the Earth Sciences and Seismic Engineering Center at An-Najah National University in Nablus has been tracking seismic activity south of Aqaba.

This earthquake was one of hundreds that had been tracked by earthquake detectors in the region since the beginning of the year, which prompted experts to renew their calls for increasing preparations to face a possible earthquake. Studies indicate that Palestine, which is situated in a seismically active region, would be greatly affected by a strong earthquake.

Jalal Dabbeek, director of the Earth Sciences and Seismic Engineering Center, told Al-Monitor, “Our region is considered seismically active, and it might face a strong earthquake that could reach a magnitude of 7.” He added, “Scientific studies show that earthquakes are just a matter of time. They might happen today, tomorrow, in a month or in years, because the Earth’s core is in constant motion.”

Scientific studies and predictions point to an increasing likelihood of an earthquake because Palestine is situated in the Rift Valley, which is bordered by the Arabian Plate to the east and the African Plate to the west. Since both plates are moving farther apart, Palestine moves away from Jordan to the south at a rate of 5-7 millimeters (0.19-0.27 inches) yearly, thus causing great pressure in the rocks, which could lead to earthquakes.

Mahmoud al-Qaryouti, head of the Natural Resources Authority, told Al-Monitor, “The worst scenario for a possible earthquake would be [one that would cause] the death of 10,000 people in Amman alone.”

Meanwhile, the Israeli newspaper Yedioth Ahronoth on June 28 cited earthquake experts who said that “a massive earthquake would lead to the devastation of more than 70% of Israeli houses.” The Committee for Earthquake Preparedness estimates the deaths of 16,000 people should such a scenario occur.

Commenting on Palestinian predictions, Dabbeek said, “If an earthquake measuring 6-7 [magnitude] happens, the losses will be huge. This magnitude is not considered strong in terms of [other earthquakes around the world], but the problem is we are not well-equipped to face it.”

He added, “We expect the death of 5,000 to 8,000 people, not to mention damage to buildings and facilities due to the nature of construction and materials used. Palestine is not well-prepared to face catastrophes, but it has come a long way in amending the laws governing the construction system to resist earthquakes.”

Palestine is working on a project to reduce earthquake threats in the country through the SASPARM-European FP7 project, which is being implemented in cooperation with several international organizations that work in the same field.

Dabbeek, who heads the Palestinian team working on the project, said, “The first stage of the project in which European-funded ministries and organizations participated is complete. Hundreds of engineers in the field of planning and designing buildings that are resistant to earthquakes were trained, and dozens of sessions and workshops on the topic have been held.”

He added, “We are currently working on the second stage, which aims at promoting [Palestine’s] capacities in facing earthquakes by training civil defense cadres and developing the skills of engineers. We hope to improve the existing buildings through computerized programs and smartphones that save information about the house of each citizen. This would help in building a database to discover the likelihood of these houses being affected. Buildings will also undergo a field survey, and awareness campaigns will be increased in the media.”

Majdi Saleh, the director of the Syndicate of Engineers, told Al-Monitor that, as of early June, the syndicate told all engineering offices to design public and private buildings in a way that is resistant to earthquakes.

“The buildings that are designed and constructed are being directly monitored to check if they comply with resistance to earthquake rules. The projects were implemented, and the cost difference compared with regular buildings was only 5%,” Saleh said.

Wassef Oreikat, the head of the National Committee for Disaster Risk Reduction, told Al-Monitor, “The Palestinian Civil Defense Law No. 3, dated 1998, states the responsibility of the civil defense and official authorities in the Palestinian Authority to face disasters.”

Oreikat emphasized the importance of implementing the Hyogo Framework for Action that considers disaster management as a national priority. He believes it should be part of the state’s budget. He urges the enhancement of humanitarian and material capacities of the civil defense, in addition to implementing laws and legislating new ones to execute the earthquake code in Palestine.

Moufid al-Hasayneh, minister of public works and housing, told Al-Monitor that the Palestinian capacities to face disasters are weak. He said, “We have modest and undeveloped capacities that do not allow us to face earthquakes and their repercussions well. Ministries are deploying efforts within their means in terms of awareness and education.”

Hasayneh said that the ministry and organizations are trying to benefit from the experience and capacities of other countries such as Jordan and learn from their research and studies to acquire plans of action in times of disaster.

There are several factors sparking the fears of Palestinians every time the possibility of an earthquake is mentioned. The country’s capacities are weak, and so is their experience in facing earthquakes and emergencies. Moreover, the nature of traditional construction, the recent bad experiences with snow falling at low altitudes, Israel’s tight grip on border regions and the lack of seaports and airports are all sources of anguish for Palestinians who can imagine the devastating losses a major earthquake would cause.