Israel’s scenario of the 'big' earthquake

A devastating earthquake strikes the region about once every century, so Israel — statistically at least — is closer than ever to another deadly tremor. 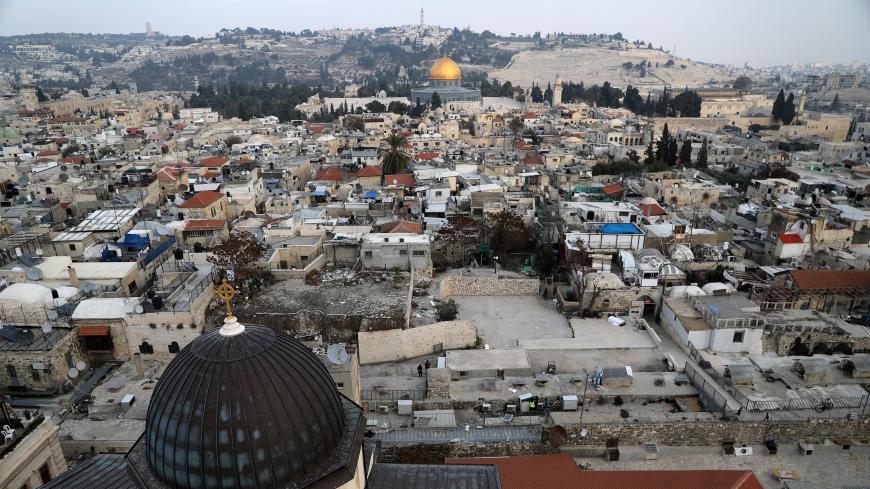 A general view shows part of Jerusalem's Old City and the Dome of the Rock, Jerusalem, Dec. 5, 2017. - REUTERS/Ammar Awad

A magnitude 4.4 earthquake struck the Mediterranean on May 15. Tremors were felt in many cities throughout Israel, raising the public panic level. It is a fact that significant earthquakes have struck Israel and the immediate region every 90-100 years, with the last major earthquake occurring in the northern Dead Sea region in July 1927. Over 300 people were killed in the quake, which caused significant damage in Jerusalem, Jericho, Ramle, Lod, Tiberias and Nablus. Statistically, Israel is now closer than ever to another devastating earthquake.

In July 2018, the State Comptroller published a report titled “National Preparedness for an Earthquake: Buildings and National Infrastructures.” According to the report, a major earthquake in Israel is a near certainty, and it would have an enormous impact on various regions throughout the country. “Based on the Preparedness Program approved by the government, Israel should be ready to deal with 7,000 dead, 8,600 severely injured, 37,000 lightly injured, 9,500 victims trapped in the ruins of buildings, and 170,000 people left homeless,” wrote the State Comptroller.

Other scenarios anticipate as many as 20,000 dead and many more Israelis left homeless. According to Efraim Laor, founder of AFRAN - National Research Institute for Disaster Reduction, some 320,000 buildings would be damaged in an earthquake. “And I think that’s a low estimate,” he added.

These estimates are based on the fact that most residential buildings in Israel were not constructed to withstand earthquakes. The current standard first went into effect in 1975, and only became compulsory in 1980. “There are 80,000 buildings in Israel that were constructed before 1980 and are now in real danger of collapse in the event of an earthquake. Israel is far from prepared for a disaster of this magnitude,” professor Eran Feitelson of the Hebrew University’s Department of Geography told Al-Monitor.

Feitelson is a member of a group of researchers that produced in 2018 a comprehensive study of government preparedness for earthquakes. “Earthquake readiness consists of three components: before the event, which involves reinforcing existing buildings; during the event, which involves search and rescue; and after the event, which involves rehabilitation and reconstruction,” he said. “We have a big problem with everything to do with reinforcing and renovating existing buildings. On the other hand, we are in a relatively good state when it comes to rescuing and providing medical treatment to the victims, thanks to the Homefront Command. If there is an earthquake, the biggest catastrophe would take place after the event. The State of Israel has no plan to deal with a scenario in which we have 170,000 people without shelter. We may suppress the idea, but if there is an earthquake we could face a widespread crisis. Similarly, very little has been done to prepare infrastructures for an earthquake. Most public buildings should have been reinforced, but they were not, and most homes in Israel are in danger of collapse in the event of an earthquake.”

“Most Israelis live near geological faults, where powerful earthquakes will certainly occur. Tens of thousands of buildings throughout the country were not planned to withstand tremors like that,” seismologist Avi Shapira told Al-Monitor. As the former head of the Inter-ministerial Steering Committee for Earthquake Preparedness, Shapira wrote a detailed report on the matter. “What the minor earthquakes we have experienced tell us is that there is an active seismological fault currently undergoing minor shifts. At some point in the future, it will cause major shifts,” he said.

He noted that there are two focal points for earthquakes in the region: the Mediterranean Sea and the Afro-Syrian Rift. “The bigger risk is the Afro-Syrian Rift that stretches from Eilat to Kiryat Shmona,” he said. “The main concern there is a magnitude 7.5 earthquake. The region is also home to many people, who live in old buildings.”

One person who is not particularly concerned about these horrifying scenarios is professor Moshe Inbar, an expert on natural disasters at Haifa University. “Where did they come up with this number of 7,000 casualties? Why not 70,000?” he asked in a conversation with Al-Monitor. “If we compare ourselves to California, they had about 10 incidents of 7-plus magnitude over the last few years, yet not one of these incidents claimed more than 100 casualties. Furthermore, it is important to remember that California is 10 times the size of Israel. Chile had an 8.8 magnitude earthquake, and there were only a few hundred casualties there too. And scenarios concerning the destruction of homes are similarly exaggerated and refutable.”

Inbar also has an interesting explanation for the apocalyptic scenarios offered by his colleagues. “My experience as a researcher has shown that if you do not exaggerate your predictions, no one will listen to you. In that case, forget about getting a budget. Politicians need terrifying numbers. Just a few years ago, there was talk of 17,000 casualties in Beit Shean alone. I checked, and what I found was that there weren’t that many people even living there at the time,” he said. “Researchers also have a tendency to stick to the most extreme scenario. Italy wanted to jail three geologists for claiming that there would be no earthquake, and there eventually was one. I have yet to hear of anyone going to prison for exaggerating.”

One government initiative to reinforce buildings is National Initiative Plan 38, which offers entrepreneurs building rights in old residential buildings, provided that they reinforce the structures to withstand earthquakes. The problem is that the plan is not economically viable in the periphery. “National Initiative Plan 38 did damage in that it created the false illusion that the problem was being handled,” Feitelson noted. “Take the town of Beit Shean for example. It sits on the Afro-Syrian Rift, yet I don’t know if a single building there was involved in any National Outline Plan project. On the other hand, dozens of projects have already been implemented in much lower risk areas such as Tel Aviv and Ramat Gan, and hundreds more are set to take place there.”

The former deputy commander of the Homefront Command’s National Rescue Unit, Lt. Col. (Res.) Eran Magen, has been involved in rescue missions around the world for over 25 years. He told Al-Monitor, “There will be chaos in the first two days after an earthquake. The scenarios speak of thousands of homes destroyed. There are no professional teams capable of handling that quantity. That's why we are trying to train local teams to serve as first responders in most instances.”

The Ministry of Defense and the Homefront Command has a program in conjunction with Magen to train tenth grade students to participate in light rescue efforts. It’s a unique program, unlike anything else in the world.

Magen is convinced that because of the high security risk, Israel is better prepared to deal with a major earthquake than many other countries. “The Homefront Command is one of the leading earthquake search and rescue groups anywhere in the world, and the Israel Defense Forces [IDF] are continuing to accumulate experience,” he noted. “I participated personally in at least 10 IDF missions involved in search and rescue efforts around the world. Over the last few years, we have also seen the military share much more information with local authorities and civilian rescue services. This is particularly important, because when push comes to shove, everyone will have to take care of themselves in an emergency. We can’t wait for the big army to come rescue us.''