Wednesday's earthquake in Duzce has rekindled memories of quakes that struck Turkey in 1999, worrying many about future disasters. 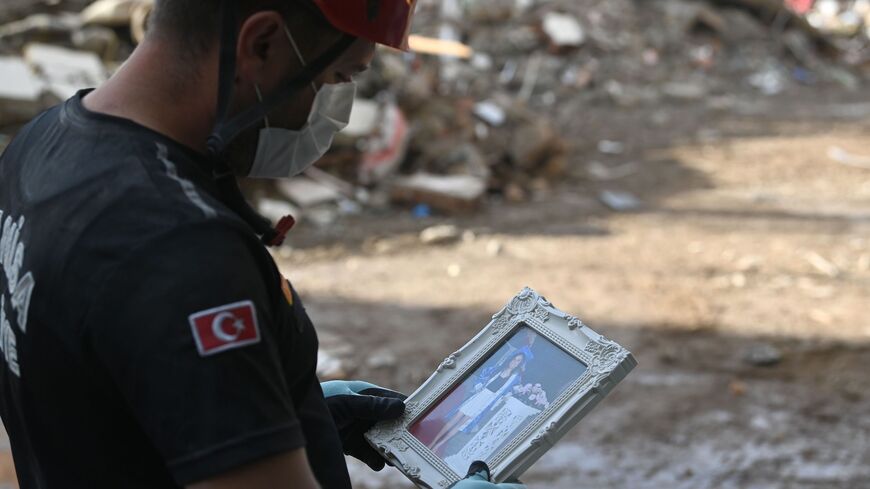 A rescuer looks at a picture found in the wreckage of a collapsed building in the city of Izmir on Nov. 2, 2020, after a powerful earthquake struck Turkey's western coast and parts of Greece. - OZAN KOSE/AFP via Getty Images

ISTANBUL — Shortly after four o’clock on Wednesday morning a powerful earthquake struck a town east of Istanbul, sparking fears of another hitting the city of 16 million and questions over the country’s preparation levels.

The epicenter of the 5.9 magnitude earthquake hit the town of Golyaka in Duzce province, 170 kilometers (106 miles) from Istanbul. Some 80 people were injured, the Turkish emergency response agency said. Two people reportedly died from heart attacks.

The tremor was felt in Istanbul and as far away as Edirne near the Greek border and Izmir on the west coast.

The location evoked memories of deadly earthquakes that hit the region in 1999, when some 800 people were killed in Duzce. Three months earlier more than 17,000 died when a 7.6 magnitude tremor struck Kocaeli, just east of Istanbul.

Although significant earthquake preparations were recommended after the 1999 disasters, experts have frequently warned about the ongoing risks of a large quake striking a population center as large as Istanbul, which sits on the North Anatolian Fault Line. Researchers predict a 95% chance of an earthquake of 7.0 magnitude or stronger hitting the city in the next 70 years.

A tremor of that strength would heavily damage or destroy an estimated 194,000 buildings, according to the latest version of Istanbul’s Earthquake Master Plan, published in 2018. It would leave more than 10% of the city’s residents homeless.

The Union of Chambers of Turkish Engineers and Architects raised the alarm over the country’s housing stock, saying in a statement Wednesday, “Unfortunately, our country has failed in terms of what needs to be done before the earthquake,” and “It is essential that the design, construction and inspection processes are carried out in a correct and vigorous way in order to ensure the safety of buildings against earthquakes. In each of these three pillars of safe construction, it is known that there are serious problems both legally and in practice.”

On building sites around the country, site supervision “continues to be seen as a procedure on paper only,” the union added, explaining that more than 90% of Turkey’s 85 million population lives in an earthquake-risk area, yet the level of earthquake resistance in the building stock is nonexistent and it is “uncertain how the structures will be affected in a possible major earthquake.” The statement said “no serious progress” had been made since 1999.

Some of the most at-risk structures are unregulated buildings constructed over the last couple of decades to house the city’s growing population. The government has responded to this irregular construction by offering zoning amnesties. The last one in February 2019 received applications about 7.4 million illegal buildings.

The engineers and architects union called for such schemes, which it said encourage illegal construction by retrospectively legalizing dangerous buildings, to be abandoned.

“One of the important issues is the zoning amnesty," which is could happen again as elections approach next year, said geophysics professor Ovgun Ahmet Ercan. “To grant the zoning amnesty, which has been made before, means that uncontrolled illegal structures are legalized by giving money to the state.”

Istanbul Mayor Ekrem Imamoglu called on the government to urgently sit down with his administration to formulate a comprehensive earthquake plan.

“Let’s get together in Ankara, let’s sit down and talk,” he said at the opening of a train maintenance facility in Istanbul. “Today, there are nearly 150,000 buildings in Istanbul that need to be addressed urgently. … We will accomplish this kind of work together with courage.”

Wednesday’s quake came just over a week after a nationwide earthquake drill. Following the exercise, Interior Minister Suleyman Soylu said Turkey was in a “better position than many developed countries” in terms of disaster management, especially in disaster response.

But Naci Gorur, a geology professor and a member of the Turkish Academy of Sciences, said the country, which is criss-crossed by seismic fault lines, needs a better long-term strategy for earthquakes.

“Our leaders are at the site of the earthquake. They make statements about damage and loss [but] a few hours later, the earthquake is forgotten and we go home again as if nothing had happened,” he said. “A day or two later, the agenda changes completely.”

He added, “We have few casualties today but who can guarantee that there will not be thousands tomorrow?" and "If you build your houses earthquake safe, you will not get a lot of damage in the earthquake. If you take scientists seriously, prepare in line with their predictions and take precautions. You will ensure the safety of our people.”