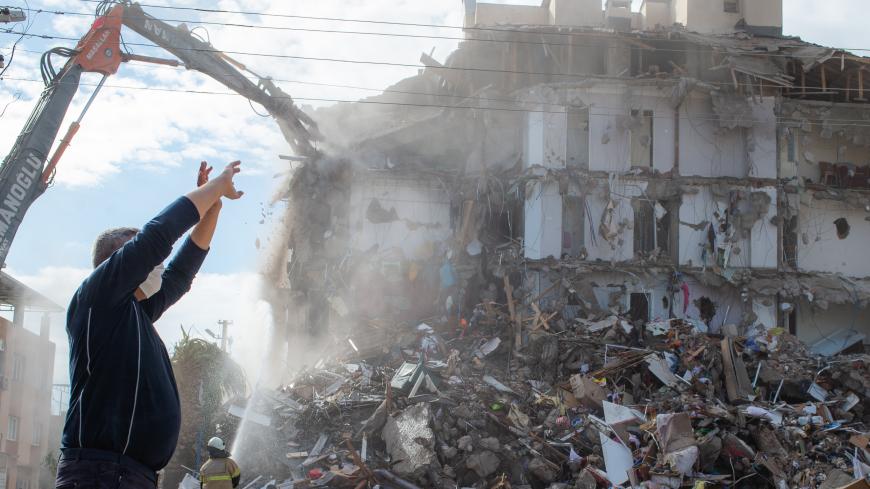 A firefighter watches as a damaged building is demolished in a controlled manner during the ongoing search operation for survivors and victims at the site of a collapsed building in the city of Izmir on Nov. 2, 2020, after a powerful earthquake struck Turkey's western coast and parts of Greece. - YASIN AKGUL/AFP via Getty Images

ISTANBUL – Fatma Demirer, a lawyer in Izmir, was visiting a client in prison when a strong earthquake hit the city Friday afternoon on Oct. 30. She had left her cell phone at the prison entrance, as is required in Turkey, and when she recovered it upon exiting, she found dozens of messages from family members and colleagues who were eagerly awaiting her response.

Demirer soon learned her office building had collapsed and her co-worker Sercan Turgut was inside.

“I immediately called Sercan,” Demirer told Al-Monitor. “He answered and said ‘Our office is completely destroyed. I am in it, but I am okay. Please rescue me.”

When Demirer arrived at her office, she said the nine-floor building it was in had been reduced to two floors of rubble. The office was located in the Bayrakli district of Izmir, which was one of the areas to experience the most damage during Friday’s earthquake.

Emergency crews rescued Sercan, who had minor injuries, from the wreckage Friday evening, but others were not as fortunate. Lawyers Murat Duman and son Ozgur, who had been in their office on the building’s third floor, lost their lives when the structure collapsed. Demirer attended their funeral services Monday on Nov. 2.

“I am physically okay, but I am very sad because of my colleagues,” said Demirer, who is a member of the Association of Lawyers for Freedom’s Izmir branch.

On Monday evening, 91 people were reported to have lost their lives as a result of the earthquake, and about 1,000 were injured, according to a statement by the state’s Disaster and Emergency Management Authority (AFAD).

Search and rescue work has been completed on 12 out of 17 collapsed buildings, with emergency crews working on five remaining structures. About 300 buildings experienced at least some structural damage in the event, according to Turkish Vice President Fuat Oktay.

With rescue efforts continuing for the fourth day in Izmir, displaced residents are taking shelter with friends and family or in emergency camps that have been set up by AFAD. Meanwhile, engineers are questioning how to reduce structural damage in future disasters.

“The buildings in Izmir had not been tested by a major earthquake,” Eylem Ulutas Ayatar, Izmir chair for the Union of Chambers of Turkish Engineers and Architects, told Al-Monitor. “However, we should not have experienced this much damage in this earthquake.”

She said many experts are now debating the cause for the extensive damage witnessed in the Bayrakli district. Some engineers are questioning the quality of the soil in the area, but Ayatar said what matters most in an earthquake is the interaction between the soil and a building.

“The fact that one building stands when another collapses next to it during an earthquake proves that it's the building that kills, not the earthquake,” Ayatar told Al-Monitor.

Turkey, a country crisscrossed with active fault lines, is prone to seismic activity. The US Geological Survey rated Friday’s Izmir earthquake as 7.0 on the Richter scale, making it one of the strongest to hit Turkey since a 1999 quake killed more than 18,000 people in the nation’s northwestern area.

Despite the high risk for such events in the region, the rapid development of urban areas in Turkey, as a result of post-1950 rural-to-urban mass migration, has led to some shoddy building constructions that can easily collapse in the event of a strong tremor.

Following Friday’s earthquake, Hurriyet newspaper published reports by local districts that found two of the buildings that had been damaged had been constructed with “low-quality concrete.” The buildings were assessed as “at risk” in separate analyses in 2012 and 2018, but reinforcement work was performed on just one of the structures.

To reduce damage in future tremors, Ayatar said construction projects would need better monitoring in regard to the materials used and the implementation of safe design standards. She said a national earthquake action plan had been prepared in 2010 with the aim to make an inventory of all public buildings and their structural integrity by 2017.

She added, “Our country focuses on fault lines and earthquakes, but the information that matters to people should be: ‘Will my building be damaged during an earthquake? Is it safe?’ The answers to these questions will only come with an inventory of buildings.”

Amid ongoing rescue efforts, some positive news emerged Monday when a 3-year-old girl, Elif Perincek, was found alive after being trapped in the wreckage of her apartment for nearly 65 hours. On Sunday, a 70-year-old man, Ahmet Citim, was also rescued from the rubble.

In a speech Sunday, Turkish President Recep Tayyip Erdogan said new homes would be built as soon as possible, and rental arrangements would be made for people displaced by the earthquake.

“We are determined to heal the wounds of our brothers and sisters in Izmir who are affected by the earthquake before cold weather and rains start,” Erdogan said during an event in Samsun.