After a deadly tremor struck Turkey's east, rescue teams worked around the clock to save dozens from a disaster that sparked both an outpouring of support and fears about the country's unpreparedness for such events. 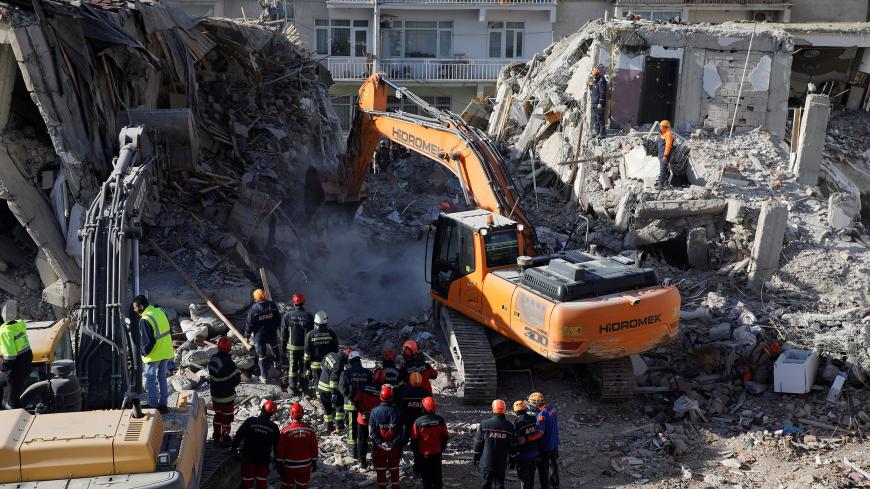 Search and rescue personnel work at the site of a collapsed building after an earthquake in Elazig, Turkey, Jan. 27, 2020. - REUTERS/Umit Bektas

ISTANBUL — The death toll from a 6.8-magnitude earthquake that hit eastern Turkey rose to 41 people on Monday after rescue workers pulled the last two missing victims from the rubble three days after disaster struck, a bitter reminder of the vulnerability of a country straddling active fault lines.

The powerful quake hit the eastern province of Elazig on Friday night, toppling scores of buildings and setting off a race against time to pull trapped women, children and men from the wreckage in freezing temperatures.

Emergency crews saved 45 people as hundreds of aftershocks rocked the area, including two-year-old Yusra Yildiz and her mother Ayse, 35, some 24 hours after they were trapped. Yusra’s father and brother both died.

Husband and wife Zulkuf and Durdane Aydin were reunited with their savior, Mahmud al-Osman, after a video went viral of her thanking him for digging her out of the rubble with his bare hands. Durdane called Osman, a Syrian refugee studying at Elazig’s university, “our hero.”

More than 1,600 people were hurt and 86 people remain hospitalized. The interior minister said 1,000 families were made homeless and are sheltering in tents, sports halls and mosques, and promised to erect residential facilities within two weeks.

Nearly 4,000 rescue workers and 22 dogs were involved in the search operations, according to the state relief agency AFAD. On Monday, they pierced through rubble to find the last two people reported missing, and officials later announced their dead bodies had been recovered. A rescue team formed a circle to pray for the dead after the search was called off.

The disaster unleashed an outpouring of grief and sympathy from Turks as well as from Turkey’s neighbors, including those with whom relations are otherwise tense, like Greece and Armenia.

But it also sparked an angry debate on social media about Turkey’s lack of earthquake preparedness. The chief prosecutor in Ankara opened an investigation into 50 people over alleged “provocative posts” in connection with the disaster.

Opposition parties and opposition-controlled municipalities in other parts of the country raced to provide aid to Elazig and neighboring Malatya province, where four of the victims perished. The People's Democratic Party (HDP), which has faced a clampdown since 2015 over the government’s accusations it has links with armed militants, said security forces had blocked its trucks carrying supplies.

“The blankets, tents and boxes of dry food our party collected cannot be delivered to victims due to the interior minister’s order,” the HDP said in an emailed statement on Sunday.

President Recep Tayyip Erdogan traveled to Elazig at the weekend to attend the funerals of a mother and son who died in the quake and accused unnamed circles of exploiting the disaster for their own benefit. “Our state is not in need of anything. If some people insist on helping, the institutions are obvious — help can be made through AFAD and the Red Crescent,” he said.

Opposition politicians also suggested the government has squandered an “earthquake tax” imposed after a 1999 tremor that killed more than 17,000 people in northwest Turkey, questioning where an estimated $36 billion in tax revenue earmarked for improving safety has gone.

Elazig had suffered a earthquake measuring 6 on the Richter scale just 10 years ago, when 51 people were killed. Tremors are almost a daily occurrence in a country crisscrossed by fault lines, and when large-scale temblors strike, the death toll is often high because of a lack of enforcement of building codes.

In September, a 5.8-magnitude quake jolted Istanbul, Turkey’s largest city with some 16 million inhabitants. Though only one person died from a heart attack, buildings were damaged and nerves heightened that a bigger shock is on its way. The city lies near the North Anatolian Fault, which has seen seven eruptions with magnitudes above 7 since 1939, each time progressively westward.

Seismologists predict there is a 75% chance the section of the fault line running south of Istanbul in the Sea of Marmara will rupture with a force measuring more than 7 by 2040. Some 2 million buildings are unsafe should a major quake strike, experts have said.

Critics say little has been done to safeguard against this apparent inevitability, especially during the last decade or so of rapid construction that has fueled economic growth in Europe’s largest city.

The HDP submitted a parliamentary motion on Monday accusing the government of failing to take action since the September tremor in Istanbul and that the city’s schools, hospitals and other public institutions are still awaiting seismic retrofitting.

“In Istanbul, parks used for emergency meeting points during earthquakes have been turned into construction sites," the party said in an email announcing the motion. "In 1999, there were 470 designated meeting points. That number has fallen to 77 today.”

AFAD denies the claim, saying Istanbul has some 2,300 assembly points. However, experts say the relief agency is counting parks that are not large enough to shelter the city’s residents and lack the capacity to stage an emergency response.