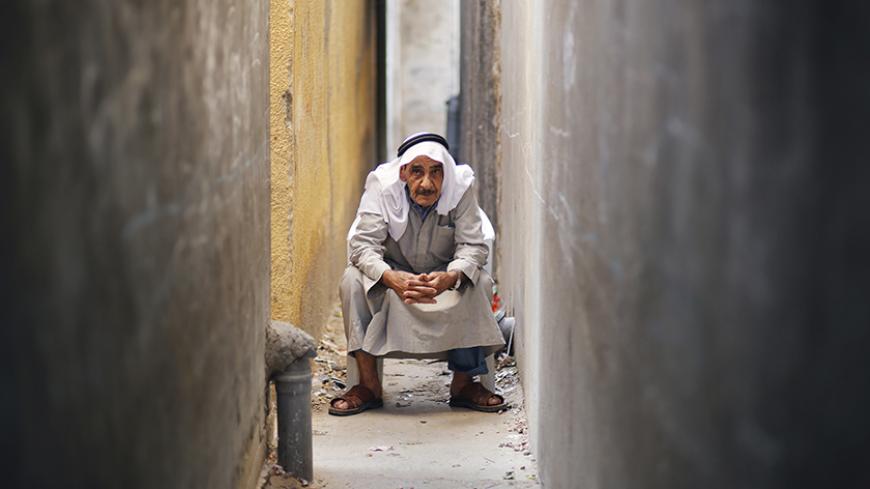 Palestinian refugee Khamis Redwan, 75, is positioned between the narrow alleys of Jabaliya refugee camp in the northern Gaza Strip, May 14, 2013. - REUTERS/Suhaib Salem

JABALIYA, Gaza — Saeed al-Ashkar has spent 20 years interviewing elderly members of various Palestinian families who emigrated to the Gaza Strip from the villages that Israel occupied in 1948, villages that are now inside the Green Line.

Through these interviews, Ashkar collects information about each family’s origins and what its members remember about their original villages. In early 2000, Ashkar used the elderly’s memories to make maps of 20 Palestinian villages located beyond the Green Line. He is still roaming neighborhoods and towns and meeting elderly in the Gaza Strip.

For each village, Ashkar noted the habits of its members, food, clothing and folk dances, such as Dabke, al-Samer and Dahiya. These types of dances originate from the Bedouin in the desert and are often accompanied by traditional poems.

Ashkar said he has been interested in Palestinian heritage since “the occupation’s army arrested me in 1989 and put me in the Negev prison.”

“There, I read a book about the customs and joys of the village of Turmus Ayya in the West Bank. I found myself living in another world while I was in prison. So when I was released in 1993, I decided to write about my original village, Berbera,” he said. “I collected information from the elderly in the family until I finished my book.”

Ashkar’s book, “Berbera Village,” contains a family tree for each family that lived there and now lives in the Gaza Strip. The family trees contain the names of the children and grandchildren. The book, which includes examples of village songs, was published in 2005 by the National Center for Studies and is now available in public and university libraries in Palestine.

Ashkar hopes there will be more official interest and funding for what he is doing so that he can publish similar books about every village and finish drawing maps for 60 villages, as well as maps for the two cities of Jaffa and Ashkelon.

Ashkar said, “These villages are located in Gaza district and most Palestinian families that emigrated to the Gaza Strip are from there. ... But it seems the [funding and sponsoring] issue is difficult. Most institutions are politicized and only support their party members. Only a few [interested friends] support me. So the project is moving very slowly.”

In his book’s introduction, Ashkar wrote, “In the past, immediate and extended families used to get together for weddings. Women used to sing folk songs that relate to our reality and heritage. Men used to dance Dabke, al-Samer and al-Dahiya. And the clarinet and yarghoul sounds used to [entertain everyone]. We now wonder: Where did this heritage go? And why did it go?”

These questions have long haunted Ashkar and have made him feel that he has a great responsibility to preserve the heritage and prevent it from being forgotten. He told Al-Monitor, “No one wears [traditional] Palestinian attire anymore, whether men or women. It has become a tourism item that is sold to visitors for high prices — ranging from $100 to $6,000. The same applies to weddings where everyone plays modern songs that have no taste or color, just noise.”

He added, “A young man today organizes his wedding as his Islamic political party wants. He plays religious songs, but he doesn’t realize that with those songs he is also harming Palestinian heritage, which has never been contrary to the Islamic religion.”

Ashkar said that some causes for the loss of heritage cannot be remedied, such as “the successive colonization of Palestine and the death of the elderly. … These are strong causes that made Palestinian cultural heritage recede from our daily lives.”

Ashkar proudly showed Al-Monitor a video on his mobile phone displaying his home’s garden in the Jabaliya refugee camp in the northern Gaza Strip. He showed the wedding of his son Mohammed, with young people dancing the Dabke to the sound of Palestinian folk songs.

One old wedding custom in Palestinian villages, Ashkar said, was for the entire village to celebrate a villager’s wedding. Hundreds of men and women used to show up without invitation to a “jirn” — a parcel of land roughly 2-12 acres used in harvesting grain and wheat.

He continued, “They start singing one week before the ceremony as they sit on what is called the “mizwad,” a wool carpet made by hand on a loom. Women stand for long hours and shake their heads and hands. There was no dancing as we see today.”

Ashkar was born in 1955, seven years after the 1948 Palestinian exodus from Israel (the Nakba). Yet he calls everyday items by their traditional names rather than their modern names.

He lives in the old days’ dialect, songs and attire. He wears a white keffiyeh, (head scarf) and a cloak with golden edges.

When he walks on the street and climbs into a taxi, strangers ask him, “What family are you from? What country are you originally from?”

He is still discovering new families that live in the villages that he knows, villages he either forgot about or no one mentioned to him.

Ashkar told Al-Monitor, “Heritage was not created by a particular person but by a group of people. History flows among them, whether they are Bedouin, villagers or city inhabitants. There are many books on Palestinian heritage. But no one reads them or cares about them due to the poverty in the Strip.”

Ashkar said each Palestinian village has its special clothing color and style. But modern clothes, such as jeans, have eradicated the collective memory of folk attire. He added, “Even the old dresses of our mothers and grandmothers have been bought by suspicious parties and sold to Israel, which portrays them as part of its own heritage. Palestinian cultural heritage is more dangerous to Israel than the resistance.”

In his garden, Ashkar laid down a map of his village Berbera and told Al-Monitor, “Here is where the Ashkar family used to live. As you see, it’s all agricultural land. And here is where they used to collect wheat.” Ashkar drew the map based on the memories of the refugees and from the narrative history that he compiled. It seems as if all the villages still live in his heart and that he belongs to those times.