Israel has imposed new conditions that make it even harder, and in many cases impossible, for Palestinian farmers to harvest their olives. 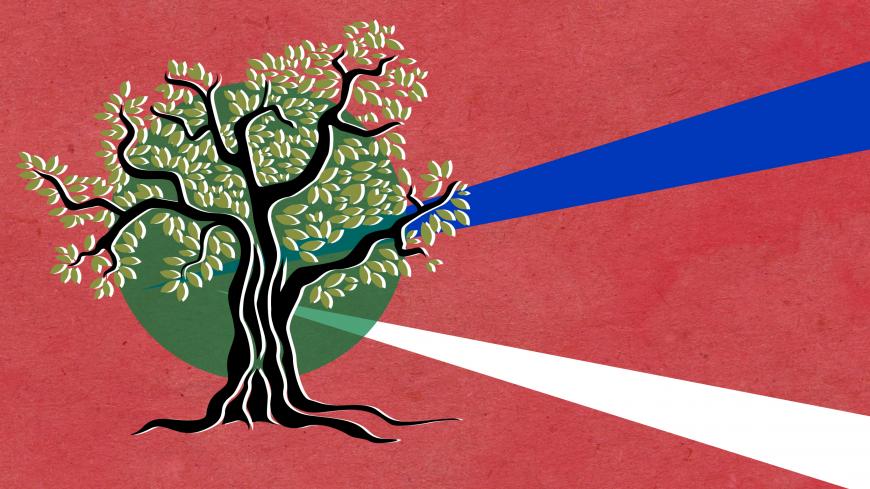 GAZA CITY, Gaza Strip — Dozens of farmers and other residents of West Bank villages rallied Sept. 22 in front of the Israeli gate by the separation wall near Araqah, seeking access to their lands on the Israeli side of the barrier that have been under Israeli sovereignty since the wall was built in 2003.

The protesters came from towns in southwest Jenin province including Araqah, Nazlet Zeid, Tawra and at-Tarem. They demanded unrestricted access to their land and denounced what they called the arbitrary measures Israel enacted Sept. 22 to stop farmers from harvesting their olives. Israel has been denying farmers permits, citing supposed security concerns and saying some parcels are too small to qualify for access.

The new measures come atop other conditions that Israel has imposed for years, such as age restrictions and limited hours of access. Now, any farmer seeking a land-access permit must produce a land title issued in 2018 and a new deed from the Beit Salem camp or, if the owner has died, a deed transfer to determine the heirs’ shares of the land. No permit is issued if the land or share of land is less than 380 square meters (454 square yards). In those cases, Israel seizes the parcels.

Mohammad Waked, a 28-year-old protester from Araqah, told Al-Monitor he and members of his family had applied for a permit to access their land, but were denied for security reasons. He added, "[The Israeli authorities] are justifying it by saying that they are not issuing permits to young people out of fear that they will commit terrorist attacks. My father, however, is 52.”

After the olive harvest, his family grows a second crop of tobacco on its five dunams to make ends meet, though the practice strains the land. Both crops could be ruined because though the area exceeds the minimum size required for a permit, Israel has still denied access, citing security concerns.

“Should they fail to fulfill our demands, we will be forced to step up protests," he said.

Othman Yehya, head of the Araqah municipal council, told Al-Monitor, “It's been hard for us to access our land. The separation barrier and Israeli measures have affected Araqah the most, where lands have been confiscated.”

Israel has issued no permits in Araqah since early this year, and is even requiring permits and deeds from the owners of 300 dunams of private land on the Palestinian side, adjacent to the wall. The Palestinian government has done nothing, he noted.

According to Yehya, the Israeli authorities issued some of the citizens in other nearby towns permits valid for 53 days for harvesting olives and manual plowing, as tractors are banned from entering. Permit restrictions have tightened: Citizens owning less than 5,000 dunams of land are only eligible to obtain one permit per year, while owners of 5,000 dunams (about 1,236 acres) or more can obtain two.

Commenting on whether the town's citizens will bring a case to the Israeli Supreme Court, he said they can't afford to hire a lawyer. He called on the government and civil institutions to provide financial and legal assistance.

Speaking to Al-Monitor, Ayed Marar, director of the legal department at the Colonization and Wall Resistance Commission, said the department only learned about the new Israeli measures Sept. 22 from the Palestinian Civil Liaison office. Marar said requiring owners to attach new title deeds to their applications for land access permits is illegal. Palestinian officials and citizens reject the measure because when the separation wall was constructed, he said, "The Supreme Court of Israel issued a ruling authorizing citizens to have access to and use their land located behind the barrier.”

He believes Israel wants Palestinians to own less and less land as part of its efforts to Judaize and control the land. He called on citizens not to yield and to take the matter to the Supreme Court.

Bakr Eshtayah, a lecturer in economics and social studies at An-Najah National University in Nablus, told Al-Monitor that because so many Palestinians work in the olive industry, it's an essential element to consider in addressing unemployment. Olive products make up half of Palestinian agricultural production, makes the season of great importance for Palestinian farmers. However, it doesn't guarantee Palestinian citizens’ livelihood, he said, particularly given land-access restrictions, economic imbalances and Israeli settlement expansions resulting in less acreage for olive trees.

He noted, "The olive season serves the Palestinian economy, as it makes up 2% of the gross domestic product." He pointed out that the primitive method farmers are forced to use to harvest olives has resulted in some types of oil not meeting international export standards. He called on the Ministry of Agriculture to take action and demanded that the government raise the ministry's budget, which hasn't increased more than 0.1% in the past two years.