Sixty percent of Palestinian lands in the West Bank risk confiscation by Israeli authorities under the absentee property and abandoned lands laws, which some Palestinian activists say were issued with the aim to expand Israeli settlements. 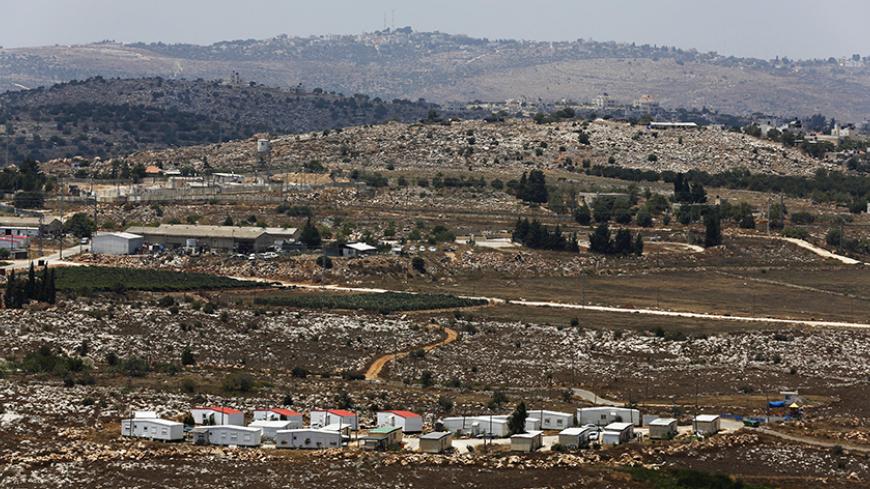 Temporary houses (front) are seen in the West Bank Jewish settlement of Ofra, northeast of Ramallah, West Bank, July 18, 2013. Land near the settlement is part of an appeal against Israeli confiscation of land via "absentee property" laws. - REUTERS/Baz Ratner

RAMALLAH, West Bank — The residents in east Ramallah have been waiting for the Israeli Supreme Court of Justice to issue a decision concerning the appeal submitted by the lawyer of the Israeli human rights organization Yesh Din about a month ago. The appeal argues that the Israeli authorities’ confiscation of Palestinian lands based on the absentee property law is illegal. Fatima Ayyad, who owns 5 dunams (1.2 acres) near the Ofra settlement, east of the city of Ramallah in the central West Bank, is one of those residents.

Ayyad, along with other landowners, started litigations Sept. 22 in a bid to restore the lands and annul the confiscation decision. “This land was a piece of a large lot, which was the property of my grandfather before it was passed on to my father and my uncles. My father passed away and three uncles moved to Jordan. In the 1970s, they lost their [Palestinian] IDs because they had been out of the West Bank for a long time. We have been taking care of and cultivating the land ever since they left,” Ayyad told Al-Monitor.

She said that the Israeli authorities have gradually confiscated the land. Israeli soldiers would occasionally prevent Palestinians from accessing their lands, but in 2014, Israel imposed a complete ban on accessing the plots of land, preventing the owners from harvesting the olive trees and cultivating the land. On Aug. 8, a decision was issued to confiscate the land of the Ayyad family.

Under the pretext of the absentee property law, Israel has confiscated thousands of dunams in the West Bank and Jerusalem. As per the law, which was passed in 1950, the trustee for absentee property, an employee at the Israeli Ministry of Finance, is appointed to take possession and charge of the properties, which are lands and houses owned by Palestinians who fled them in 1948 or those who were displaced from the West Bank in 1967.

Often, these lands and properties become settlements, which is the main reason they are confiscated from Palestinians, such as Ayyad and other Palestinian landowners in the area. In this context, Abu Mustafa Hamad from the town of Silwad, east of Ramallah, told Al-Monitor, “The confiscation [decision] was made to transfer the illegal settlement of Amona [to the Palestinian lands], whereby the evacuation of the settlements will continue up until December.”

Hamad and his family own 12 dunams (3 acres) in the areas to be confiscated. The family used to cultivate the land's vineyards, despite the harassments of the settlers.

“When we were notified of the confiscation decision, we hired a lawyer to start the procedures for the determination of inheritance. We have proved that the owners of the land or their heirs live in the area. Some of them are still alive and others died and were buried here,” he said.

Of note, the confiscation decision includes land around the Ofra settlement and close to the Amona settlement.

While Hamad and other citizens provided proof to the Israeli civil administration in the West Bank that they are not absentees, the Israeli authorities claimed that the lands are being confiscated because they were abandoned.

“We proved that the lands are not absentees’ properties. Yet the Israeli authorities insisted they are abandoned lands and started firing at anyone who approaches the premises to prove otherwise,” Hamad said.

In the same vein, Mohammed Shakir, a field researcher and lawyer at Yesh Din, who is pleading the case brought by one of the citizens in the eastern Ramallah area threatened by confiscation, told Al-Monitor, “Having failed to control the lands under the pretext of the absentee property law, the Israeli authorities are now claiming that they are abandoned lands.”

Shakir believes that the absentee property law and the abandoned lands law are merely a ruse to circumvent laws and confiscate lands for settlers. When there is no legal ground for the absentee property law on some issues in the West Bank, the Israeli authorities are referring to the abandoned lands law in order to control the West Bank’s lands at the expense of their rightful owners.

Shakir also said that the Israeli authorities have been trying to confiscate these lands in favor of Israeli settlers.

The abandoned lands law No. 58 issued by the Israeli authorities in 1967 stipulates that an Israeli trustee would be appointed to take charge of the lands owned by Palestinians who had left their lands before 1967 or after the occupation of the West Bank in 1967, without transferring the ownership for such trustee.

“This law, however, does not apply to the plots of land of Ayyad and Hamad because the law stipulates that in case of an administrator or a guardian of said lands [is present], they are not placed under the charge of the trustee,” Shakir said.

Yet according to Shakir, the Israeli authorities insist on confiscating the lands for political considerations and to please settlers. “There are political reasons behind this decision. Settlers are defying the Israeli court’s ruling and yet they are being rewarded with new land to move to. We have noticed in many legal cases that these laws are being used to circumvent the decisions of the Israeli Supreme Court against settlers and settlements,” he said.

In further evidence of Shakir’s statements, Bassam Karaja, the director of the Jerusalem Legal Aid and Human Rights Center (JLAC), which offers free legal services to Palestinians suffering human rights violations, told Al-Monitor, “We are receiving increasing numbers of cases at the JLAC regarding land confiscation issues in the West Bank, as per the laws of the absentee properties and the abandoned lands.”

He said, “These two laws have been activated as tools to confiscate more lands. The absentee property law and the abandoned lands law are being applied in accordance with the Blue Line procedure [in which a team of experts affiliated with the Israeli civil administration reviews maps in the West Bank] in a bid to control more lands to be used for settlement projects.”

Karaja further noted that these two laws pose a great threat to more than 60% of the West Bank lands, which are lands in Area C. Israel refuses to this day to transfer this area to the Palestinian Authority (PA), contrary to the Oslo Accord that stipulates the transfer of this area’s authority to the PA within a five-year transitional period following the accord’s signing in 1993.

Perhaps the application of these laws is a clear indication of the dire situation in the West Bank and the threat of the dramatic growth in the numbers of settlements, which can be seen as an attempt to resolve the Palestinian-Israeli conflict by imposing a de facto status quo.