Palestinians living in villages near the illegal outpost of Amona are fighting to prove their ownership of the land where a pro-settler campaign is planning to establish its new location. 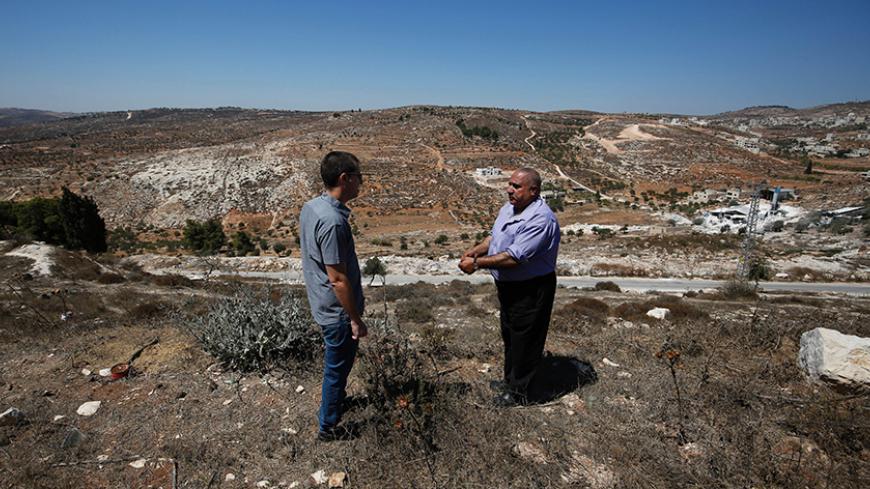 Fuad Maadi (R), a 60-year-old Palestinian man, speaks with Gilad Grossman of Israeli rights group Yesh Din as he stands on a hill in the West Bank Christian village of Taybeh overlooking land he says his family owns and on which houses from the nearby Jewish settlement of Amona might be relocated, Taybeh, West Bank, Sept. 11, 2016. - ABBAS MOMANI/AFP/Getty Images

A stranger landing in Israel and watching the efforts of right-wing Knesset members to prevent the evacuation and demolition of the illegal West Bank settlement outpost of Amona would likely have thought that the security of the State of Israel was at stake.

Although the Supreme Court decided to order the evacuation of the Jewish settlement built on private Palestinian land back in December 2014, the court granted the Amona settlers and the state a two-year extension to organize the move and find an alternative location for its inhabitants. But instead of preparing to implement the ruling, the Amona settlers, their leaders in the Yesha settlement council and the right-wing parties chose to try to skirt the court decision and keep their homes.

One of their moves was the reintroduction of a bill known as the “regularization law,” which failed to pass in 2012. It would prevent the razing of homes built on private Palestinian land by legalizing the settlement. Another is the takeover of lands adjacent to Amona by essentially claiming that these are lands abandoned by "absentee owners." If the owners of such property do turn up, they would receive compensation from the state.

The Amona campaign is currently focused on pushing forward this legislation. As far as the settlers are concerned, this is the ideal solution. On Sept. 17, 25 Likud government ministers, deputy ministers and Knesset members issued a joint declaration of support for the law. Unlike them, the ministers from HaBayit HaYehudi — Justice Minister Ayelet Shaked and its chair, Education Minister Naftali Bennett — do not believe the bill will win Knesset approval and are seeking instead to raze Amona and rebuild it on the adjacent land they argue was abandoned.

In August, the Israeli military’s Civil Administration in the West Bank issued a map marking 35 lots adjacent to Amona and announced that it was attempting to determine whether they could be declared abandoned and Amona could be moved there. But it soon transpired that most of these lands have owners who claim to have been evicted on the day Amona was established in 1995. The Yesh Din human rights organization recently handed the Civil Administration 29 petitions by the legal landowners, residents of the villages of Silwad, Ein Yabroud and Taybeh, opposing such a move.

“Most of the people are heirs of the landowners or [their descendants],” Yesh Din attorney Shlomy Zachary tells Al-Monitor. According to him, representatives of the Civil Administration visited the Silwad village head, handed him a notification and said the residents had 30 days to file objections. The village head, Naal Nimr Hamed, one of the Amona landowners, went to Yesh Din for help.

The organization collected documents from residents of neighboring villages to prove ownership or legal entitlement to the land that the Civil Administration wishes to designate as abandoned. Among the documents are aerial photos of the region that show that most of the land was cultivated until 1997.

“When Amona broke ground, the land owners … were not allowed access,” says Zachary. “Those who tried to get there were chased away by the settlers or the army. Even when the Palestinians tried to coordinate their entry through the Civil Administration, they were told by officials that at the moment there were settlers on the ground and said, 'It’s dangerous for you. Let us deal with it and we will move the [settlers], and you can return to your land and resume cultivation.’”

Zachary says his organization has obtained written documentation pertaining to the conduct of the Civil Administration around the time that Amona was established and the Palestinians were blocked from their lands.

“My father and mother lived next to that land and grew grapes, figs and olives there,” Silwad resident Marwan Hamed tells Al-Monitor. Hamed says his is among the land about to be designated as abandoned. “We continued to till the land until the settlers came. Anyone who went near the settlers would be shot at — both by the settlers and by the army, which would show up immediately to defend them.”

Hamed recounts that two years ago, after the Supreme Court handed down its decision to evacuate Amona, several landowners came to see the area from which they had been barred for almost two decades, but they were forcibly removed. Now they’re hoping that justice will be done through Yesh Din.

Hamed says he has enough documentation to prove ownership of the land. “We have ownership registration going back to the days of the Ottomans, in the name of my father and mother,” he says. “Each of the land owners can identify exactly which lot belongs to his family. We’re talking about a large tract of land, about 2,000 dunams [494 acres]. We live about 1.5 kilometers [1 mile] from there and stare from afar at the land that our fathers worked and from which we were forcibly evicted. Even now, as I’m talking to you, I can see the land and see settlers arriving there in a white car, examining the area and walking about freely.”

Hamed also says that violent clashes between residents of the Palestinian villages and the settlers are a routine matter. “Three years ago, settlers came to me and cut down olive trees. The Israeli army and police came. We gave them photos we had taken, including of those who did what they did, and to this day they haven’t done a thing.”

Zachary believes that Attorney General Avichai Mandelblit will not allow the takeover of the land near Amona now that there’s proof that it was not abandoned. “After we presented the first 24 petitions, a meeting was held in his office and it turned out there were only 11 lots that were not claimed, and they are not contiguous. We presented five additional petitions that will make it hard for the state to establish a settlement on the lands of so-called absentee owners — which in fact are not.”