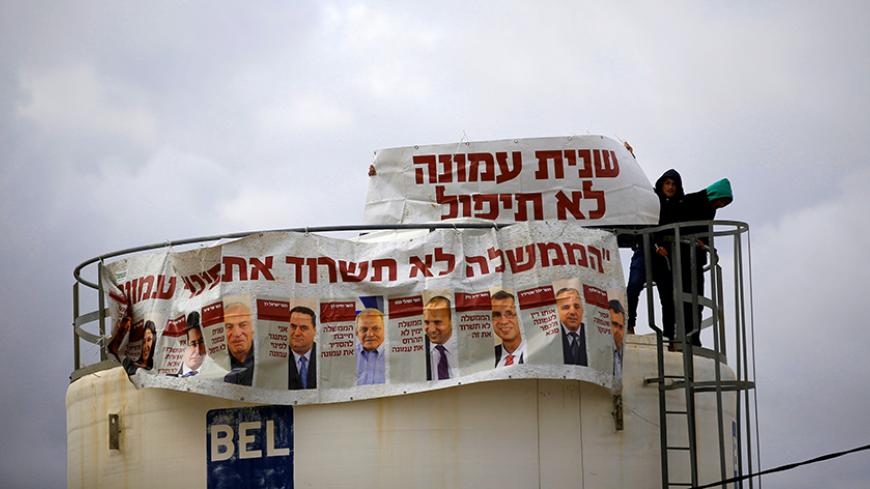 Israeli youths stand on a water tank and attach banners reading "Amona will not fall for the second time" and "The government will not survive the eviction of Amona" in the Jewish settler outpost of Amona, West Bank, Dec. 15, 2016. - REUTERS/Ronen Zvulun

Not even two weeks after the UN Security Council adopted Resolution 2334 demanding an end to all Israeli settlement activity, Israel is already giving the world the finger. Two years ago, Israel's Supreme Court had ordered the evacuation of the West Bank settlement of Amona. But the latest developments in this ongoing saga recall Prime Minister Benjamin Netanyahu's refrain regarding the criminal investigation against him: “Nothing will come" of this because there was nothing there. Now, everyone around him appears to be saying exactly the same thing about Resolution 2334.

According to Resolution 2334, the demographic makeup, character and status of the Palestinian territory occupied by Israel in 1967 and including the ensuing land confiscation constitute a violation of international law. The Security Council expressed “grave concern” that the settlement activities are “dangerously imperiling” the prospects of a two-state solution based on the 1967 borders. It reminded Israel of its commitment, in accordance with the Middle East Quartet’s 2003 Road Map to Peace in the Middle East, to freeze settlement activity and dismantle all settlements established since March 2001.

The evacuation of Amona and the resettlement of its residents will be a first test of Resolution 2334. If the Security Council ignores the dubious deal worked out between the government and the Amona settlers (relocating Amona to a nearby hill), it will affirm that what was going on so far in the West Bank will continue. The state argues that it is the legal custodian of the designated land, which was abandoned by its Palestinian absentee landowners. Attorney General Avichai Mandelblit recently overturned a long-standing policy that had banned the use of absentee landowner property for civilian purposes.

Al-Monitor learned this week that Yesh Din, the human rights organization at the forefront of the campaign to vacate Amona from the private Palestinian lands on which it was built, had located one of these “absentees” in Jordan and had sent a notary public to obtain the power of attorney to transfer his land to a relative living in the West Bank.

Pushing the Palestinians out of their lands in Area C, which is under total Israeli control, is a central element in the Israeli government’s policies. Several of its members make no bones about their desire to Judaize “Judea and Samaria” or at least to annex Area C, which makes up 60% of the West Bank. Knesset members of all the right-wing parties, including the center-right Kulanu and ultrareligious Shas, are already busy these days promoting legislation to annex the settlement town of Ma’ale Adumim, which lies to the east of the 1967 Green Line. But the head of the military’s Central Command, Maj. Gen. Roni Numa, is responsible for the security and well-being of all the residents of Area C, regardless of religion, race and nationality. Yes, he is also responsible for the lands of tens of thousands of Palestinians who are his unwilling subjects.

Numa is not the first commander of the area — nor is he likely to be the last — to align with the settlers and serve their interests at the expense of his Palestinian subjects. Senior defense officials have known for years that the career path taking Central Command heads to the coveted position of military chief-of-staff is smoother with a recommendation from the settlement leadership. The attorneys in the state attorney’s office are also being pushed in that direction by the clear leanings of their bosses — Mandelblit, who authorized the confiscation of the lands of “absentee” landlords, and Justice Minister Ayelet Shaked of the right-wing HaBayit HaYehudi.

Those among them — and there are still quite a few — who wish to preserve the rule of law learned this week what happens to a senior state attorney who tries to stand in the way of the settlers and their political patrons. On Jan. 3, Mandelblit and Shaked decided to clip the wings of Deputy Attorney General Dina Zilber, who dared suggest curtailing the authority of the settlement division of the World Zionist Federation, the long arm of successive Israeli governments in the settlement enterprise.

The settler news site Arutz Sheva reports that Zilber is very unpopular with the Israeli right and religious citizens over her activism. Justice Ministry officials explained to the press that the move was part of the changes being spearheaded by Shaked in the ministry with the intention of “normalizing affairs relating to Judea and Samaria.” Two years ago, Zilber expressed her professional opinion that the norms of clean government are incompatible with transferring authority to an unsupervised nongovernmental body to determine policies and priorities regarding the settlements. She therefore recommended that the state stop its direct funding of the settlement division through the budget and other channels of direct money transfer.

Last October, the government showed legal and law enforcement authorities what happens to those who seek to bring a bit of order to the settlement project. The government voted unanimously to hand over responsibility for the settlement division to Agriculture Minister Uri Ariel, a resident of the settlement of Kfar Adumim and a former leader of the Amana settlement movement in the West Bank. In other words, the ministers threw Zilber’s report into the trash with dozens of past opinions warning the government about funding illegal outposts and turning a blind eye to the invasion of private Palestinian properties.

And finally, some good news. Attorney Shlomy Zachary, who represents Yesh Din and Palestinian residents, told Al-Monitor Jan. 3 about a pleasant surprise in the Supreme Court. At a hearing for a petition against the invasion of private Palestinian lands near the settlement of Beit El, Chief Justice Miriam Na’or made an unusual remark, telling the representatives of the state attorney’s office, “You cannot ignore international law.’’