Why Israeli occupation of the West Bank is reversible 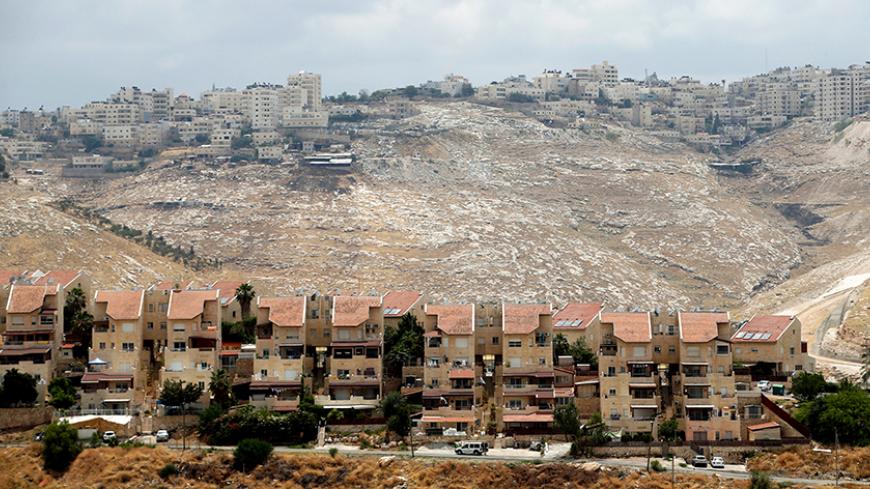 Houses are seen in the West Bank Jewish settlement of Ma'ale Adumim as the Palestinian village of al-Eizariya is seen in the background, May 24, 2016. - REUTERS/Baz Ratner

Ahead of the Jewish New Year, which began Oct. 2, the Central Bureau of Statistics made an announcement that heartened those who oppose the division of the land into two states and to devotees of the settlement enterprise: in 2015 the Judea and Samaria region saw a growth of 4.1% in its Jewish population — from 362,900 in the beginning of the year to 377,900 at its end. This rate of growth is slightly more than double the national average, which stands at exactly 2%.

It seems this is an impressive achievement for the settlement enterprise: Here you have further proof that there's no way back from "Judea and Samaria" (namely the settlement enterprise), and that the two-state solution is obsolete. Could it be that the leader of HaBayit HaYehudi party, Education Minister Naftali Bennett, was right when he said Oct. 6 that the settlement project (or "settlement in the land of Israel," in his words — using the preferred right-wing term for "settlements") is the realization of the will of the people? Is there truth to the education minister's claim that the left, in its call to freeze construction in the territories, distorts the Jewish people's deeply held feelings?

While it seems that the heart of the Israeli people is indeed on the right, at least according to opinion polls, its feet are planted deep on the left side of the map of the land of Israel. The Central Bureau of Statistics' numbers show that there is indeed a way back from the occupation and that the two-state solution is not dead; the settler population in Judea and Samaria is no more than 4.4% of the "Israeli people" (the Jewish population) and only 13% of the population of the West Bank. This is the case after 50 years of efforts to create irreversible facts in the territories, the investment of tens of billions of shekels in infrastructure and incentives, and untold damage to Israel's international stature. What happened to the 1977 promise made by then-Agriculture Minister Ariel Sharon (later prime minister), who was appointed that year as chairman of the ministerial committee for settlement issues, that within a decade a million Jews would live in Judea and Samaria?

Moreover, according to data gathered by Shaul Arieli, which was published in  the daily Haaretz in July, close to 40% of population growth occurred in the two ultra-Orthodox cities, Beitar Illit and Mod'iin Illit. The ultra-Orthodox settlements, which account for a third of the Jewish population in the West Bank, are not an integral part of the religious Zionism (settlement) movement. They chose to live beyond the Green Line, just on the line, since they can't afford an apartment in the ultra-Orthodox city of Bnei Brak or in Jerusalem. On the other hand, only a quarter of the growth in settlement population is attributed to isolated settlements and outposts located outside settlement blocs.

This trend, which has continued for years, is of course familiar to the leadership of the right and the settler leaders. Lacking the capacity to set irreversible facts on the ground by scattering Jews deep within the West Bank, they do so by scattering outposts under every leafy tree and by every dry bush — and these illegal outposts usually comprise of a handful of activists only. The data from the civilian administration that Arieli gathered show that in the last few years about half of new housing units were built outside of the settlement blocs — those that would transfer to Israeli sovereignty in the framework of a permanent solution and an agreement for territorial exchange — at a time that 75% of the growth in the number of Israelis occurred within these blocs.

A comprehensive survey conducted in 2013 by Macro Center for Political Economics in partnership with the Blue White Future organization shows that 28.8% of about 100,000 residents of settlements located outside the settlement blocs would be willing to be evacuated immediately in exchange for financial compensation. This percentage is practically identical to the findings of two previous surveys conducted by the center in previous years. We may surmise that the percentage of those willing to leave would rise, when and if Israel would sign a permanent agreement with the Palestinians, which would end the conflict with the Arab League nations.

And so, the obstacle on the road to the two-state solution can be found with Bennett and his party members, who compete among themselves and with the other right-wing parties for the votes of the settlers. Proximity to public coffers enables them to reward heads of local authorities in Judea and Samaria with generous budgets. And it is the prime minister, of course, who bears the ultimate responsibility for the state budget. On Oct. 9, the government unanimously agreed to transfer authority for the settlements to Minister of Agriculture and Rural Development Uri Ariel, who would delegate that authority to the World Zionist Organization by means of its settlement division. The report on West Bank illegal outposts, presented in 2005 to the government by lawyer Talya Sason, argues that the settlement division operates as the executive branch of those establishing illegal, isolated outposts and stealing Palestinian lands.

In a press release his office published that day, Ariel (also of HaBayit HaYehudi) announced, "We worked hard so that the government would allow the division to return to its full activity throughout the country, including in Judea and Samaria." Ariel, a resident of the settlement Kfar Adumim, added, "Now the time has come that [the division] would return to work for all Israeli citizens, that's what we were elected for and that's why the division was created decades ago." Bennett also praised the government's decision in saying that "the settlement division is the body that enables us to continue Zionism in the year 2016."

This is what the deputy attorney general, Dina Zilber, wrote about this body in an opinion she presented last year: "A backyard, in whose framework vast and significant governmental authorities are activated alongside huge budgets allocated according to internal parameters without effective oversight, in a way that facilitates the development of structural pathologies." Zilber advised the government to stop its direct funding of the division and signed off with this: "Patterns that suited the pre-state era can't continue to exist in their original character in a state that has matured and supposedly seeks to function as a proper state."

If Israel were a proper state, it would not continue to hold a million people under military rule for the entire era of its maturity (50 out of 68 years). A proper state does not cooperate with a small messianic group with narrow interests. Through the false claim that the occupation is irreversible, this small group has dragged an entire state to an abyss and has deceived the whole world.