The current political climate in Israel favors continuation of the settlement enterprise in the West Bank, pushing away any chance of a "two-state solution." 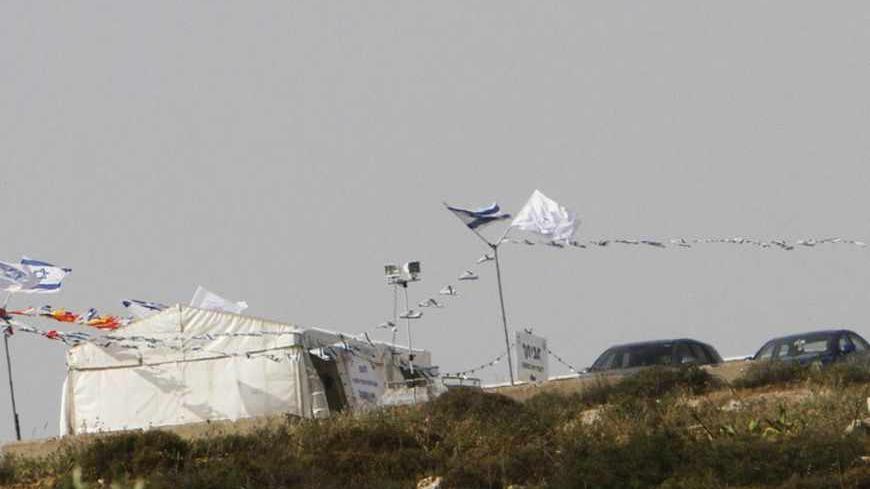 Eviatar, a new makeshift settlement named after Eviatar Borovsky, an Israeli settler killed by Palestinian Salam Zaghal in the occupied West Bank, is seen on a hilltop about a kilometer (six-tenths of a mile) from the fatal attack, near the West Bank city of Nablus, May 2, 2013. - REUTERS/Abed Omar Qusini

"Two-State Solution Bankrupt." That was the very definitive headline of an article I published on this site last week on May 23. I have since received countless phone messages, text messages, and messages on my Facebook page in response to that article. Many were critical of what I had written: “If the mighty cedar has fallen, how shall the hyssop respond?” asked one worried friend. Others were quick to express their reservations about the cogency of my claim and the very fact that it left them with no hope, not even a smidgen. One of those comments that moved me the most came from an ultra-Orthodox friend. I admit, I once assumed that the Palestinian-Israeli conflict would hardly be a priority of someone who lives a life devoted to Torah study. And yet, I immediately adopted one particular sentence that he told me: “I don’t want to raise my children in a place where they tell them that there is no hope, that change is not an option and that we will feed off the sword for all eternity.”

Another friend wrote: “It is so sad that we caused this. … We had better start taking charge of reality, because right now it is taking charge of us.” That was exactly what I intended to say in the article. The reality in the field had taken charge of us and, being left with no choice, no faith and no power of persuasion, we followed after it. We followed out of apathy. The Israeli public came to accept the mantra, “There is no partner on the Palestinian side,” as if it was some divine decree. This was especially true after the second intifada. Israel’s decision-making class led us in that mantra, and it was soon adopted by those people in the media who shape public opinion. There is no one to talk to, and there’s nothing to talk about either.

As it turns out, the other side feels the same way.

This was evident at the beginning of this week (May 26) during the final session of the World Economic Forum in Jordan. Abu Mazen, the chairman of the Palestinian Authority, is a man whose very name is hissed disparagingly by the Israeli right along with the sobriquet, “He is no partner.” At the conference he issued his own last-minute warning, before it gets to be too late: “The continuation of settlement activity and the Judaizing of Jerusalem, the expropriation of lands, arrests and other Israeli activities will eliminate any chance we have to achieve a two-state solution.” Then he added: “The younger generation has begun to lose faith in the idea of two states living side by side, because what they see around them causes them to lose any hope that they have.”

That’s exactly what I meant in the article, when I wrote: “Every clear-sighted individual should tour the settlements in Samaria to see Israel’s enormous investments outside the major settlement blocs, and how hard it would be to imagine the process being reversed.” The reality emerging on both sides is one that would be incredibly difficult, if not impossible, to change. Nor is this limited to firm facts on the ground. It also encompasses the negative atmosphere among the general public. This latter has created a deep rift which may be beyond repair.

Anyone who sees Israel’s enormous investment in Samaria, whether it is in infrastructure, roads or illegal outposts, can only conclude that the reality being created even now makes the feasibility of a two-state solution all the more remote, if not utterly impossible.

This is where I get to the concept of feasibility. It is a concept that peace activists and advocates of various initiatives, such as the Geneva initiative, have been trying to promote. They boldly declare from every imaginable forum that the feasibility of peace exists. In other words, Israel’s settlement enterprise did not eliminate the feasibility of a two-state solution based on the 1967 borders and an exchange of territories. Advocates of this idea bring facts and figures to prove Israeli dominance in the major settlement blocs, but then add that these blocs take up just 6% of the entire territory of the West Bank, whereas the Palestinians dominate the remaining 94% of the territory. The facts speak for themselves. Outside the major settlement blocs, the number of settlers is negligible. There may be thousands of kilometers of bypass roads, but these are the roads not taken, despite the enormous sums invested in paving them.

Advocates of the concept of feasibility say that most of the settlers live in the major settlement blocs of Ariel, Maale Adumim, and the ultra-Orthodox town of Beitar Illit. Even residents of Gush Etzion [south of Jerusalem], they claim, settled across the Green Line because they could find a high quality of living at a ridiculously low cost, especially when compared to the cost of housing within the Green Line. Like most residents of Gush Katif, who were evacuated during Israel’s disengagement from the Gaza Strip in 2005, the settlers in Gush Etzion moved there for economic, not ideological, reasons. Furthermore, advocates of the concept of feasibility have determined, and rightfully so it seems, that the only people who settled in Samaria out of messianic fervor and a zealous belief in the sanctity of the land are the ones living in outposts and settlements along the interior mountain ridge. They total an estimated 50,000 people and, according to supporters of the concept of feasibility, they can be evacuated.

Feasibility advocates claim that once a bold decision is made, evacuating settlers who live outside the major settlement blocs will not be much harder than the evacuation of settlers who lived in Gush Katif. In other words, all that is needed is a political decision to implement the feasible physical partition of the territory once an agreement is reached.

Aye, there’s the rub. Not only is there no one to make that decision. There are people today doing everything in their power to ensure that what is feasible cannot be implemented, not now and certainly not in the foreseeable future. Every bypass road and every outpost that is approved on the ground impinge upon the practicability of the feasible.

Former Prime Minister Ariel Sharon, the father of the settlement enterprise in the West Bank and Gaza, ultimately decided to disengage from Gaza. It makes no difference whatsoever what the reasons were for this decision. All that matters is that Sharon, "the Bulldozer” of Israeli politics, made a political decision that ran counter to his worldview, and in doing so transformed the feasible into the practicable.

In my earlier article I concluded that the current political climate prevents this from happening. In fact, what is happening now is the exact opposite. Everything is being done to determine and ensure a complex, complicated new reality that cannot be altered. Even Finance Minister Yair Lapid, who was recently depicted as the bright new hope of Israeli politics, is of the opinion that when it comes to the idea of two states for two peoples, there is nothing to talk about. The best we can achieve is temporary borders. As evidence of this, the most recent budget, which he signed, did not cut a single shekel out of funding for settlements, legal and illegal alike. The other decision-makers in Israel are very much the same. Not one of them has indicated any willingness to reach a territorial compromise in exchange for peace with the Palestinians. And this trickles down from the political elites to the people. Despite the findings of the poll published on May 27 on this site, I have a feeling that very few of those Israelis, who are so used to hearing that there is no one to trust on the Palestinian side, would be ready to back a prime minister who decides to reach a compromise. They have not been prepared for that. They have gotten used to hearing that “There is no partner,” and that there is no chance of changing a reality that was set, and continues to be set, by the hundreds of thousands of Israelis living in the West Bank.

Is the physical separation of Israel and the Palestinians feasible?

The answer is “Yes.”

Is the feasibility concept applicable in the current Israeli political climate?

That’s not the $64,000 question anymore. In fact, the answer to that is worth billions — at least as many billions as were invested in the territories.