Israel haunted by its mistakes in Gaza

Today, Israelis admit that the disengagement from Gaza was a mistake and wonder how the move could have gone had it been done in cooperation with the Palestinians. 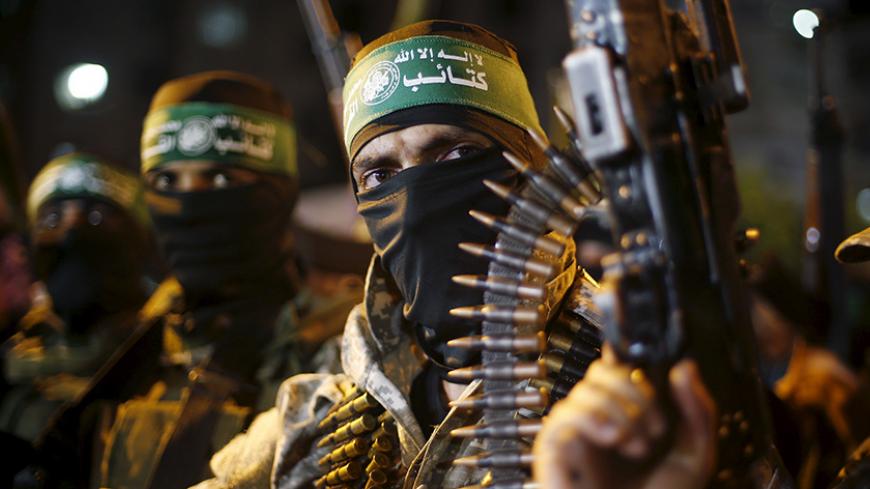 Hamas militants march during an anti-Israel rally in Gaza City, July 8, 2015. July 8th marks the one-year anniversary of the war between Israel and Hamas in Gaza. - REUTERS/Suhaib Salem

July 26 marks the 10th anniversary since Israel's disengagement from the Gaza Strip. The eviction of the settlements in the Gush Katif bloc and central Gaza Strip and the deployment of the Israel Defense Forces (IDF) along the international border are perceived by a majority of Israelis as a historic mistake that turned Gaza into a security threat to Israel, particularly its southern communities. Polls conducted after the withdrawal, before Hamas forcefully seized power in the Gaza Strip and in the years following, have consistently shown that even those who supported the dramatic decision by Prime Minister Ariel Sharon at the time came to believe that they were wrong.

The sense most Israelis feel of having gotten the short end of the stick stems from the unfounded hope that the IDF’s pullout and the eviction of the settlements would quell the Palestinian demands for an end to the occupation and that they would devote their energy to rebuilding their lives in the Gaza Strip. Not only has Gaza become a significant security threat to Israel in the past 10 years, but also, paradoxically, Israel’s military moves to stop the rocket fire into its territory have seriously harmed its foreign relations and international standing.

It’s best to start by discussing the security situation of the Jewish settlements in Gaza on the eve of the disengagement. Until the evacuation, the settlements of Gush Katif were subjected to daily terror attacks. Nearly 6,000 mortar shells were fired during the second intifada (2000-2004) from the nearby Gaza town of Khan Yunis at the communities, which increasingly turned into fortresses. The roads leading from the area of Kissufim to Gush Katif were designated targets for the Palestinian organizations in the Gaza Strip. The Israeli defense establishment and political leadership, chief among them Sharon, knew full well that the security and safety of the residents of Gush Katif and central Gaza could not be sustained for long.

But the disengagement that Sharon announced at the Herzliya Conference in December 2003 did not come about to stop the security deterioration in Gaza, nor did it stem from concern for the well-being of the Jewish residents there. Sharon, who coined the slogan "Netzarim [a Gaza settlement] and Tel Aviv are one and the same,” came up with the disengagement plan in a bid to stop another one: US President George W. Bush’s 2003 Road Map for Peace in the Middle East. Israel’s working assumption was that if it initiated a broad and significant diplomatic move, it would be able to throw a spanner in the American plan, which called for an Israeli withdrawal from the Gaza Strip and West Bank and the establishment of a Palestinian state along the 1967 borders. Attorney Dov Weisglass, Sharon’s Cabinet chief, even admitted in an interview with Haaretz on Oct. 5, 2004, that that had been the central reason for the dramatic plan devised by Sharon, who is viewed as the founding father of the settlements. His objective was to sacrifice the communities in the Gaza Strip to protect the ones in Judea and Samaria. Yet he failed to foresee the day after.

When the disengagement started to materialize and everyone realized that Sharon meant business, the Palestinians tried to persuade the Israeli political establishment to carry out the withdrawal from Gaza in cooperation with the Palestinian Authority (PA). Mohammed Dahlan, then security adviser to President Mahmoud Abbas and later his sworn enemy, tried to explain to Defense Minister Binyamin (Fouad) Ben Eliezer and Shin Bet Director Avi Dichter that cooperating with the PA and presenting the disengagement as a joint diplomatic move would help Israel in the future while securing control of the Palestinian Preventive Security Force over the area to be evicted. But Sharon would not hear of it. He called Abbas a lame duck and saw the PA’s senior members in a similarly negative light.

Hamas appropriated Israel’s disengagement, won the elections in 2006, took over Gaza and forcibly ousted Fatah. The doomsday prophecies came true. Gaza turned into "Hamastan," just as the detractors of the disengagement warned.

But these were not all of Israel’s mistakes. When Hamas won the elections, Prime Minister Ehud Olmert announced economic sanctions on the PA, further weakening its Preventive Security Force and its ability to counterweight Hamas’ increasing power. After the coup that was staged by members of Hamas' military wing, Izz ad-Din al-Qassam Brigades, and the seizure of PA institutions by Hamas in 2007, Olmert declared a general crippling blockade on Gaza — one that has been in effect for the last eight years. Ever since, Hamas has been channeling its strength and energy into lifting the blockade and preserving its rule.

Reality shows that Hamas became the leading political and military force in Gaza society just months after the disengagement. But because the Israeli public feels that the disengagement has been calamitous for the country’s southern residents and has increased the security threat, these questions need to be asked: If the disengagement had been implemented as a diplomatic move coordinated with the PA, would Hamas have appropriated the “banishment of the Zionist enemy from Gaza?” Could Israel have even continued to hold on to the settlements in Gush Katif, Kfar Darom village and the northern part of the Gaza Strip and defended their residents? Is the rocket fire from Gaza the result of the blockade? Does it stem from Hamas' attempts to pressure Israel into lifting it?

These questions will remain hypothetical. Yet when marking the 10th anniversary of the disengagement, they should be asked. A few days before the IDF pulled its troops out of the Gaza Strip, this writer traveled to the Netzarim settlement in the center of Gaza with Ihab al-Ashkar, a former Fatah militant who served as the supreme commander of the first intifada in Gaza.

“Now, as you’re leaving Gaza, there are two choices,” he said. “If you do it wisely, Gaza will thrive and become a Garden of Eden. People will work and think only of the future. If you leave, lock us up and throw away the key, Gaza will turn into one big jungle and you will suffer.”