Israel's disengagement from Gaza should not be perceived as a disaster but as a first step amid many more that guarantee Israel's Jewish majority. 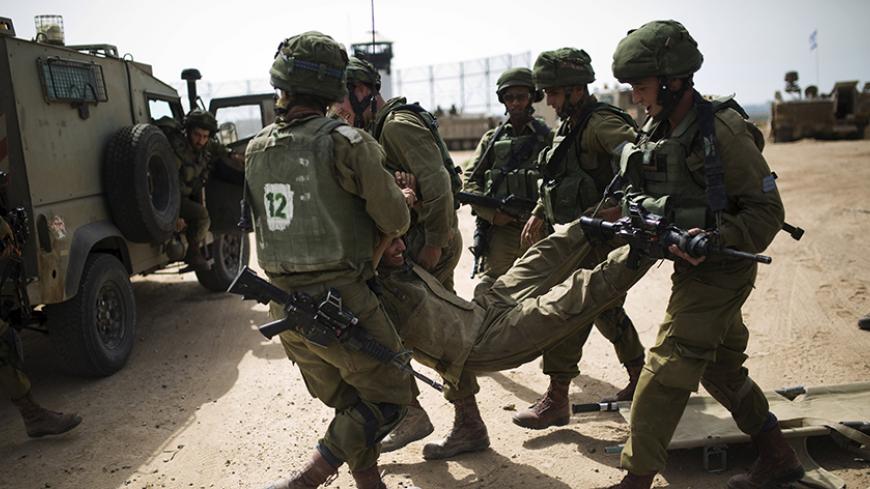 “Unfortunately, this place was given to our enemies without any real reason. This center [Gush Katif Commemoration Center] reminds us of what we gave up, and why it must never happen again. I call on everyone to come and visit here to understand what a great calamity it was, and how we are obligated to prevent such a calamity from happening again.”

These words were uttered by new Likud Knesset member Miki Zohar after he visited the Gush Katif Commemoration Center in Nitzan on June 7. Gush Katif is a former Gaza Strip settlement bloc. Zohar's visit was part of a series of events marking a decade since the evacuation of the Gaza Strip and northern Samaria as part of the 2005 disengagement plan. Yinon Magal and Bezalel Smotritz, two Knesset members from the HaBayit HaYehudi Party, visited the site before Zohar.

In the coming days and weeks, as we approach Aug. 15 ­— the 10th anniversary of the beginning of the evacuation — we will hear more and more allegations along the lines of Zohar’s statement: empty cliches taken from the narrative cultivated by the right in the last decade, according to which the disengagement from Gaza was a catastrophe that led to the rise of Hamas and brought about the rocket terror. The renewed rocket fire from Gaza last weekend toward the localities in the south, almost a year after the Protective Edge campaign in the Gaza Strip, provided fresh ammunition for right-wing mudslinging against the disengagement plan.

Right-wing spokespeople, including senior politicians headed by Prime Minister Benjamin Netanyahu, have succeeded over the years in transforming the disengagement plan (of late Prime Minister and Likud Chairman Ariel Sharon) into a symbol of diplomatic blindness, diplomatic and security irresponsibility and a road sign warning against similar steps in the future. The right-wing position, which holds that every time Israel retreats from territories they then become hotbeds of terror, has taken root in the public consciousness. On the other hand, the arguments of the supporters of the disengagement have paled over the years as the rounds of fighting in Gaza became more frequent and the range of the rockets increased to the extent that they briefly shut down Ben Gurion Airport last summer. The center-left attempt to present the disengagement plan as a brave diplomatic initiative that bore fruit for Israel failed.

As absurd as it sounds, this much maligned plan was not initiated by the left but was the invention of settlement builder Ariel Sharon, while he served as a Likud prime minister. The Labor Party — today's Zionist Camp, then headed by former President Shimon Peres — provided a safety net in the Knesset to the plan and later on joined the government.

Ultimately, the disengagement split the Likud. The evacuation of Gush Katif was a constitutive diplomatic act that created a political center. But today’s political center, led by Yesh Atid Chairman Yair Lapid, is in no rush to politically “appropriate” such a maligned plan. The disengagement is viewed with such disfavor these days that even on the day Sharon passed away, Jan. 11, 2014, it was referred to as a catastrophe by senior members of the political system. HaBayit HaYehudi Chairman Naftali Bennett penned the following announcement that was publicized just after Sharon died: “In the end of his days [Sharon] initiated and carried out the 'disengagement' plan — the destruction of Gush Katif and the expulsion of 8,000 of its residents.”

On July 15, 2015, on the ninth anniversary of the disengagement (a bit before the end of the Protective Edge campaign), the Knesset’s Foreign Affairs and Defense Committee held a meeting. Knesset member Yariv Levin, now tourism minister, uttered the following statements: “Ultimately, the facts are simple: From every place that Israel withdrew from, radical Islamic elements entered. The disengagement is a black stain on Israeli history. And the way the decisions were made is a disgrace to the democratic process.” The discussion was conducted at the initiative of Knesset member Ze’ev Elkin, now absorption minister and member of the security-diplomacy cabinet. The entire discussion was one-sided; most of the experts and spokespeople invited presented the disengagement as a huge error over which Israel is forced to pay for every single day.

But precisely in these very days, when the Israeli public is exposed to the significance and the repercussions of the growing diplomatic pressures on Israel, center-left spokespeople can present the advantages of the diplomatic initiative — if not to improve Israel’s strategic circumstances in the region, then at least to stop the global delegitimization process that is likely to harm its diplomatic robustness.

The disengagement was, in effect, the last diplomatic move carried out by Israel in the past decade. There were peace initiatives and plans later on, but no prime minister after Sharon actualized such a dramatic operation. The criticism of the left on Sharon stemmed from the fact that the evacuation did not involve an agreement with the Palestinians, but the plan itself was, generally, warmly adopted.

As opposed to the arguments of the right, who claim that Hamas began to fire on the localities in the south due to the disengagement, the truth is that the first Qassam rocket was fired in 2001 from Gaza toward the southern town of Sderot. By the eve of the disengagement, hundreds of Qassam rockets had been fired. The public has also forgotten the almost daily blood-price that Israel paid for in soldiers, who were wounded and killed by demolition charges on an almost daily basis. And the unreasonable burden of protecting 8,600 residents who lived in the Gaza Strip has also been forgotten.

One of the reasons that Sharon conceived and initiated the disengagement plan was because he understood that the diplomatic stalemate lent itself to initiatives that he felt would harm Israel’s global stature, such as the Geneva Initiative. He wanted to remove Israel’s responsibility for over a million Palestinian residents in the Strip, and he felt that would benefit Israel and reduce some of the international pressure. Sharon’s operation was an expression of taking the initiative and assuming responsibility, and it gave Israel tremendous diplomatic (and economic) credit that it needed desperately after the years of violence of the second intifada from 2000 to 2005.

In the evacuation from Gaza and Northern Samaria, Sharon laid the diplomatic foundations of Israel’s political center; this involves readiness for compromise alongside great doubt and distrust regarding the intentions of the other side. In addition, despite all the slander against the whole operation, even now when a right-wing government rules in Israel, there are no intentions of trying to turn back the clock. On the contrary. In the Protective Edge campaign from July-August 2014, Netanyahu and Defense Minister Moshe (Bogie) Ya’alon did everything they could to avoid a ground offensive in Gaza and conquering sections of the Strip.

Precisely now, when the two-state solution is endangered and the binational state concept gathers momentum in the political discourse, the disengagement plan should serve as an example of an operation in which the State of Israel washed its hands from ruling over a Palestinian population — an operation that was supposed to have a Part B.

Leader of the Zionist Camp Isaac Herzog did an excellent job describing the implications of continued diplomatic stagnation in his June 7 speech at the Herzliya Convention. “In about a decade, the Arabs between the Jordan and the Mediterranean will be a majority: 52% Arabs and 48% Jews," he said. "A Jewish minority in the land of Israel. The Jewish national home will become the Palestinian national home. … I want to maintain a Jewish state with a Jewish majority.” Perhaps this demographic threat on one hand and the 10th anniversary of the disengagement on the other will remind the center-left to accord the disengagement the credit it is due, and view it as a legacy of responsible action to ensure the future of the Jewish nation. If the center-left camp will bow its head in the face of criticism over the evacuation of settlements, this will be viewed as another defeat to the ideological right.