For the Israeli right, the 2005 Gaza disengagement became an ideological and a strategic turning point, which will make it difficult for any Israeli leader to champion a similar move in the West Bank. 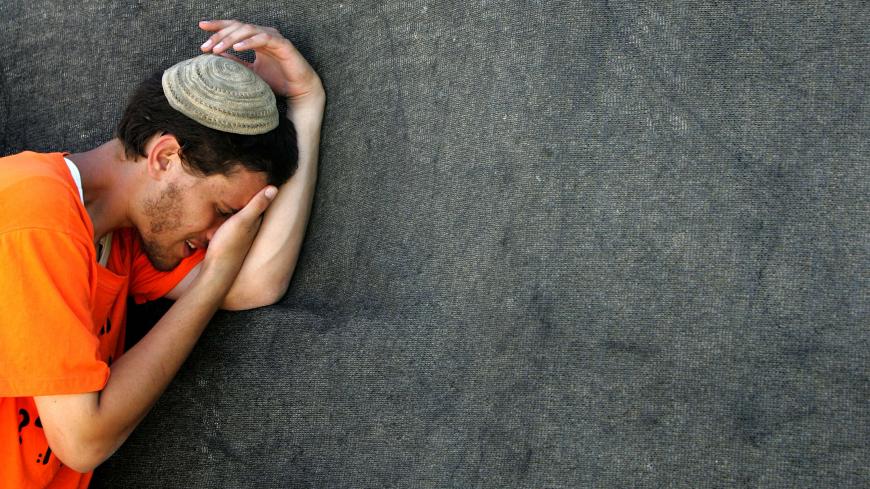 An opponent of Israel's disengagement from Gaza prays before evacuation by police on the roof of a synagogue in the Jewish Gaza Strip settlement of Kfar Darom, Aug. 18, 2005. - REUTERS/Nir Elias

It was a hot, humid August in 2005, when an event that would prove integral to Israel’s future demonstrated to politicians, statesmen, military brass and run-of-the mill Israelis how painful and difficult it is to separate from the Palestinians when it comes to evacuating Israeli settlements. That month the government evacuated the 21 Gush Katif settlements in its unilateral disengagement from Gaza (along with four settlements in the northern West Bank). The images are still etched in the collective Israeli memory, among them scenes of angry protesters in orange shirts brandishing placards blaring, “Jews don’t evacuate Jews!” There was crying, screaming and then the suddenly silent rubble and ruins of private homes, public buildings and synagogues.

Just a few months after the disengagement, in January 2006, Hamas won the elections for the Palestinian Legislative Council. Then, five months on, in June, an Israeli soldier, Gilad Shalit, was abducted near the Gaza border. About a year later, Hamas launched military action to seize full control of the government. Since then, Israel has been trapped in an endless cycle of violence and missile fire into its territory from Gaza. Despite speculation by some observers, the engagement did not turn Gaza into another Singapore or a new Dubai.

Mordechai Beter is director of the Katif Center: Gush Katif and Northern Samaria Commemoration Center, founded in 2008 in southern Israel after the Knesset passed a law for the establishment of a research institute focusing on the evacuated settlements. The center includes an archive with thousands of artifacts pertaining to the history of Gush Katif and the disengagement.

“It may be because of the security situation, but this year we are receiving more visitors from across the country, and not just from religious Zionist circles,” Beter told Al-Monitor. “There are even high school groups, as well as groups of adults, who were unaware of what was happening at the time.”

Beter, who lived for 26 years in Gush Katif, first in Netzarim and then in Neve Dekalim, remembers the terrorist attacks that Gush Katif residents regularly endured, but says that he never once believed that Israel would abandon the area because of the security situation.

“I believe that it will be much harder for the government to do something similar in the West Bank today, because everyone has seen the consequences of the disengagement from Gaza,” Beter said, lamenting the lack of quiet and security. “We left. We even evacuated settlements, but we got nothing in return.”

Memories of the disengagement are particularly compelling among religious Zionists. The “Katif Conference for National Responsibility” has taken place in Yad Binyamin for the past five years. Every year for the past 14 years, young people from Gush Katif have held a basketball tournament in memory of Itai Yules. The leaders of the religious Zionist movement make a point of promising their voters that they will not allow what they view as “the horrors” of the disengagement to be repeated, even though an Israeli withdrawal from the West Bank, either unilaterally or as part of an agreement, isn’t even on the table. There are some calling publicly for Israel to return to the settlements in the northern West Bank and northern Gaza in response to rocket fire from Gaza.

Tamar Hermann, a senior associate and academic director of the Guttmann Center for Public Opinion and Policy Research, told Al-Monitor that religious Zionists consider the disengagement to have been a watershed moment.

“There is an understanding among the religious public that when the state wants to suppress a protest, it can, no matter how many people participate,” Hermann said. “There has been a decline in the belief that mass protests can prevent something, once the state has decided to carry it out. Then there is this powerful belief that the state betrayed its citizens, and that it proved to them that it is undemocratic. They actually have a hard time with the democratic component of this whole issue.”

The argument over what lessons can be learned from the disengagement is not limited to the religious sector. Politicians on the right and the left have differing and sometimes opposing interpretations of the disengagement, based on the security premises specific to their political affiliation.

Knesset member Miki Zohar of Likud speaks of the disengagement as a national trauma with a lesson that must be heeded. “The trauma of the disengagement, with entire towns evacuated, resulted in a significant change in perspective among many sectors,” he said in a conversation with Al-Monitor. “The same is true of the results of the disengagement. The magnitude of the disappointment was commensurate with the enormousness of the hope. From a security perspective, the situation deteriorated sharply.”

Zohar believes that if the settlements still existed in Gush Katif, the security situation in the area adjacent to Gaza would be exponentially better than it is today. At the same time, however, he is in no “rush” to rebuild the evacuated settlements. “No one wants to go back there,” he said. “That is why the prime minister is in no hurry to send troops in and start ground operations. It is quite possible that sometime in the future we will find that we have no alternative, but it is still true today that no one is in a hurry to go back.”

A former senior member of the Likud who fought tooth and nail against disengagement supports this point of view. In a conversation with Al-Monitor, he expressed reservations about comparing the withdrawal from the Sinai Peninsula as part of the 1978 Camp David Accords between Israel and Egypt with a withdrawal from Palestinian territories.

“If we withdraw from the West Bank, the territory will fill with an Iranian presence, and Hamas will come to power as soon as we leave,” he said, speaking on the condition of anonymity. “That is why [Palestinian President] Mahmoud Abbas continues to coordinate with us on security.”

On the other side of the political spectrum, Tamar Zandberg, Knesset member and former Meretz chair, claims that the security situation since the disengagement has actually improved. “There can be no argument that there are fewer Israeli casualties today,” Zandberg said. “The disengagement improved Israel’s situation vis-a-vis Gaza. When it comes to anything about the West Bank, however, it is much harder, if not impossible, to take unilateral measures. At the time, Meretz supported an agreed-upon exit from Gaza. Even if we were critical of the unilateral nature of the withdrawal, the situation has improved nonetheless. It is important to point that out.”

The group Commanders for Israel’s Security is not afraid to talk about another disengagement from the Palestinians, claiming that it will become a necessity. Their campaign “We’re divorcing the Palestinians” has evoked sharp responses from critics of another disengagement, led by Maj. Gen. (ret.) Gershon HaCohen, now a research fellow at the Begin Sadat Center for Strategic Studies. He called it “dangerous manipulation.”

In contrast, a position paper by Maj. Gen. (ret.) Amos Yadlin, head of the Institute for National Security Studies, and the attorney Gilead Sher, head of the institute’s Center for Applied Negotiations, states, “In hindsight, it can be determined that the [Ariel] Sharon government made the correct strategic decision, when it chose to disengage. This decision was made against the backdrop of the intifada, an ongoing series of deadly terrorist attacks, and deep disagreements within Israeli society over the solution to the Palestinian-Israeli conflict. Nevertheless, the manner in which the decision was implemented had serious failings.”

Israelis continue to disagree about the Gaza disengagement and its lessons, just as they disagree about every serious issue. Should the possibility of disengagement from the West Bank be raised, whether done unilaterally or as part of an agreement, politicians, researchers and senior military officials will rely on the events of 2005 when offering their assessment. Since “withdrawal for peace and economic prosperity” didn’t work in the case of Gaza, it will be harder for politicians to explain the reasoning behind another disengagement to the Israeli public.