Zvulun Kalfa, a new Knesset Member from the Yehudi party list, vows to undermine the peace efforts of US Secretary of State John Kerry. 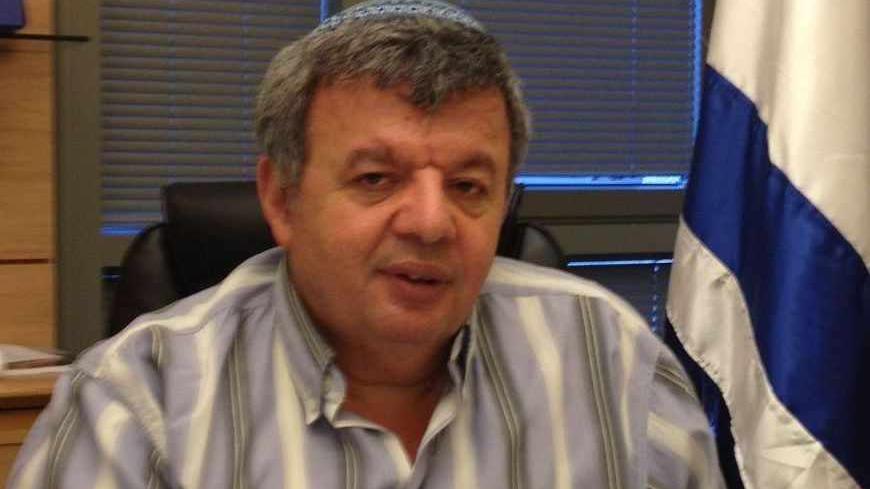 Knesset member Zvulun Kalfa of the Habayit HaYehudi party, seen here in his legislative office, says the historic right of the state of Israel is for it to stretch from the Jordan River to the Mediterranean Sea. -

“I pray that [US Secretary of State] John Kerry doesn’t succeed, and I will do everything I can to cause him to fail,” comes the plain answer from Zvulun Kalfa, a new Knesset Member who holds the seventh spot on the HaBayit HaYehudi party list, when asked in an interview for Al-Monitor about the secretary of state’s recent visit to the region. Kalfa is still trying to deal with the trauma of being evicted from his home in the settlement of Amona during the implementation of the 2006 Disengagement Plan. He considers his term in the Knesset “a mission to prevent the next expulsion.”

An alumnus of the Hesder program (which combines army service with religious studies), Kalfa belongs to the extreme wing of his party, together with Knesset Members Orit Strock and Yoni Chetboun. Like them, Kalfa believes that the state of Israel should stretch from the Jordan River to the Mediterranean Sea, claiming, “It is our historic right.” Last Tuesday, July 2, the Knesset marked eight years since the disengagement from the Gaza Strip and Northern Samaria. Knesset member Kalfa delivered an emotional speech to the forum, declaring, “We shall return!”

Al-Monitor:  You are a member of the coalition in which the prime minister is trying to advance a two-state solution, at least in his public declarations. Aren’t you worried that Economy and Trade Minister Naftali Bennett, the head of your party, will eventually be part of such a process?

Kalfa:  Not for a moment. I trust him completely on this issue. We’ve known each other for a very long time now. He is a lot more extreme than people think. It’s something very deep inside him. The fact that people are talking about a process doesn’t bother us. People have been talking about it for twenty years already.

Al-Monitor:  What about Prime Minister Benjamin Netanyahu? After all, he did declare that he supports a two-state solution. What would happen if he takes steps to advance that idea?

Kalfa:  It’s time to tear the mask off the mantra of the two-state solution. Netanyahu said that in his Bar Ilan speech, in response to the Cairo speech [by President Barack Obama]. So much has happened since then. The whole world is in turmoil, and we are left with the same worn adage of a two-state solution. Does anyone in this region even believe anyone else here? Everyone is lying to everybody else. We are the only people who follow European codes of behavior. But this is the Middle East, and the reality here is totally different. If we say unapologetically that this is our land and that we returned here after two thousand years of exile, we will be respected.

We must say as clearly as possible: This is our country, period. We are sustained by an ancient heritage — not by Tel Aviv, not by the towns of Gedera and Hadera, but by Jerusalem, Shechem [Nablus] and Hebron. The roots of Jewish history lie there. We should respect those roots instead of denying them. Our legitimacy will come from that.

Al-Monitor:  In the film "The Gatekeepers," three former heads of the Shin Bet support the two-state solution as the only way to ensure our future as a Zionist and democratic state. Doesn’t that give you reason to think that maybe you’re missing something?

Kalfa:  No, since it is all clear to me. My starting point is that this is our land. That is the answer to the demographic and security threats. We have returned to the land of our forefathers. My sons served in combat units in the army. We won’t get cold feet. What I would suggest is that everyone read the reports that those security experts wrote before the disengagement, describing how good it would be here afterward, and how it would add to Israel’s legitimacy in the world. I stopped believing experts long ago. We returned here after two thousand years, so even if there are difficulties along the way, my starting point remains the same: This land is ours.

Al-Monitor:  What, then, if not the vision of the two-state solution?

Kalfa:  A single Jewish state stretching from the Jordan River to the Mediterranean Sea. There is no such thing as the Palestinian people. They are Arabs. The idea of a Palestinian people is one of the biggest lies there is. They simply took the name of the ancient Philistines, and we got caught in the trap. They have no connection to this place. They never had a political/national/sovereign entity here. This country was neglected, abandoned before we got here. Why didn’t they do anything then?

Al-Monitor:  What do you think about Knesset member Tamar Zandberg of the Meretz party, who said in an interview with Al-Monitor that she boycotts goods produced in the settlements, claiming it is a moral act?

Kalfa:  With all due respect to the boycott of goods, what I want to know is: What positive steps have those people supporting the boycott done to advance the Negev region in the south, or the northern region, for example? It has nothing to do with the settlements. Some people are all talk.

Al-Monitor:  You were very emotional in your speech last week marking eight years since the disengagement. Doesn't time help to heal the pain of being evacuated from your home?

Kalfa:  No, when I was a student at the Hesder army-rabbinical college in Yamit [in Sinai], the city was evacuated — and I underwent a formative experience. I learned to look at life from a much broader perspective, and not just from the perspective of that particular moment. Later, when I lived in Gush Katif [in the Gaza Strip], people would say to me, "How can you live here? We wouldn’t stay here for a minute under the current conditions." I told them that there were entire families of pioneers buried in the central city of Rishon LeZion cemetery, and that when someone believes that he is part of a larger vision, he gains the strength to persevere. Gush Katif was a wonderful place to live. It flourished socially, economically and in terms of its Torah culture.

With his well-formulated ideological and religious worldview, one can only imagine what would happen within the HaBayit HaYehudi party and the coalition if a significant diplomatic process develops with the Palestinians. Based on what Zvulun Kalfa says, Netanyahu will have to form a new coalition to sign an agreement with Palestinian Chairman Mahmoud Abbas.