In an interview with Al-Monitor, Knesset member Moti Yogev attacks US Secretary of State John Kerry for his role as mediator and warns President Shimon Peres is "delusional" for preaching in favor of a Palestinian state. 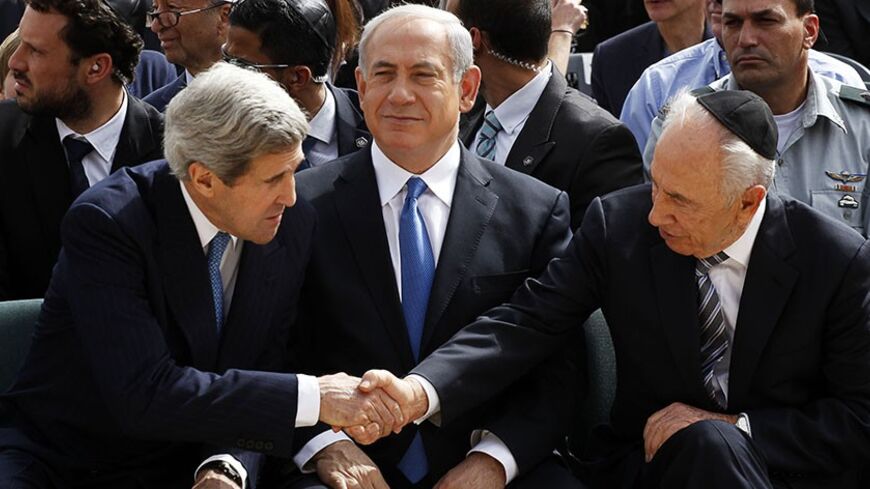 In the last elections, when the Likud Party started losing seats to HaBayit HaYehudi, headed by Naftali Bennett, Prime Minister Benjamin Netanyahu’s people began a focused campaign to halt the trend. What they planned to do was to expose the real face of the extreme right-wing party, perceived by a significant chunk of the public as a fresh young movement with a tech-savvy leader, drawing voters from the “soft right” and center.

The campaign featured the most extreme faces of the party such as Orit Strock, one of the leaders of the Jewish settlement in Hebron. In response, Bennett highlighted names that appealed to the consensus, like former Israel Defense Forces officers Yoni Chetboun and Mordhay “Moti” Yogev, a former brigade commander in the Judea and Samaria Division and an educator who focused intensively on social and economic issues.

When it came time for Israeli citizens to go to the voting booths, it became apparent that Netanyahu’s efforts had failed. Bennett was one of the success stories of the elections, carried by the wave of social protest. He befriended Yair Lapid, chairman of Yesh Atid, and joined forces with him all the way to the Netanyahu government. Today, HaBayit HaYehudi is one of the most rigidly ideological parties in the history of the Knesset, so much so that within it, Bennett is considered a moderate. To better understand the mood of the party in which he operates, it's necessary to hear what his Knesset members have to say.

The interview with Knesset member Moti Yogev, a resident of the settlement of Dolev in the Benjamin Regional Council, took place on the afternoon of Jan. 29, just a few hours before Bennett apologized for attacking Netanyahu. It provides a better understanding of how HaBayit HaYehudi regards its role in the government. From his perspective, the members of the party are Netanyahu’s watchdogs facing the Americans, whose policy Yogev describes as "anti-Semitic." According to him, President Shimon Peres “has entered the delusional stage” and should step down. Their need to protect Netanyahu is what prevents them from quitting his coalition easily.

The text of the interview:

Al-Monitor:  If Bennett, the chairman of your party, thinks that Netanyahu’s policy is a moral failure, why does he continue to be part of his government?

Yogev:  You have more influence from within the coalition. It seems to me that what the prime minister and Naftali Bennett have in common, putting aside any negative residue, is much greater than what sets them apart. That is why it is our duty to make every effort we can to ensure that the arrangements reached are not the arrangements made by Kerry and the Americans, and that maybe there won't be any arrangements. What Bennett said about the prime minister wasn’t personal. I am the kind of person who doesn’t try to educate the prime minister or the head of my own party, but the very idea of leaving Jews under Palestinian rule is insane and unrealistic.

Al-Monitor:  As far as you are concerned, is Netanyahu the right person for the job of protecting the land?

Yogev:  Netanyahu is the prime minister, and I think that he is standing up to American pressure. He even said so explicitly, saying that if a document is submitted, it only obligates the Americans.

Al-Monitor:  You’re a member of the Knesset’s Foreign Affairs and Defense Committee with a military past and an understanding of military affairs at the highest levels. You encounter professionals who think differently. Doesn’t that raise any doubts that maybe you are wrong?

Yogev: Throughout my entire military service, up until I was chief of staff of the Gaza Division and commander of a brigade in Judea and Samaria, and especially at the National Defense College, my horizons were broadened. I always ask what the objective is and remain focused. I feel that I bring a lot of knowledge to the table, as well as an ability to assess things.

Knesset member Moti Yogev poses in a promotional picture provided by his office in 2013.

If I can call the child by its name, the directions that the Americans are trying to pressure us into taking is a case of pure anti-Semitism. I have no doubt about it. They are obsessive in the pressure they are putting to establish a Palestinian state, and I don’t call that "messianic." I leave the messianism to good people. We should thank the United States for its military aid, and therefore their pressure definitely goes both ways. I am not one of those who thinks that we should break the relationship between them.

As far as I am concerned, a Palestinian state contradicts our beliefs. That’s the first thing. Ideology is certainly a leading factor, and security considerations rest upon it. We did not come back here to evacuate settlements or to be ruled by foreigners, and especially not by murderers. Furthermore, there are also security considerations. American sensors and all kinds of other arrangements will not protect us from a [Palestinian] Authority that teaches its children to murder and annihilate Jews.

Al-Monitor:  You have no doubts about that?

Yogev:  Yesterday [Jan. 29], we returned from Auschwitz with a delegation of Knesset members. There is a parallel that people find hard to accept, but it is the most realistic parallel. In the past it was the Nazis, joined by [Haj Amin al-Husseini, mufti of Jerusalem during the British Mandate]. Today, the Palestinian Authority is joined by the Iranians in that, in effect. Its entire educational system teaches that the Jewish people must be destroyed.

There are hard disks with this content that I was shown by Brig. Gen. Yossi Kuperwasser, chief of staff of the Ministry of Strategic Affairs. The children quote Hitler, raise their arms in the Nazi salute and call for the destruction of Israel. The martyrs are their heroes. Can you imagine them ruling over us? They are taught to destroy us much more than the previous generation was. Official leadership. Official education.

I can’t dismiss serious people. We also want a Jewish and democratic state here. Today, for instance, I asked for a debate about the real demographic figures for Judea and Samaria, to know what the real numbers are. Even serious demographers like Arnon Soffer believe that the relative demographic situation of Jews in the space between the Jordan River and the sea will improve in favor of the Jewish population over the coming years.

Al-Monitor:  So they are manipulating us with the numbers?

Yogev:  No. I am trying to be realistic when facing people who are scaring us, including the president of Israel, whom I respect. But the next time I see him in front of me, I will make a public announcement that if he continues to lead in diplomacy and politics, then he should finish his job already and become a politician with influence instead. As president, he should unite the people. After hearing him present the people of Israel with a one-sided position for the third time last week, it would have been appropriate for him to resign his position and search for other platforms from which to say what he thinks.

He said the most delusional thing at a gathering to mark the 50th anniversary of the National Defense College: A Palestinian state should be established here within a year, and then you will see how the world will be a much better place. Things will be great here.

This is delusional. Peres is someone who gave a lot to the State of Israel, but in my opinion, he is now in the delusional stage, and this is putting the country at risk. It is a dangerous stage, and someone should say that. Right now, the emperor has no clothes.

Al-Monitor:  Why is that a delusion?

Yogev:  Before the disengagement, I stood before the joint committee chaired by Prime Minister Ariel Sharon and Defense Minister Shaul Mofaz. They gave me two minutes to speak, as head of the Officers’ Forum for Security and Peace. I claimed that the disengagement would lead to an increase in terror and to missiles landing on the outskirts of Yavne. The prime minister asked Mofaz to respond to me, and he did so with a single, brief sentence: "I think that the situation will improve."

I don’t think that was a professional position, but rather a position based on fantasies. If the right were ever called messianic, then there is a messianic position among the left of today. I also believe that we should take care of the Palestinians and offer them a better life than they would have in any neighboring Arab state. You won’t find me hating Arabs. Actually, quite the contrary. There is peace on the ground and a desire for cooperation among the towns and villages. The more this reaches the level of leadership, the greater the efforts they make to dismiss it.

Al-Monitor:  If Netanyahu does reach an arrangement — and that has happened before with other right-wing leaders — what will happen? Some claim that unlike what happened with the disengagement, the settler community won’t take it sitting down.

Yogev:  Our role is to convince people and explain how this would result in a lack of security for the people of Tel Aviv and Raanana. If, God forbid, anyone tries to promote this, I believe that the internal consequence could be more disastrous socially than any Iranian missile, against which we all know how to unite. Things will fall apart here.