In an interview with Al-Monitor, newly elected Likud Knesset member Yoav Kish argues that any territorial concession under current circumstances will end up with Islamic extremists taking control of that land. 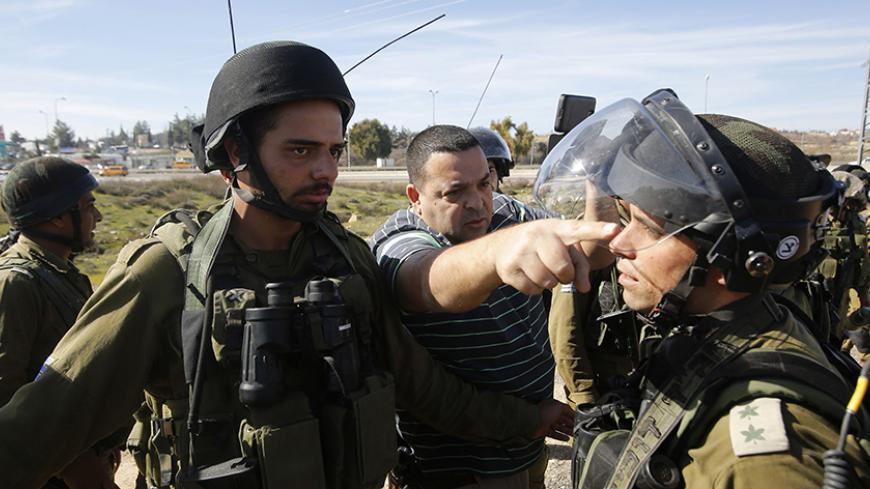 An Israeli settler argues with Israeli soldiers during a protest organized by Palestinians against Jewish settlements near the settlement bloc of Gush Etzion, in the southern West Bank city of Bethlehem, Jan. 23, 2015. -

When viewed from the observation post of the Neve Daniel village in the Gush Etzion settlement bloc on June 8, reports concerning anti-Israel boycotts seemed trivial and remote. Set against this stunning view, with the settlements of Gush Etzion on one side and a sweep of Israel’s coastal cities and towns on the other, Yoav Kish, one of the Likud’s newest members of the Knesset, promised his guests that he would do everything he can to support the settlement enterprise. He also declared that talk of a two-state solution is unrealistic, given the present circumstances.

Kish has all the qualifications to make him a settler favorite in the current Knesset. He believes any diplomatic move that involves the ceding of territory would be disastrous, because that territory would be seized by Islamist forces and terrorist organizations. Added to his right-wing worldview is the fact that Kish is a fighter pilot in the reserves with the rank of lieutenant colonel, and that before he was elected to the Knesset, he flew Boeings for the Israeli national carrier, El Al. In other words, he is the salt of the earth.

During Operation Protective Edge in July-August 2014, Kish, 46, was called up to reserve duty to serve as a fighter pilot. He was elected to the Knesset for the Likud Party in the March 17 elections and now serves as a member of the Foreign Affairs and Defense Committee. In that capacity he agrees with growing assessments that given the current situation, it is only a matter of time before there is another round of fighting in the Gaza Strip.

In an interview with Al-Monitor, he insists that there is no connection between the boycotts and the settlements. He claims that the Israeli air force’s fighter pilots adopt the most stringent humanitarian criteria over operational considerations when launching their attacks, to avoid causing any harm to innocent civilians.

Al-Monitor:  Did you always think that a two-state solution was a mistake?

Kish:  When the prime minister discussed a two-state solution during his Bar Ilan speech six years ago, the right thing to do was to assess the idea. But several things have happened since then, and I now think it is the wrong approach. The reality we face speaks for itself. It is not as if I want to see a binational state here and grant Israeli citizenship to the Arab population of Judea and Samaria. What we do see, however, is that we have no one to talk to. We have no partner, and of course, unilateral withdrawals are not up for consideration. Any territory that we hand over is immediately seized by radical Islamists. Obviously, we can’t allow that to happen right on our doorstep.

Al-Monitor:  We have just faced some very turbulent times regarding boycotts, including the FIFA incident, French telecommunication giant Orange and the expansion of the BDS [boycott, divestment and sanctions] phenomenon. Aren’t you bothered by Israel’s growing isolation and the implications it will have on the country?

Kish:  The whole issue of boycotts has nothing to do with the diplomatic stalemate. It is just a tool being used to goad Israel. It is not a consequence of the situation in Judea and Samaria. There is a coordinated effort underway to challenge the very existence of the country and of our basic rights to this land. We will do everything we can to oppose that. I claim that we must look at all these boycotts as another front against an enemy that is trying to attack us. We will fight back, and we will defeat it.

Al-Monitor:  How can you justify a situation in which a democratic state occupies another people, especially in the 21st century?

Kish:  It’s very simple. I think that any Arab living in Judea and Samaria is better off than any Arab living in Gaza or Syria, for instance. We must demonstrate that, instead of apologizing for it. After all, they are the last people who can lecture us about their rights and their current situation. The same is true about the Arab members of the Knesset. They have no right to talk to me about discrimination, since they are partners in all of the decisions and everything else underway in this country. That is why we must establish a strong wall against their boycotts and the system of vilifying us by talking about our rights to this land and about the fact that we protect and respect the human rights of minorities living among us.

Kish:  Of course. There is a direct link between everything that is happening in Gaza and the disengagement plan. At the time, I opposed the disengagement and voted against it in a poll of Likud Party members. Unilateral moves are a sure recipe for disaster. Look at what is happening with Hamas in Gaza. Even if we reach agreement over a withdrawal, we encounter a very problematic and dangerous reality. That is why withdrawal is a recipe for disaster. We are living in a time in which we must remain strong and stay in control, because anywhere we concede, we will find a stronger, more dangerous enemy trying to hurt us.

Al-Monitor:  We don’t live in a vacuum. There is an international reality that is not in our favor. Your worldview doesn’t take that into account.

Kish:  I am fully aware of the difficult situation faced by the people of Gaza as a result of Operation Protective Edge. I think that we should work together with the moderate Arab states to rebuild Gaza in exchange for its demilitarization. I regret to say that right now we are missing that chance, which means that we may yet find ourselves facing again a solidly established Hamas and a new network of tunnels. What I would say to them is this: You want our support? We want demilitarization. Maybe that way we would spare ourselves from the next round. Right now, the situation that we are creating in Gaza is just like southern Lebanon. In other words, instead of reaching a situation in which we are able to weaken Hamas and make sure that it does not rearm, we are once again repeating the ritual of yet another round [of violence]. It is quite possible that Operation Protective Edge wasn’t enough to deter them just as Hezbollah is deterred [in Lebanon].

Al-Monitor:  What about in Judea and Samaria?

Kish:  Right now, given the current circumstances, it is impossible to move ahead in any way in Judea and Samaria. Anything we do there would be dangerous and risks fostering more extremism there. It is just a meter away from Ben Gurion Airport, from our towns and neighborhoods and from the flourishing, thriving Jewish regions of the country. The whole idea is irrelevant for now. I refuse to face the wall and risk our security.

In the long term, if we manage to create a reality in which the Palestinians extend a hand to us in peace, we can respond by establishing a situation in which they have greater freedom of action in those areas that they inhabit. Even now, 90% of those Arabs vote for their own parliament, and enjoy self-rule in just about everything. All that Israel continues to control is security, and that’s a good thing.

Al-Monitor:  During Operation Protective Edge, you came out against the claims that the air force is killing children, as expressed by Haaretz journalist Gideon Levy in his article, “Lowest Deeds from Loftiest Heights.” Why were you so upset?

Kish:  I participated in the operation and don’t want to go into details of what I actually did there. During that period, I was a professional pilot in the air force. I never met Gideon Levy, so at the time I thought that what he wrote was based on sheer ignorance. I tried to explain that. I wanted him to understand how many precautions the IDF [Israel Defense Forces] and the Israeli air force take to avoid harming uninvolved [innocent] civilians, how often we cancel operations to avoid casualties. How often we check ourselves, again and again, to avoid mistakes. Nevertheless, we are fighting in a very densely populated area, and it happens. We study our mistakes so that we do not repeat them. I can say with absolute certainty that we do much more than any other army to avoid harming uninvolved civilians. Then I realized that he wasn’t writing out of ignorance, and that there were many other interests at play. It was a blow to our solidarity. He was one of a series of irresponsible voices, detached from reality, who were trying to deliver a blow to our own unity.

Kish:  There has been a long process underway in the past few Knessets in which there has been greater recognition of the status of reservists, but it is not enough. The integration and drafting of Arabs and the ultra-Orthodox is important, both as a value and educationally. The mistake made by the previous government with Yesh Atid was that it harmed the ultra-Orthodox sector by trying to stigmatize them. That only caused them to insulate themselves even more and distance themselves from the rest of the country. It was the wrong way to go about it. We should be working together with them and with the Israeli Arab population to advance a civil service program. That way, every young person can contribute to the state once they reach the age of 18, and we won’t find ourselves living in a country made up of disparate tribes. This would create a sense of camaraderie and foster a sense of belonging to the state.

I would like to see every young person who reaches the age of 18 give two years of service to the country, regardless of whether it is military service or service in some civilian capacity. That is what we should be striving to achieve.