In an interview with Al-Monitor, Yesh Atid Knesset member Aliza Lavie claims that the new laws excluding many Israelis from ritual baths and undoing the core curriculum requirements for ultra-Orthodox children are ominous signs of the ultra-Orthodox stranglehold on the government. 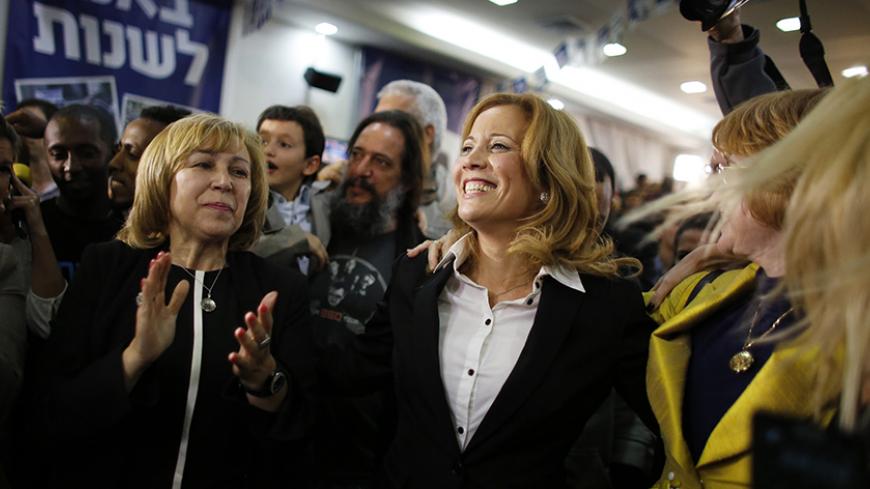 “The ultra-Orthodox parties are drunk with power in this government. They run it,” said Knesset member Aliza Lavie in an interview with Al-Monitor.

Lavie, who holds a doctorate from Bar Ilan's School of Communication and lectures there on gender and multiculturalism, is a religious woman successfully operating within Yesh Atid, a secular party. Yet this week, she and her colleagues watched as their party’s achievements from the last government all collapsed, one after another. It began with the mikveh law, which denied conservative and Reform Jews access to ritual baths. The law was approved by the Knesset plenum in its third reading July 25. This defeat was followed July 26 by the Knesset’s vote to repeal the core curriculum law that required ultra-Orthodox schools to teach mathematics and English to receive state funding.

Al-Monitor:  Yesh Atid had a tough week. You spoke out harshly against the mikveh law, which the Knesset approved this week. What is the meaning of this law?

Lavie:  This is the first time that there is a law concerning ritual baths in legislation. What they are effectively saying is who can and cannot go in. That stands in sharp opposition to the approach taken by Judaism.

When we build a town or a village, the first thing we build is a ritual bath, before we even build a synagogue. The mikveh is the center of Jewish life. It is one of the three commandments for women, without which there can be no Jewish life. For generations, there were alternatives to the mikveh, like a river or a stream. It was something available to everyone. Now, however, for the first time ever, the ultra-Orthodox parties are so drunk with power that they are changing the rules. Instead of being a place of purity, the mikveh has become a place of exclusion.

Al-Monitor:  Why did the ultra-Orthodox champion such a law?

Lavie: When the rash, bitter argument pitting the ultra-Orthodox against the Reform and conservative movements failed to make headway in the public sphere, the ultra-Orthodox shifted the debate to the ritual baths. The current law is a response to a recent Supreme Court ruling, which states unequivocally that mikvehs are public property, and that they are part of the religious services that every citizen of Israel is eligible to receive. As soon as the ultra-Orthodox heard that, they went straight to the prime minister and demanded that he pass the mikveh law as quickly as possible.

The current law is a slippery slope that will hurt all women, including women converted in accordance with Orthodox halachah, but in programs that offer alternatives to the failed conversion system in the State of Israel.

It is a slippery slope because once you start giving the power to determine who can and cannot use a mikveh to local religious councils, there is no end to it. They can decide arbitrarily that certain rabbis are not entitled to conduct marriages. It is sad and absurd that instead of expanding religious services and making them more accessible, the religious establishment is busy reducing and limiting those services. This is not the Judaism that I know. It is not an open-hearted Judaism.

Al-Monitor:  Will you fight against the law? Will you take it to the Supreme Court?

Lavie:  Throughout the entire process, I appealed to the legal counsel of the Knesset, asking him if he could defend the law. I also appealed to the state attorney general, and I am not at all certain that he could continue defending this law either.

The ultra-Orthodox parties in the current Knesset are drunk with power. We saw the same thing with the core curriculum issue. The ultra-Orthodox effectively run the government. They are making threats against the coalition. Many of my friends and colleagues in the coalition are angry about the mikveh law. Anyone who could strike a deal with an absent opposition member did it just so that they wouldn’t have to vote on it. It is a bad law that involves religious coercion.

Lavie:  I am hurt and upset over this. The law causes enormous harm to ultra-Orthodox boys and girls. When the issue of the core curriculum was raised in the Knesset plenum, many ultra-Orthodox journalists came and told me that it never should have happened. I hear from many ultra-Orthodox Jews that they are saving money so that their children can take private lessons in English and other subjects. What will come of all that? We will have a situation in which some can and some can’t. Ultra-Orthodox children whose parents can afford to offer them a private education will succeed. I am not worried about the children of the ultra-Orthodox Knesset members. I’m not worried because they will direct their children to the right paths.

Not enough people know about how many ultra-Orthodox Jews want to live a different lifestyle but can’t. After all, by the time they are 22 or 23 and already have two kids, it is very difficult to learn English. It is simply too hard to find the time for it. Why shouldn’t they be afforded the opportunity? After all, their ultra-Orthodox brothers overseas sit and study the Torah in English. They learn the Talmud in English. They can also study religious subjects in English for two hours a day. It would be the right thing to do. I feel bad that they are taking these children’s futures away. As a society whose employment opportunities are changing right in front of us, we know that by 2040, most of the uneducated workforce will come from the ultra-Orthodox and Arab sectors. That is why, as a country, we must examine how we can transform the dire state of the Israeli workforce.

Al-Monitor:  There is a feeling that the ultra-Orthodox are fighting against Yesh Atid and getting back at your party. Is that what motivates them?

Lavie:  The ultra-Orthodox are in a different place now, so they want to lash out at us by forcing the repeal of the law. What I tell them is: Think about your children. What tools are you providing them with for the future? What you are doing is determining that they should be "hewers of wood and drawers of water” — to be servants to the rest of Israeli society. Why?

I also look at this in my capacity as a social representative of the public. I contend that this is the swan song of the ultra-Orthodox parties, because the train has already left the station. We can see how the ultra-Orthodox are doing everything they can to attain an education, whether it is through separate colleges or parallel tracks at the various universities. Still, that education should be accessible to everyone, and not just to people who can afford it or who live within the proper social circles.

Al-Monitor:  The most recent scandals involve Orthodox Zionism. Do you think that statements made by Israel Defense Forces Chief Rabbi Eyal Krim and Eli pre-military academy head Rabbi Yigal Levenstein against gays and women indicate an internal crisis within Orthodox Zionism as a result of conflicting worldviews?

Lavie:  The clash between the ultra-Orthodox and Orthodox nationalist approaches didn’t begin today. It is just intensifying due to social and cultural changes. I saw Rabbi Levenstein's letter of apology. I am pleased with it, and can only say that it is too bad that he wrote it so late. I also marched at the gay pride parade in Jerusalem last week along with many thousands of people who came to protest efforts to disparage an entire community. That is not our way. I invite Rabbi Levenstein to join the circle of patience and tolerance. You can’t speak so harshly, certainly not when you are in a place where you have so much influence on students, male and female alike. I am also glad that Rabbi Krim released his own clarification about what he said. He is a rabbi who receives considerable praise for his professional work. Nevertheless, during the vetting process, people should have been aware of what he said in the past and taken his misstatements into account. What happened was a mistake.

Al-Monitor:  How do you think the Women of the Wall’s struggle for praying freely by the Western Wall will end?

Lavie:  I was the first person to invite the Women of the Wall to open a dialogue, when I was just a young parliamentarian. At the time, we reached a compromise. The key now lies with the prime minister, who promised to reach an arrangement with them. I hope he doesn’t take his promise back, because the damage would be huge, not only here but among Jewish communities around the world too. Violating that promise is also part of that same slippery slope. First it was conversion, then the Western Wall and now mikvehs too. I don’t understand the prime minister. On the one hand, he says that he works very hard to consolidate our bond with the Jewish community around the world. On the other hand, he has caused enormous damage. The ultra-Orthodox run the government.

Al-Monitor:  Do you see any possibility of the Zionist Camp and Yesh Atid consolidating forces before the next election in order to defeat Benjamin Netanyahu?

Lavie:  No. There are post-Zionist trends within the Zionist Camp. We can see it in the way that they express themselves about the role of the state, military service and priorities. Some members of the Zionist Camp have adopted anti-Zionist approaches. These include Knesset member Zuhair Bahloul, who has argued over whether we can even use the term Zionist. Given all of that, I don’t see a joint future for us.

by Murielle KASPRZAK and Joseph SCHMID | AFP | May 26, 2022
END_OF_DOCUMENT_TOKEN_TO_BE_REPLACED