Israel's war between the Jews

While the international community keeps trying to end the conflict between Israelis and Palestinians, many Orthodox Israelis reject not only Arabs but all also other Jews. 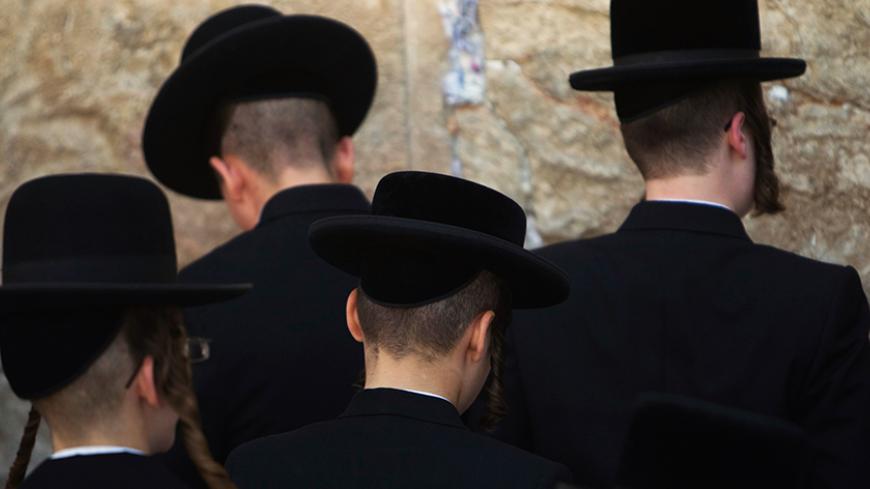 Ultra-Orthodox Jews take part in a morning prayer at the Western Wall in Jerusalem's Old City, May 31, 2012. The ultra-Orthodox Jews have gone from being a tiny minority in Israel's mostly secular society to its fastest-growing sector. They are exempt from military duty, but draft deferments and state subsidies for the ultra-Orthodox have become a divisive political issue in Israel. - REUTERS/Ronen Zvulun

Most of the headlines in the Israeli media regarding the broad-ranging Pew Research Center survey published March 8 dealt, rightly so, with the troubling attitudes of Jewish society toward the Arab minority in Israel and the Palestinian population in the territories. The public discourse of the past week focused on findings that illustrate racist and discriminatory trends, such as the 79% majority who believe Israel’s Palestinian citizens deserve fewer rights than its Jews. It is probable that members of the UN delegation the Security Council is considering sending to the West Bank and to Israel would keep this data in mind. Al-Monitor has learned that the delegation — a fact-finding mission — would be asked to examine the feasibility of the "two state for two peoples solution." President Barack Obama's administration has been paying particular attention to this conflict recently. In a last-ditch effort, it is seeking to extricate the diplomatic process between Israel and the Palestinians from its quagmire by promoting this new UN initiative.

Judging by the survey's finding, the Jewish people residing in Israel would rather the Palestinian people find themselves a state across the river or over the sea. Also, the poll reveals that while the Jews living in Israel share the same country, their views on culture and religion are widely divergent. East against West.

Following the Feb. 11 Supreme Court decision allowing those who undergo Reform and Conservative conversions to Judaism to use the ritual baths, Knesset member Yisrael Eichler of the ultra-Orthodox Yahadut HaTorah Party wrote, “Not every mentally ill person can come into an operating room and lay down medical rules. Just as the Supreme Court cannot force a hospital to let in its own surgeons and medications, this is beyond the pale to force mikveh managers to allow Reform conversion ceremonies to take place in a Jewish mikveh.” Eichler said, “The Supreme Court has no authority to impose Jewish halachic law, the source of which is the Torah.” He accused the court of an attempt to generate wars of religion in Israel, similar to the “inter-religious war in Syria and Iraq.”

The Knesset member, whose party is a member of the coalition government, was referring to the High Court ruling, canceling the exclusive control of the Chief Rabbinate over the mikvehs. This ruling was based on the law banning discrimination in the provision of services and entrance into public places.

In a March 6 meeting with Netanyahu, ultra-Orthodox ministers Aryeh Deri and Yaakov Litzman and ultra-Orthodox Knesset member Moshe Gafni demanded that the government promote legislation to circumvent the court’s decision. A week later, after threatening a coalition crisis, the ministerial committee on legislation approved a proposed mikveh bill, stating that mikvehs are not a "public service." Thus, the issue of discrimination would not apply.

At that same meeting with Netanyahu, the ultra-Orthodox politicians also demanded the nullification of an arrangement, approved by the government, allowing Reform and Conservative Jews, along with the Women of the Wall — an equal prayer rights movement — and the Jewish Agency to jointly administer the new prayer space by the Western Wall allocated specially to them. Netanyahu announced that he was suspending the arrangement until he gets an alternative proposal from the chief rabbis, who object to any change in the Western Wall status quo.

Rabbi Baruch Dov Povarsky, head of the Ponivej rabbinical college and member of the Torah Sages Council, attacked Netanyahu, who dared come in contact with the leaders of the “heathen.” According to him, it’s no wonder that the Zionists are meeting with those who seek to uproot religion, given that “in his heart, the prime minister would also like to be like them,” so he said.

No one can really tell what Netanyahu believes deep in his heart. Nonetheless, it is worth noting that it was not Netanyahu who initiated the changes in praying spaces by the Western Wall or bathing in the ritual baths. Much like all other politicians who governed Israel since the state was founded, Netanyahu walks the fine line separating the principle of equality between the different streams of Judaism and the control of the Orthodox sector on the State's Chief Rabbinate and other religious institutions. Netanyahu, to his political detriment, finds himself between a rock and a hard place — between the rock of the Supreme Court, supervising the rule of justice and preventing discrimination, and the hard place of coalition considerations.

If no compromise is found in the near future, Netanyahu will be forced to decide in the escalating conflict between the progressive streams that constitute the majority of US Jewry (36% to the Reform and 18% to the Conservative community, according to the Pew survey), and the Orthodox stream in Israel, which has the power to crown or topple prime ministers.

Either way, it seems that the question of ''who is a Jew'' — a debate that was sidelined by the violent Israeli-Palestinian conflict, is gradually retaking a major place on the Jewish democratic public agenda.