While diplomatic negotiations are again underway in Washington, the Israeli right vows never to repeat the mistake of withdrawing from the Gaza Strip. 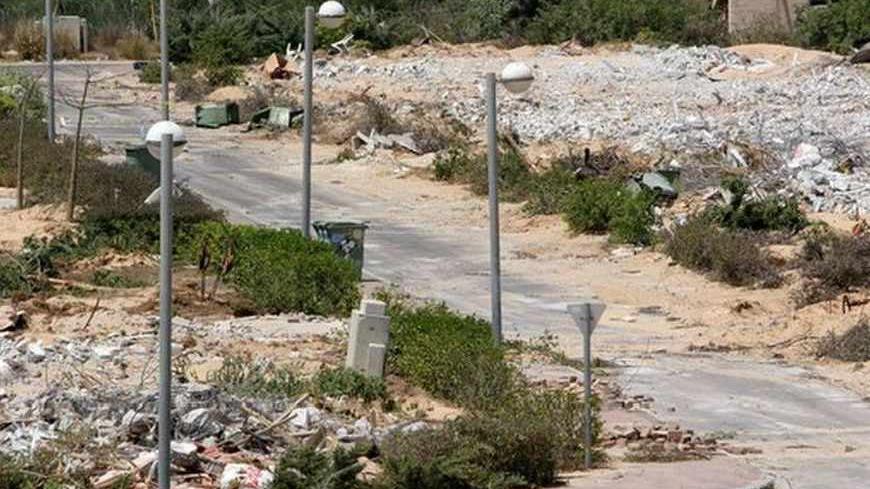 At the entrance to the Nitzan caravan site, I stop by the shop of Esther Buskillah. I had first met her when she was living with her family in the small settlement of Nisanit in northern Gush Katif, the block of Israeli settlements in the Gaza Strip evacuated in 2005. Like all the other 8,000 residents of the settlement, Buskillah was evacuated by Israel Defense Forces (IDF) soldiers and sent to live in Nitzan, a huge caravan site set up on the sand dunes of the southern Israeli city of Ashkelon.

It's noon and the sweltering heat has driven away the inhabitants of the temporary settlement. In her little shop, Buskillah sells gifts and souvenirs to foreign and local tourists. There is not a soul out there in the scorching midday heat. Opposite the shop, there is a caravan turned into a museum commemorating the history of Gush Katif.

“It isn’t just the heat; it's also because everyone here is so depressed,” said Buskillah, half-joking, half-serious. “After all, what would you expect? We have lost the joy of life we used to have in Gush Katif. And what's left? Our kids have still not recovered from the trauma of displacement. And we have not yet found real jobs. Unfortunately, to this very day, we are aching over our community, which has been shattered since we left Gush Katif.”

Not far away, a woman named Rachel (she chose not to share her last name) is hanging her laundry out to dry, as she did eight years ago in her spacious home in Neve Dekalim. I had come to know her, too, then. Time has left its mark on her face, which is lined now, having aged prematurely. She has no doubt that her feelings of anguish and distress are the cause of her depression.

After first arriving here, Rachel was told that she had only two years to find another place to settle, where she would be able to build a new life for herself, her husband and their eight children. Alas, eight years have passed, and Rachel and Buskillah are still stuck in this temporary site, which seems to have become a permanent settlement. It is no more than a cluster of shanty houses or caravans, really, whose walls have deteriorated over the time and which now look like the ma'abarot, the refugee camps set up to provide accommodations for the influx of new immigrants to Israel in the 1950s. The grass grows wild, and the wooden houses have been yellowed by the blazing sun.

Next to many of the caravans, huge containers are still standing, holding the personal belongings the families took with them when evacuated from their homes in Gush Katif. It may be reluctance to let go of the still-vivid memories of their previous life, or perhaps unwillingness to settle down in the new place, but the fact is that for years, these containers have been lying around, untouched.

Six billion shekels (more than $1.5 billion) has been spent by the state of Israel since 2005 to rehabilitate the evacuees. Some of the families were awarded a record compensation of more than $1 million for the agricultural land they owned, whereas most of the families got just over half a million each. However, only four out of ten families evacuated have managed to rebuild their lives in new places. The others are still licking the wounds of displacement and unable to restore their lives. As noted, the Nitzan site was to serve as a temporary settlement and to be dismantled after two years, but this has not yet happened.

This year, as in previous years, commemoration rallies, events and prayers were held in memory of that day in August 2005 when the IDF uprooted 8,000 people from their homes in the 21 settlements of Gush Katif.

Although Israel is a young country, memorial days have become an intrinsic part of the Israeli ethos. Some sociologists even go as far as to argue that the state has become addicted to the commemoration of historic events, in particular those involving a tragic memory. Recently, the memorial day commemorating the uprooting of Jews from the Gaza Strip was added to the list.

While most Israelis have adopted the term “disengagement,” coined by former prime minister Ariel Sharon to describe the Israeli withdrawal from Gaza, the evacuees themselves and others who opposed the evacuation still consider it an “expulsion” and “uprooting.” The evacuees and their sympathizers are now marking the eighth anniversary of the evacuation of the Jewish settlement in Gaza. In virtually every gathering and from every possible podium of the religious Zionist community, the “tragedy” brought on those settlers by the state of Israel is lamented over and over again.

A few days ago, on the memorial day of the Gush Katif expulsion, Minister of Housing and Construction Uri Ariel took the podium and literally broke into tears. It took several long minutes before he was able to calm down. His fellow HaBayit HaYehudi party member, Knesset member Motti Yogev, addressing the Knesset, described the withdrawal from Gaza as “one of the most traumatic events the state of Israel has experienced. When we call to mind that time of expulsion, tears fill our eyes.”

Eight years later, it seems that the memory is growing ever more poignant. Now that the talks between Israel and the Palestinians have been resumed, the right-wing parties are threatening to quit the coalition headed by Prime Minister Benjamin Netanyahu so as to forestall a re-enactment of the “Gush Katif precedent,” as their leaders put it. The possibility that settlers may be once again uprooted from their homes haunts right-wing activists.

Rabbis and settler leaders have vowed that Gush Katif will not be re-enacted, that no such evacuation will ever happen again. This time around, there will be no dialogue with the government, the way it was in the previous evacuation, and there will be no surrender, either. They feel that had they presented a firm front in opposition to the government that time, they could have foiled the plan.

“We were so naive then,” reminisced Buskillah. She still remembers the state officials who came to visit her at her home in Nisanit before the disengagement, reassuring her that every family would receive full compensation and support from the state.

“They promised us the moon. Unfortunately, all the residents of Nisanit trusted them to keep their word. But look what has happened. Eight years have passed by and here we are, our families crushed and we are all, children and parents alike, in need of psychological treatment. We are still stuck in this place and almost all of us take antidepressant pills.”