Daniel Ben Simon spent the Holocaust Remembrance Day with Ganei Tal settlement evacuees, for whom the disengagement from Gaza is more than a memory. 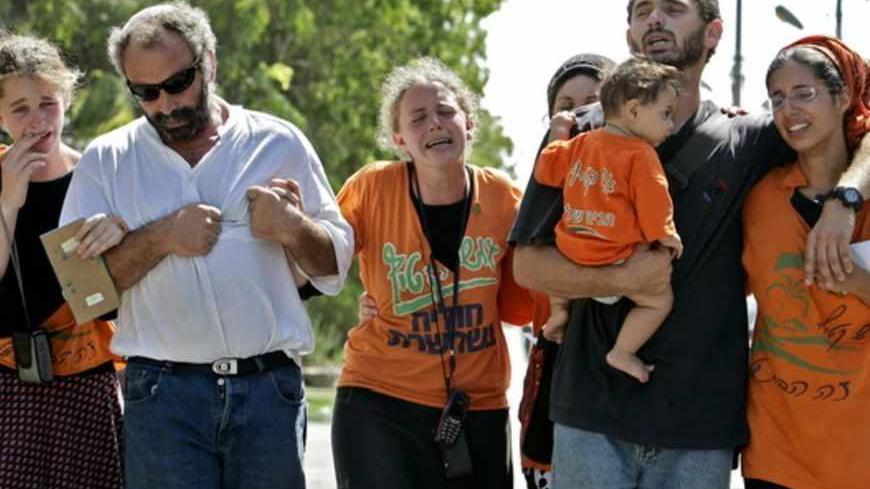 Jewish settlers cry as they walk to the synagogue for a ceremony before departing the Jewish settlement of Ganei Tal, in the Gush Katif settlement bloc, in the southern Gaza Strip, Aug. 17, 2005. - REUTERS/Jerry Lampen

GANEI TAL, Nahal Sorek Regional Council — At the entrance to the settlement, a huge sign is hanging, carrying a brief description of the traumatic ordeal the Ganei Tal settlement went through. It reads as follows: “Sixty-five years after the establishment of the state of Israel, 31 years after settling on the land of Gush Katif, and five years after we were expelled from our homes, we, the settlers of Ganei Tal and our descendants, with our heads high, are settling down on our new land.” On the other side, another sign reminds the local residents to register their children for the annual trip to the concentration camps in Poland.

All 65 families evacuated from Ganei Tal in the framework of the disengagement from the Gaza Strip in the summer of 2005 eventually moved to the environs of the southern city of Ashkelon, where they established a new settlement on land that had previously been cultivated as a corn field. For eight years, most of them wandered from one temporary settlement to another, waiting for the construction of their new homes in the new settlement, named after the original one in the Gaza Strip, which had been destroyed.

It is Holocaust Remembrance Day today [April 8], and the few residents who stayed behind are at home. The main streets, just paved, are deserted. In a week, they will celebrate Independence Day here, but hardly any of the residents hung the Israeli flag outside the window or the balcony. They feel that the state has betrayed them. Yitzhak Amergi, outraged at the “expulsion,” as he calls it, from Gush Katif, has deliberately refrained from flying the flag of Israel since he was uprooted from his home about eight years ago.

Amergi, an industrialist who did well in his business before being displaced, still finds it difficult to get used to his new life. In his eyes, the expulsion of Jews from Gaza is no different from the expulsion of the Jews from Spain [in 1492] or the expulsion of the Jews from Europe. While then Prime Minister Ariel Sharon coined the term “disengagement” with reference to the evacuation of 8,000 settlers from the Gaza Strip, the settlers themselves interchangeably use the terms “expulsion” and “uprooting” to show their hard feelings about Israel's withdrawal from Gaza after nearly four decades of Israeli control over the area.

Almost eight years have passed since; however, Amergi has not yet found his place in life. A few months ago, he inaugurated his new house, but he did it without enthusiasm. He and his wife are still missing their old home. They both hope that one day they, along with their friends, will build anew their homes in Gaza.

Shlomo Wasserteil, 64, a skullcap on his head, looks back with longing. He was one of the founders of Ganei Tal. Most probably, he was also the last Israeli who left Gush Katif. On the day of evacuation, he remained in the living room of his empty house, sitting there for hours after the soldiers had left. Whenever he recalls those dramatic hours, tears well up in his eyes. Being a believer, he hoped that God would work a miracle and stop the “uprooting” from Gaza. Alas, that same day, he said a sad farewell to the 40 Palestinian workers who had helped turn his plant nursery into one of the most beautiful in Israel. They hugged and cried on the shoulder of each other. Occupier and occupied were brought together in a rare moment of common destiny.

As he was sitting there alone, before being banished from his home forever, the darkness of death around him, he looked at the million plants that were about to be orphaned from the man who raised and nurtured them as if they were his kith and kin. He felt that, like him, they were sobbing softly, distraught with the pain of the separation forced upon them. At dawn, the officer in command of the evacuation arrived and, putting a hand on his shoulder, asked him to leave his home. Once he was outside, a huge tractor raced into the house and smashed the living room and one of the other rooms. Wasserteil almost collapsed. Twenty eight years of his life there, in what used to be his home, fell to pieces in a flash.

The passing time has not healed the pain. “It is still aching,” Wasserteil noted, his eyes once again filling with tears. “It's the same wound. I hear that for bereaved families, the grief never lessens and with the years, it becomes more and more difficult for them. I am not drawing a parallel, Heaven forbid. But think about it; you get up in the morning and you have nothing to do. You made a decent living off what you most enjoyed doing — growing plants and flowers, and then, all of a sudden, you are left with nothing. I was a world expert in my field. They were coming from all over the world to ask for my advice. And then, just like that, you wake up one morning and there is nothing for you to do. To tell the truth, what are you doing? Nothing. Nothing at all!”

It is Holocaust Remembrance Day today, eight years later, and the traumatic events of the evacuation from Gush Katif evoke in his mind other horrors entwined in the history of the Jews. His mother was born in France and his father, in Germany. Their parents were sent to their deaths at Auschwitz, and the scar in his heart has not yet healed. That’s why he urged his 17-year-old son to go on the trip to the extermination camps in Poland — so that he would know that there were days when Jews were defenseless and helpless, so that he would realize that he was living in the best and most secure time for the Jewish people. “I wanted to instill in him the awareness that he was a link in the chain. I wanted to tell my son: Don’t drift away! Jews in Germany sought to escape their Judaism, until someone reminded them who they really were.”

However, painful as the evacuation from Gush Katif may have been, it made him sick to see parents attaching orange Stars of David to the shirts of their young children in the days of the disengagement, as they were forced out of their homes. The sight of children holding their hands up as they were escorted away by Israeli soldiers stirred up a storm in Israel. Some argued against the misappropriation of the Holocaust, while others went as far as to accuse the parents of those children of misusing the Holocaust for political purposes.

“I recall that some of the settlers expelled from their homes told me that they felt as their parents must have felt in Nazi Germany,” he reminisced. “’At the time, we were deported by Russian soldiers and German soldiers and now we are driven away by Jewish soldiers,’ they said. I told them it was not the same thing.”

At that point, the Holocaust Remembrance Day siren was sounded, interrupting for a moment the flow of life in the new community. Wasserteil stood still. “For me, this siren signifies only one thing,” he noted, his eyes moist. “It is a sign of what I and my generation have won. For 2,000 years, we, Jews, would have given anything to be where I am today. And regardless of all that we have gone through, the Jewish people is secure at present more than ever before, more so than in any other time in Jewish history. And this is what I feel on Holocaust Remembrance Day – that notwithstanding the Holocaust, it is the Jewish people that ultimately won the battle.”