The Israeli parliament has ratified a bill for the relocation of Bedouin from “unrecognized” settlements to permanent villages, despite objections by the Bedouin community. 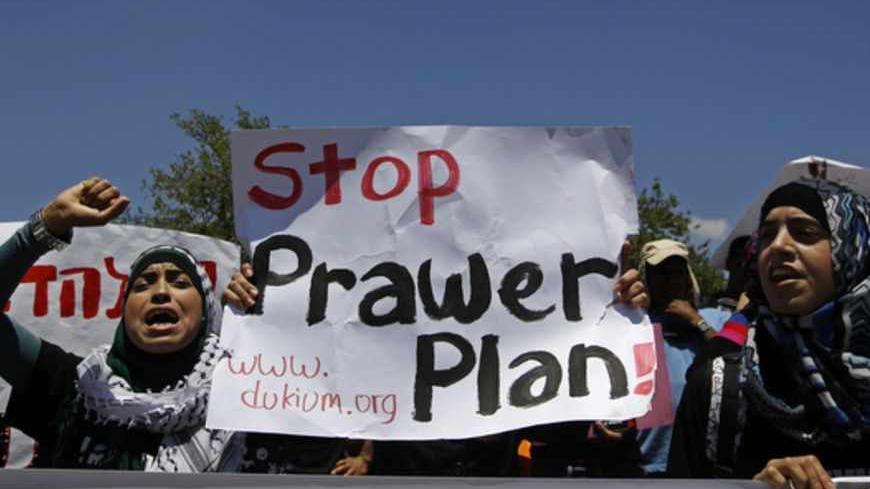 Bedouin women hold signs as they participate in a protest against a plan to formally recognize Bedouin communities in the Negev desert, outside the Knesset in Jerusalem, May 27, 2013. - REUTERS/Ammar Awad

On June 24, the Prawer Bill — the government plan for regulating unrecognized Bedouin settlements in the southern Negev region and resolving disputes over land ownership — passed the first Knesset reading.

The bill, formulated by former Likud minister Benny Begin, implements the recommendations of a committee headed by former Justice Eliezer Goldberg to examine the issue of Bedouin settlements in the Negev and to offer solutions.

The approval of the bill in the Knesset, by a narrow margin of 43 votes in favor versus 40 opposed, stirred up a storm in the parliament's plenum. Arab Knesset members Ahmad Tibi, Jamal Zahalka and Mohammad Barakeh walked out during the vote. Once back in the plenum hall, they each tore up a copy of the bill in front of cameras.

If the Prawer Bill passes the second and third Knesset readings, it will empower the government to dismantle the illegal settlements of the Bedouin community and move their residents into permanent settlements built for them.

In an interview with Al-Monitor, Sami Amrana, a resident of Segev Shalom (Shaqib al-Salam in Arabic), one of the seven permanent Bedouin towns built in the Negev in the early 1980s, says that the rough treatment of the Bedouin over the years has opened a deep rift and led to distrust between the Bedouin community and the Israeli authorities.

“They show up on the scene and, employing force and violence, tear down the dwelling place of a Bedouin [family]. And they don't even bother to take care of the people whose home has just been demolished before their eyes — call a social worker to help them or offer them an alternative accommodation —nothing. It could be a child with special needs, a widow or an elderly man — they are all uncaringly left outdoors in the heat or cold. Such treatment inevitably fans the flames of hatred.”

So maybe the proposed law will at long last put things in order and prevent a situation where everyone settles wherever he wants?

“In the past, there was trust between the Bedouin community and the Jewish society. My father was one of the first scouts in the Israel Defense Forces and served in the army for 21 years. His body is still riddled with shrapnel, but the trust is lost. You come and destroy my home, without showing minimal sensitivity, and then you ask me to conduct negotiations with you on my future. How can I possibly trust you?"

Amrana goes on, “I'll give you a simple example. For me, personally, it was most painful to see the evacuation of Gush Katif [Israeli settlements in the Gaza Strip evacuated in 2005]. It hurt me to see people being moved out of their homes, driven away from the place they have grown up in. True, deep inside, I know that they were not right, but they were not to blame, either — it is the government that stuck them there, only to evacuate them later on. Watching that evacuation, I felt a shiver down my spine. You may be surprised, but I was touched to see the sympathy demonstrated by the soldiers called to move out the settlers. They hugged them, shed tears with them, made sure they received psychological support, brought in social workers — everything.

“But then I ask myself: ‘Why is it that the settler is given a hug, whereas with me, you speak only the language of force?’ We are beaten with brute force; we are treated roughly, while the Jews are embraced. Is this the Jewish people on whose values I grew up? How could a people that survived the Holocaust behave like this? Destroying a home in front of the kids? It scars your soul.”

You are describing an irreparable rift. In fact, no attempt to reach any sort of arrangement would have been favorably accepted by you.

“I am the father of two daughters who are doing national service. I raised them on values — on the belief that the Jewish people cares about other nations. So what can I tell my child when she sees how they pull down somebody’s home and then comes and asks me: ‘Why?’

“During the war [the 2012 Pillar of Defense Operation], cabinet members kept arriving one after the other to the city of Be'er Sheva and visited other southern towns and villages. Nobody thought of visiting us in Segev Shalom. There was not even one single protective concrete structure to shield us. We got nothing. Only after the war were such air-raid shelters installed in our town. But why? Aren’t we a part of the state? We, too, were under rocket fire from Gaza. And when rockets landed on us, it was reported that ‘A rocket landed in an open area.’ It is a lie. Nobody came to talk to us, to encourage us, to give us the feeling that we are a part of this country. And I am telling you all this as a father of a daughter who served in the front lines.”

“Now let them come and talk to us properly, and if it turns out that we have to leave our homes, then we will figure out together how to go about it. You should negotiate with us the same way you do with the settlers. I am not an alien from outer space. I am constantly trying to survive here. I have to convince my kids time and again that everything is going to be just fine, that not all is bad, but I cannot do it anymore.”

Under the Prawer Bill, all the illegal Bedouin settlements are to be evacuated and their residents moved en masse to permanent settlements built for them. How else could it be done?

“In Bedouin society, there are diverse customs and cultures. It is made up of various tribes which cannot be merged. You cannot take, for instance, the Azazme tribe and the Umran tribe and mix them, the same way you cannot incorporate secular Jews into [the ultra-Orthodox Jewish neighborhood of] Mea She’arim. It just would not work.”

“How much does the state expend on us?” He asks. “Is it making any investments in infrastructure? What does the state do for the Bedouin community of the Negev? Nothing! You are not expending even a single dollar on our behalf. However, you keep talking about ‘the Bedouin settlement.’”

According to Amrana, the Bedouin settlement spreads across 3% of the entire Negev. He asks, “Is that so much? Would you call it a takeover?

“And another thing, let's look at the illegal Jewish farms set up in the Negev. You will find that they are connected to the electricity grid, to the water supply system and to any other public utility — they have got it all. At the same time, a Bedouin settlement established 60 years ago still has not received anything at all.”

So what do you think will happen now? Will the Bedouin community of the Negev resist evacuation from its scattered settlements?

“The Bedouin society is a ticking time bomb. I'm afraid that it is going to explode in the face of us all. And it is a pity. After all, I feel good here in this country and I care about this home of mine, which was bought dearly with blood. So let's safeguard it. Let’s try and find the right formula for both our peoples. Let’s show respect and consideration for each other.”

At this point in the interview, Amrana points his finger at the leaders of the Bedouin community, charging that they are disassociated from reality.

You have no representation in the Knesset now. The last of the Bedouin representatives, Knesset member Talab el-Sana, was left out in the recent parliamentary election.

“With all due respect, I am not sure that he represented me. I have my disagreements with him. I don’t see eye to eye with him on everything. He sometimes says things that hurt us in the Bedouin society. Take, for instance, the issue of sharing the national burden. He is against it, but I am all for it. Why should your son contribute his share while my son is exempt from doing his duty? On the other hand, however, we, too, are entitled to equal rights. That’s the way I see it, and I am not ashamed to say it. And you should also take stock and think it over — what have you done for the Bedouin community, and what have you received in return? And you better hurry and do it before it's too late.”