The Israeli plan to relocate Bedouins cannot be properly discussed before a series of actions to mend the rift between them and Israeli authorities rebuild trust. 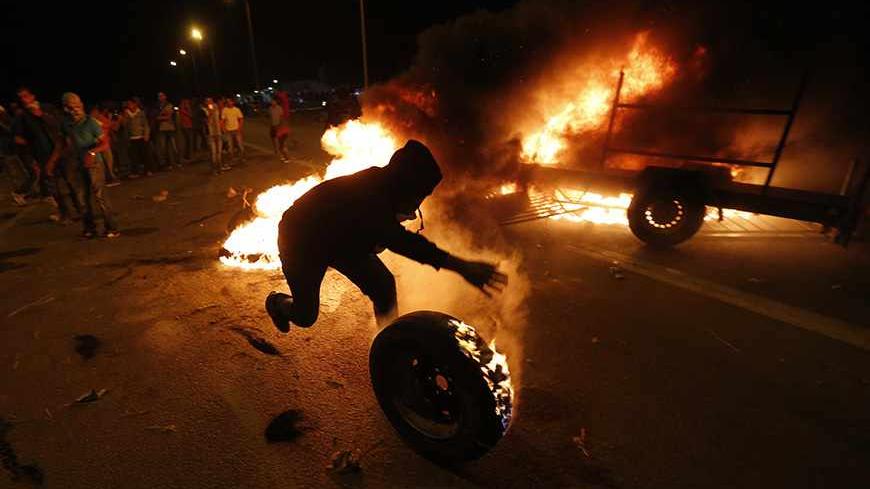 A protester rolls a burning tire toward Israeli police during a demonstration showing solidarity with Bedouin Arabs who are against a government displacement plan for Bedouins in the southern Negev Desert, Hura, Israel, Nov. 30, 2013. - REUTERS/Baz Ratner

The writing was on the wall. The Prawer Bill to regulate Bedouin settlement in the Negev will not go through quietly. Not because it is a really bad bill, and not because it fails to provide a critical and necessary solution for the regulation of unrecognized Bedouin localities, but mainly because of the attitude and approach taken by its authors and the Israeli establishment toward the Bedouin population.

On Nov. 30, even before bulldozers fanned out to demolish unrecognized Bedouin localities and Israeli border and municipal police were called in to forcibly remove tens of thousands of Bedouin residents from their homes, the anger and fury had already erupted. In a series of demonstrations in various locations throughout Israel, dozens of police officers were injured in arresting scores of Bedouin protesters, who view Israel today as having set itself a goal of forcibly robbing them of their land.

In an interview I conducted for Al-Monitor on Nov. 26, Atia al-Asam, chairman of the Regional Council of Unrecognized Bedouin Villages, explained that the neglect and discrimination of the Bedouin population are preventing the Bedouins from accepting the principle of regulation put forward by the Prawer Bill’s authors and planners. He maintains that the Bedouins have been methodically shunted to the sidelines of Israel, with no distinction made between their recognized and unrecognized localities.

But the rift between Israeli society and the Bedouins is not only the result of neglect and discrimination. Most of the Bedouin population in the Negev does not believe that Israel is truly seeking an appropriate settlement solution because of the daily war of attrition that has been taking place for years in their villages with members of the Green Patrol, Border Police and Israel Police, who arrive to demolish illegal homes. Thus, whole Bedouin clans, whose fathers served in the Israel Defense Forces (IDF) in patrol units and were skilled military trackers, view the Israeli establishment as ungrateful for their service.

Those sent to demolish the illegal homes the Bedouins have built — because Israel for years has put off finding a proper solution, from their perspective — wore official uniforms. The demolitions are called “operations,” during which police and border police suddenly arrive on the scene to carry out their work and clash with local residents, who witness their homes being demolished before their very eyes. Bedouin children and youngsters watch from the sidelines, perceiving the enforcers of law, representatives of the Israeli establishment, as the enemy. They will not be enlisting in the IDF as their fathers or older brothers had. The friendship that had existed since the establishment of the state has turned into hostility. The rift has become a regrettable fact.

On the Israeli side, the dominant terminology is military, concerning the struggle over land. It was in this spirit that Foreign Minister Avigdor Liberman posted the following on his Facebook page, on Nov. 30: “We are not dealing with a social problem or housing crisis,” the minister declared, “but a struggle over the land, as it was even back in the 19th century upon the establishment of the first [Jewish] communities. … We are fighting for the national lands of the Jewish people, and there are those who are working intently to rob us of them and take control of them by force.”

Liberman is not alone. Israeli discourse on Bedouin lands in recent years has revolved around “occupation,” “overtaking” and “losing the Negev.” Without official settlement solutions, however, and given the natural growth of the Bedouin population, the Bedouins have been left with no other choice than to build illegally and significantly expand unrecognized settlements.

The unexplained deferral in finding settlement solutions for the Bedouins, who were left outside the seven municipalities built in the 1970s, has created a deep rift with that population as a whole. During the demonstrations last week, protesters shouted, “Settler state,” referring to the forgiving attitude shown by the Israeli establishment toward the construction of Jewish settlements [in the West Bank and East Jerusalem] and consideration for natural population growth in them, contrasted sharply with its dismissiveness toward the natural growth of the Bedouin population in the southern region of the Negev over the past 20 years.

Thus, social anxiety, a desire to preserve culture and tradition and differences of opinion over compensation and ownership of land have slowly grown into a battle over land — a battle between Bedouin land and Jewish land. The tension and bad blood are turning any solution, no matter how fair, into yet another maneuver in the war of attrition being waged over territory. Given this sentiment, there is no chance that the Prawer Bill will pass without incident. Suspicion and hostility have overshadowed all else.

Therefore, before blood is spilled and the rift between the Bedouins and Israeli society becomes a terrible tragedy, everything must be put on hold and reconsidered together with the representatives of the Bedouins. There is no reason to insist on promoting the bill no matter what.

The Prawer Plan is not a bad plan. It may be lacking, because it does not take into account that the Bedouins living in unrecognized villages do not believe the government is proposing a plan based on a sincere desire to ease their anguish and improve their future. At the foundation of the plan's outline, however, some of the unrecognized villages were supposed to become permanent, recognized settlements that will receive development and infrastructure resources.

To get to the point of voluntary, unforced settlement, the parties need to rebuild trust in each other. This can be done in several ways: freeze promotion of the bill in its second or third reading; stop talking in terms of war over the land and start speaking in terms of peace; include Bedouin representatives — the heads of the councils and villages — in the talks on the details of the law; rezone the land to allow construction of permanent localities; and build trust between the Bedouin population and the Israeli establishment and society as a whole.

The Bedouins' representatives, without exception, agree that solutions must be found to regulate Bedouin settlement of the Negev and admit that the current situation needs to be changed and addressed. Much work needs to be done, however, to reach understandings and agreements even before maps are drawn and compensation payments are calculated.