The Anguish of Israel's Bedouin

Israel's Bedouin tribes are calling upon the government to stop their forced relocation under the Prawer law, and use dialogue and compromise to avoid more violence. 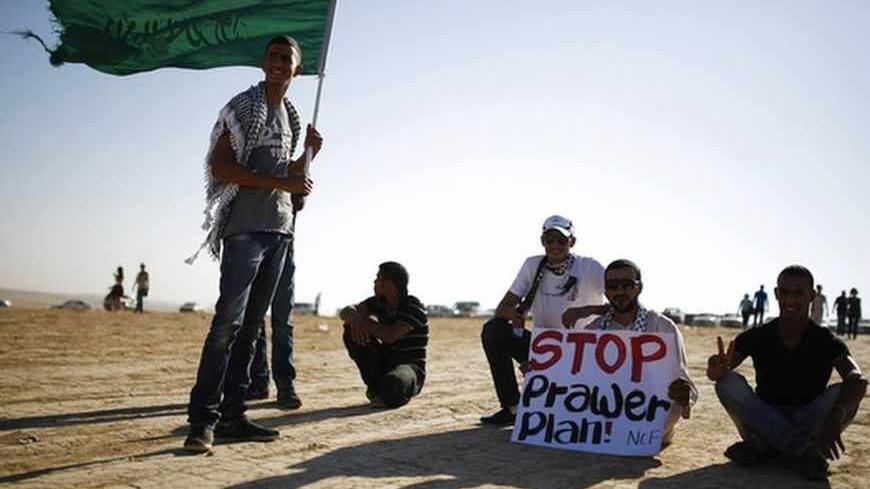 A protester holds a placard as another holds an Islamic movement flag during a demonstration to show their solidarity with Bedouin citizens, near the Bedouin town of Rahat in southern Israel, Aug. 1, 2013. - REUTERS/Amir Cohen

If anyone thought that the Prawer Bill to regulate Bedouin settlement in the south of Israel would pass quietly, the demonstrations and conflicts of the past few days prove that he was mistaken. The implementation of the law and attempts to forcibly evict the Israeli Bedouin from their unrecognized settlements in the Negev and move them to planned new settlements will only deepen the rift between them and the state of Israel and ultimately lead to bloodshed.

It is very reasonable for the state to want to pass a law regulating the Bedouin settlements, either through financial compensation or by providing alternative plots of land to anyone forced to abandon their own. The far-reaching land grab by the Bedouin clans of the south has created a situation that requires intervention. On the other hand, almost any time that the state has tried to find an equitable legal solution that also meets the tribal needs of the tribal people, the Bedouin have pulled out the claim that “This land belongs to me and my ancestors,” effectively ending the discussion.

Members of the “Green Patrol,” which enforces the Ministry of Environmental Protection’s decisions, have been engaged in futile efforts to curb the tribes’ seizure of additional territories resulting from the natural growth of the community or the shifting migration patterns of their flocks. Efforts to demolish illegal structures have quickly deteriorated into full-fledged battles pitting the residents against the Israeli Land Authority and the police. A feeling of animosity toward the state has emerged among the Bedouin over time, as they perceive it as hostile to them and their lifestyle. It is hard to believe that in this climate, it will be possible to implement the Prawer Bill through dialogue and cooperation. After all, the Bedouin claim that the law would result in 36 unrecognized villages being uprooted, dispossessing villagers of 800,000 dunums (300 square miles), and some 30% of their population would be concentrated in just 1% of the land on which it is now spread out.

Former Knesset member Talab el-Sana, from the village of Lakiya, described what will happen after the bill is finally passed into law: “If the government continues to promote this plan, we will declare a civil revolt. If the plan does not show us respect, we are not required to respect its implementation.”

“Civil revolt” is a term that the Bedouin of the south have started using with increasing frequency ever since their structures have begun to be demolished. Every such demolition has become a full-fledged military operation, involving the police, border patrol, inspectors, bulldozers and guard dogs. While it is true that the number of forces present has been increased due to the violent resistance that erupted during similar incidents in the past, the enormous force used against the Bedouin inevitably instills in them a sense of being enemies of the state.

This is what happened during one such raid by law enforcement on an unrecognized Bedouin settlement: Bulldozers secured by a large police force appeared at the scene without any prior warning and started to demolish buildings, fences and tents. A crowd of angry men started throwing rocks, and women and children started shrieking. Once the bulldozers had finished their work, a tractor arrived to destroy dunum after dunum of vegetable patches and wheat fields planted by the locals. Their pain and anger was palpable. Men and women wallowed in the sand, clutching at clods of earth and the ruins of buildings, which quickly became projectiles of stone, wood and asbestos. What pained them the most was the fate of their agricultural lands. While the inspectors claimed that the Bedouin have no title to the land, the Bedouin retorted that they have owned and worked this land for generations.

Sami Amrana, a resident of Segev Shalom, has commented to Al-Monitor on the eviction of the Bedouin, comparing them to Jewish settlers of Gush Katif in the Gaza Strip. He said, ''I was touched to see the sympathy demonstrated by the soldiers called to move out the settlers. They hugged them, shed tears with them, made sure they received psychological support, brought in social workers — everything. … But then I ask myself: ‘Why is it that the settler is given a hug, whereas with me, you speak only the language of force?’ We are beaten with brute force; we are treated roughly, while the Jews are embraced.''

Could it have been done any differently? A campaign to resettle the Bedouin of the south began in the 1970s and lasted almost 20 years. Hundreds of thousands of people now live in the seven settlements established with the agreement and acceptance of the Bedouin community: Rahat (the largest Bedouin city), Lakiya, Kuseife, Hura, Tel Sheva, Segev Shalom and Ar’ara. There was opposition from the Bedouin back then, too, as they were reluctant to abandon their traditional tents and move to planned settlements, but this was tempered through dialogue. Today, these settlements often have stone homes with a tent pitched next to them, and family life alternates between the two.

Once again it has become necessary to introduce some order into the Bedouin’s expansion into lands outside the boundaries of those settlements. The atmosphere is more charged and the mood is more hostile than it was three or four decades ago. What steps can be taken to ensure that the implementation of the Prawer plan does not turn into a civil revolt?

The Bedouin have an intelligent answer to this conundrum. They say that if the state wants to eliminate the tension and hostility, it is incumbent upon the government to reopen negotiations. They also recognize that it is necessary to give some order to the chaotic expansion of settlements in the Negev and Arava regions, and they are quite open about that. They demand that the law, spearheaded by former Knesset member Benny Begin, be withdrawn, and that all obstacles and risks that could lead to bloodshed in the area be eliminated.

It is quite possible that the country’s legislators will not have to make any major changes to the Prawer plan. All that they will really have to do is to give the Bedouin a sense that these steps are being taken in conjunction with them and out of respect for the community and its lifestyle. It is true that in 2013, it is hard to find some alternative to the Bedouin’s unique lifestyle, but ignoring the necessity of reaching an understanding and agreement with them, as hard as that may be, could end in bloodshed.