The residents of unrecognized Negev villages have for years suffered discrimination and neglect by the Israeli government, which is now threatening them with mass forced evictions and relocation under the Prawer Plan. 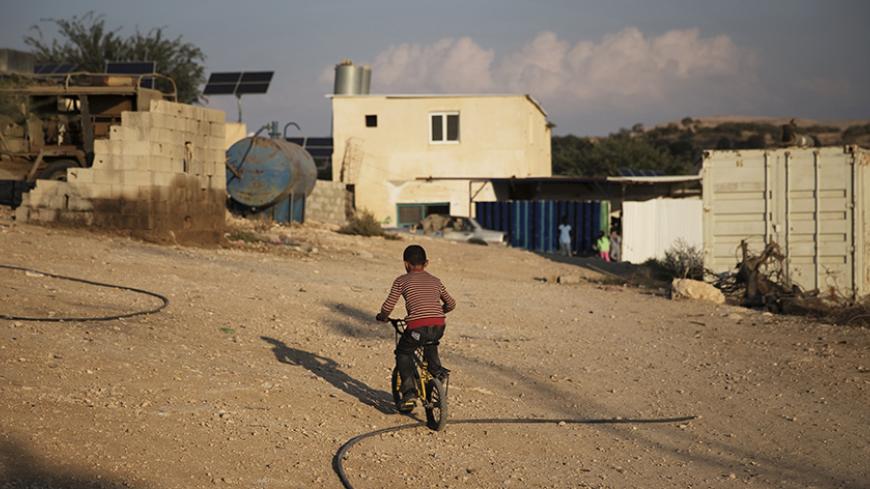 RAMALLAH, West Bank — The residents of Umm al-Hiran in the Negev are on standby, awaiting Israeli bulldozers to arrive someday and destroy their homes as a prelude to establishing a Jewish community on the ruins. Around 70 Bedouin families, some 1,000 people, face forced evictions after a May 5 ruling by the Israeli Supreme Court upholding a 2002 government decision to destroy their village and build a Jewish town called Hiran.

Lawyers from Adalah: The Legal Center for Arab Minority Rights in Israel had argued before the court that the residents of Umm al-Hiran and their ancestors have been living in the village since 1956 on the orders of the Israeli military governor after they were displaced from their original home, Khirbet Zbala. They did not seize the land on which they live. Moreover, their displacement and the demolition of their homes would be unfair and unjust treatment, because they had been established decades prior at the will of the state but would now be demolished based on claims that they had not been permitted.

The Supreme Court ruled, however, that the state rightfully owns the land of Umm al-Hiran, noting that the village residents had not purchased it but rather resided there after the state allowed them to. The state, the court said, is now legally canceling its decision to permit them to reside at Umm al-Hiran. In short, the residents have no legal rights to the land, and it is the state's right to establish Hiran on that land.

The targeting of Umm al-Hiran is part of a series of projects in the Negev in line with the 2011 Prawer Plan, conceived by former Minister of Planning Ehud Prawer and legislated in 2103 as the Law for Regularizing Bedouin Habitation in the Negev. It proposes that the populations of 22 unrecognized Bedouin villages be relocated to residential complexes to be built for them. Unrecognized villages are those not acknowledged as official settlements by the Israeli government. They are therefore denied municipal services and infrastructure, including electricity, phone lines, a sewer system, roads and health clinics. Schools are also scarce.

The issue of the unrecognized villages emerged in 1948 after Israel declared itself a state and began organizing landownership. It consolidated and confiscated land by issuing such legislation as the 1951 State Property Law, outlining state-owned land and allowing Israel to take control of Palestinian-owned properties, and the 1953 Land Acquisition Law, legally allowing the state to take control of lands confiscated from absentee owners. The state attempted to consolidate Bedouin populations in the Negev into government-planned areas, including in Beersheba, Ar’ara and Rahat. Those Bedouin communities choosing not to relocate, instead remaining where they had been before Israel's creation, and those communities displaced by Israeli actions, are unrecognized.

“The Israeli authorities are using every means to force the Negev residents to bow before these plans aimed at destroying the villages and taking control of them with the help of the judiciary in order to establish 21 Jewish settlements,” Attia al-Asam, head of the Regional Council of the Unrecognized Villages, told Al-Monitor. “The residents of Negev’s recognized villages, such as Rahat, have to deal with racial discrimination when it comes to the allocation of budgets, as these villages are granted low budgets compared to Israeli [Jewish] towns. Meanwhile, the 46 unrecognized villages — which are home to more than 90,000 Palestinians — are denied basic services such as electricity and water.”

The unrecognized villages formed the Regional Council in 1997 to defend their rights. “The council was formed after each of the 46 villages established a local committee. The heads of these committees elect the president of the Regional Council for a period of five years. But Israel refused to recognize and deal with us," Asam explained. “We have two main demands. The first is to recognize the villages, and the second is to grant us the services that should be provided by the state to all citizens, such as education, health care and infrastructure.”

In late 2013, numerous protests were staged against the Prawer Plan. Arab Knesset member Haneen Zoabi recently told Al-Monitor, “If Israel carries on with this plan, it would bring public rage back to the street.” She further stated, “Should the Israeli bulldozers insist on destroying these villages, we will confront them and protect the villages with our bodies. Israel is well aware that we will never give up. The owners of this land will be the first to resist this plan, and they have made it clear that they refuse to give up and leave. Public rage will be the trigger of the struggle to preserve the land.”

Taleb Abu Ara, a Knesset member from the Joint List and the Negev region, told Al-Monitor, “Israel’s quest to conquer the land and swallow the Arab villages should be faced with an intense political and popular mobilization based on the struggle against this racist policy. Israel is practicing the ugliest form of dictatorship by denying dozens of villages their basic rights and seeking to forcibly evict them, which would eventually lead to an explosion of the situation.”

In explaining the Israelis' actions, Ara remarked, “Israel sees Arabs as a demographic and security threat. This is why it deals with them aggressively and does not treat them as citizens.”

Adala has represented Umm al-Hiran in Israeli courts for 13 years during various trials over attempts to destroy the village and expel its residents. On May 15, it launched a media and popular campaign under the banner “Umm al-Hiran will not fall” to raise awareness of the issue and to mobilize public support.

Majed Kayyal, Adalah’s official spokesperson, told Al-Monitor that Palestinians constitute 30% of Negev residents, the rest being Jewish. The Palestinians currently live on 3% of Negev territory, and the Israeli plan aims to resettle them on less than 1% of this area. According to Asam, from the Regional Council, more than 220,000 people reside in Negev.

On the Supreme Court's ruling, Kayyal charged, “The Israeli judiciary cannot be fair with the Palestinians on land-related issues, as the land is considered a red line and a matter of life or death for Israel. Thus, the judiciary always stands by the Israeli authorities and denies Arabs their rights.”

Thabet Abu Rass, a geography professor at Ben-Gurion University of the Negev, in Beersheba, confirmed to Al-Monitor that the Israeli government had indeed given the order to settle Umm al-Hiran with residents displaced in 1948 from the village of Khirbet Zbala to a nearby area. Abu Rass also stated, “[Israel] is executing the Prawer Plan on the ground to limit the Arab [presence] to the smallest possible piece of land and to encourage settlements and Jewish investments in the region.”

Abu Rass also observed that Israel has been applying the same concept in Area C of the West Bank, land under its civil and military control, constituting 60% of that territory. Israel has been demolishing Palestinian houses and camps in Area C on the grounds that they were built without permits. It also displaces Palestinians by claiming that they are conducting military training, which puts pressure on them to leave their land.

On March 24, Amnesty International issued a report, “Israel: flawed consultations place Bedouins at risk of forced eviction,” evaluating the current situation in the Negev. It states, “Consultations held on plans to evict some 30,000 Palestinian Bedouin citizens of Israel in the Negev/Naqab region have been deeply flawed and consequently not met international standards … If this is not rectified, any relocation that follows will amount to a forced eviction.” The organization claims that the government has failed to provide accurate, complete and timely information to the people who would be affected by the evacuation process, including details of their planned relocation. These people have therefore not been able to take part in the consultations or decision-making.

The group called on Israel to “give formal recognition to all the excluded villages (so-called 'unrecognized villages'), halt demolitions in them and provide adequate levels of essential services to them.” In the meantime, Palestinians of the Negev are preparing to confront whatever challenges come their way should they decide to stay on their land.