After 107 demolitions, the residents of al-Araqib are gaining international attention through a social media campaign. 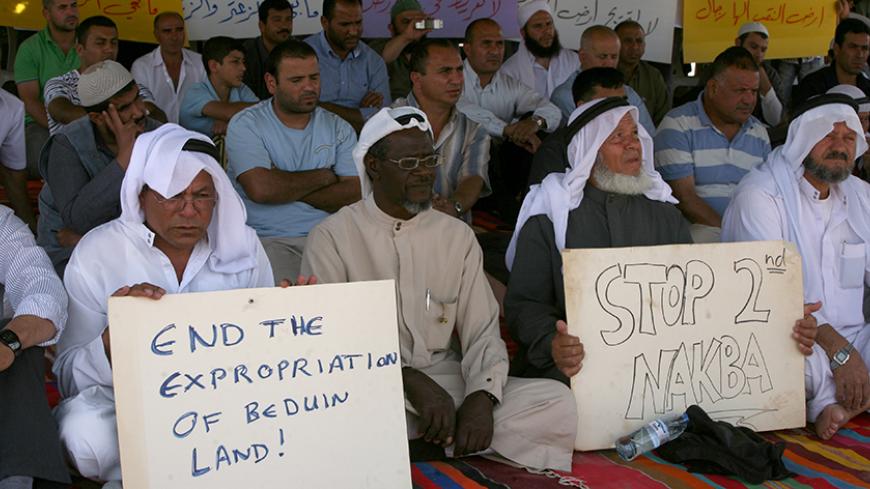 Bedouin attend Friday prayer under a tent in the al-Araqib village, located between Beersheba and Rahat in the Israeli Negev Desert, May 14, 2010. - HAZEM BADER/AFP/Getty Images

AL-ARAQIB, Israel — Every Sunday at 3 p.m., several dozen residents and supporters of al-Araqib gather alongside a highway to protest the government’s repeated demolition of the dusty Bedouin settlement in Israel’s southern Negev.

It’s one of al-Araqib’s many unfortunate routines: Residents say they own the land and refuse Israel’s orders to leave; legal proceedings and fines ensue; authorities demolish tents and homes; people rebuild, and intimidation and protests follow — and each time al-Araqib’s status becomes ever more precarious.

When authorities first demolished al-Araqib in July 2010, the Bedouin village became a symbol for the Israeli government’s push to relocate around 35 Bedouin communities it doesn’t recognize and for the Jewish National Fund (JNF) to reforest the land in their place. In the interim years, a series of legal cases ensued, even reaching the Supreme Court, as the Arab residents have argued they are the rightful owners of al-Araqib, contrary to Israel’s claims that it legally appropriated the land. By the 100th demolition this June, residents and activists struggled to keep their cause in the international arena, as the same sequence seemingly occurred again and again amid deepening political indifference in Israel.

And now as further demolitions — perhaps even the last — continue to loom, residents and activists are relying on a mix of old and new tactics targeting local and international solidarity in another bid to fight the malaise.

For al-Turi, the most important tool he has is to stay put: Remaining, after all, has been the people’s most effective power, he said.

Turi is one of about 80 people still living in al-Araqib, working in nearby cities and towns and returning at night to sleep in temporary tents and cars. Many other families have moved elsewhere, like to nearby Rahat, which has electricity, sewage, water, roads, stable structures, and education, health and other facilities.

The Israeli government insists it is in the community’s best interest to relocate to more safe and stable housing like in Rahat. Turi countered that the government should instead recognize al-Araqib and allow residents to rightfully develop their own land. Residents have also criticized the government for not providing enough housing for the relocated communities, despite claims otherwise.

In other ways, al-Araqib is taking its fight to new campaigns. The recently launched Four Villages Campaign is working to keep the spotlight on several unrecognized villages — both in Israel’s Negev and in the occupied Palestinian territories. Drawing connections to the Standing Rock protests in North Dakota and the fight for indigenous rights, Four Villages is focusing its efforts on the Bedouin villages of Umm al-Hiran and al-Araqib in the Negev and the villages of Susiya and Umm al-Kheir in Area C of the occupied West Bank.

It is a unique partnership that, despite important differences in the Negev and West Bank experiences, people agreed to because they decided in these times of indifference their voices are likely loudest when together.

“We felt that each of these communities was deserving of an international campaign, but we didn't think we had the bandwidth to do four sites simultaneously,” said Rabbi Arik Ascherman, the founder of the new nongovernmental organization Haqel, or United in Defense of Human Rights, which focuses on Palestinian land confiscations in the occupied West Bank and Negev.

“There are significant difficulties between the Negev and the occupied territories,” Ascherman said, noting in particular basic jurisdictional differences, as West Bank Palestinians aren’t Israeli citizens, while Bedouin in the Negev are. “But I increasingly see similarities in the [Israeli] techniques, which is basically using planning and zoning for land control and taking over land owned by Palestinians, whether they be Israeli citizens or not.”

Four Villages is also initiating a letter-writing campaign to the JNF, asking it not to reforest over the demolished al-Araqib as currently planned. A similar petition in 2011 was successful, Ascherman said, when as a result the JNF agreed that no further steps would be taken until after the land dispute was settled in court. Recently, however, they reversed course and started preparing land for planting — perhaps even this month, according to Ascherman.

The JNF has repeatedly denied involvement in the decision-making process of what Israeli authorities demolish and stressed the widespread benefit of their environmental work. But activists counter that the JNF does in practice have a significant say within the Israel Land Council and argue that some forestation projects have clearly contentious political implications.

“To say that they [the JNF] are just a small partner is not the right answer,” said Haya Noach, the director of the Negev Coexistence Forum. “You [the JNF] have a responsibility, and ignoring people’s rights has a toll.”

Al-Araqib residents are also involved in a series of court cases, from contesting fines the Israeli government claims they owe to cover the demolitions to challenging the legality of the government’s initial appropriation of the land.

“The plaintiffs have strong and new evidence to the fact that the 1953 confiscation was illegal and a pretense for stealing Bedouin land,” attorney Carmel Pomerantz, one of several lawyers representing the Bedouin complainants, told Al-Monitor. “We are hopeful that the Bedouin get a fair trial.”

Turi said he was grateful for the international attention and solidarity, which, for places like Susiya, has been critical in prolonging the community from being completely pushed out. But he also described it as “symbolic” — that after so many years international pressure could only be applied if people remained on the ground.

Al-Araqib’s 107th and most recent demolition was Dec. 22, according to Turi.