After an Israeli police officer was killed when a villager ran over him with his car, Israeli Bedouin claim that policemen are carrying out demolitions like military operations. 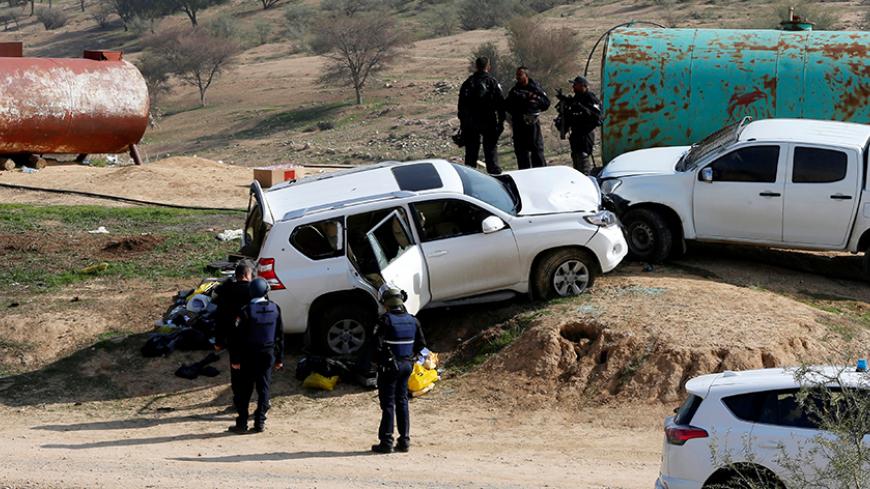 A car (L) that Israeli police say was used by an Arab Israeli to ram into a group of policemen is seen at the scene of the incident in Umm al-Hiran, a Bedouin village in Israel's southern Negev Desert, Jan. 18, 2017. - REUTERS/Ammar Awad

The legal-public struggle to evacuate the residents of the Bedouin locality of Umm al-Hiran started long before the decision to evacuate the illegal Amona outpost. However, the distressing results of the Amona evacuation cast its shadow over Umm al-Hiran as well. Despite all the appeals against the evacuation of Umm al-Hiran, the High Court of Justice passed a resolution in December that mandated evacuation by force. Nevertheless, the way that police and border guard forces raided the settlement this week in order to carry out the mission caused agitation throughout the entire Arab sector.

In the course of the Amona crisis and the attempts of the Israeli government to arrange an alternate outpost for the Amona residents, Prime Minister Benjamin Netanyahu turned to Public Security Minister Gilad Erdan and instructed him on Dec. 17 to immediately enforce laws against illegal construction in the Arab sector.

True, the police have no responsibility over the legal process of issuing and carrying out demolition orders of illegal structures. This power is held by the National Unit for Enforcing Planning and Construction Laws in the Planning Administration, which is subordinate to the Finance Ministry. Police forces are only supposed to secure the unit’s inspectors. But in actual fact, ever since the onset of the demolition campaign mandated by Netanyahu, large police forces are sent to carry out demolition orders in the Arab sector. This is causing a crisis in Arab society, which views these acts as attacks directed against it by the Israeli establishment. This was the case last week in the course of the demolition operation in Qalansuwa on Jan. 10, and this week in Umm al-Hiran.

“Of course this is connected to Amona,” said Atiya al-Asam, chairman of the Regional Council of Unrecognized Bedouin Villages of the Negev. “The wave of demolitions increased in the Bedouin sector after the prime minister incited the public when he talked about ‘parity’ of demolitions. In fact, the residents of Umm al-Hiran are being evacuated in order to establish a Jewish locality instead of the Bedouin one. The Bedouin residents are being cast aside to a bitter fate. By contrast, I see that the Amona residents are being taken care of: Israel is building for them, arranging for them and giving a million shekels to each family. So where is equality?”

Asam said that if the prime minister does not halt his incitement campaign against the Israeli-Arab population, the situation will deteriorate to a terrible and dangerous level that no one wants.

According to the police, in the course of the evacuation, Hiran resident Yacoub Abu al-Kiyan carried out a terror ramming attack, killing a policeman, Advanced Staff Sgt. Maj. Erez Levi. Police publicized a video clip taken from a security helicopter to strengthen their claim. The clip shows Yacoub Abu al-Kiyan’s vehicle racing toward a group of policemen.

“I was there and I saw everything,” Salim Abu al-Kiyan told Al-Monitor. Salim is a relative of Yacoub Abu al-Kiyan. “Yacoub called me five minutes beforehand and told me, ‘I don’t want violence, I’m running home to take my money, the suitcase and computer, and leave.’ That is also what he had in his car. He started driving, was shot before he hit the policemen and his car started to roll down toward the wadi. His head fell on the steering wheel, the horn stated to honk, and that was when the policeman was hit and killed.”

According to Salim Abu al-Kiyan, police added insult to injury when, after the violent evacuation, they claimed that a vehicular terror attack had taken place and that the rammer was a member of the Islamic State (IS). “Yacoub was a mathematics teacher, held in high esteem by his students in the Hura [village] school,” he said. “His brother is the principal of the school and all his other brothers are educators who believe that their role is to impart a good education to the younger Bedouin generation. We are talking about a model family; don’t let anyone tell you that he was connected to IS. That’s baloney.”

Other residents who were present on the ground during the evacuation also spoke to Al-Monitor. They said it seemed that the policemen acted as if they had received orders to conduct the demolition like a military operation. Therefore, any movement on the site looked to them like an attack. “It is certainly possible that the policemen were tense and stressed because they had been prepared for a battle, and viewed Yacoub’s innocent drive as a terror incident,” Asam said. “Prime Minister Netanyahu got everyone into a tizzy and continued to incite against all of us. And this is the result.”

Salim Abu al-Kiyan added that “such large police and border guard forces entered [the village], you would think we are enemies. As if [they] came to take action against terrorists. We were a group, standing next to the locality, and they ran toward us; they formed a circle and surrounded us. Another group of theirs went past us and created another circle closing us in, while their weapons were directed at our bodies. Their officers should have come and spoken to us before the demolition, instead of having policemen entering like maniacs. Then things would have looked very different.”

Erdan and Agriculture Minister Uri Ariel reject the claim that no efforts had been made to come to an agreement with the village’s residents. Ariel said that a long dialogue has been conducted with the Kiyan family over 13 years. “We are after all the verdicts, period. … Negotiations with them came to an end after they submitted illogical requests. Plots of land are waiting for them in Hura. They were given the option of dismantling the site voluntarily,” Ariel said.

In contrast, Asam said, “People wanted to reach an agreement but the Authority [of Bedouin Settlement in the Negev] wanted to evacuate them to a neighborhood in Hura, a neighborhood that was not ready for them. We are talking about residents who were evacuated once already from their lands in the 1950s, and now again, in order to establish a Jewish locality in their stead. They would be thrown into Hura, into a neighborhood that has not been constructed yet. This is not equality, this is catastrophe!”