Why Israel wants these bedouins to pay for their village's demolition

After demolishing the unrecognized Bedouin village of al-Araqib in the Negev region for the 96th time since 2010, Israel is now seeking for villagers to pay damages in compensation for the recurrent demolition work in a bid to force them out and implement the Prawer Plan. 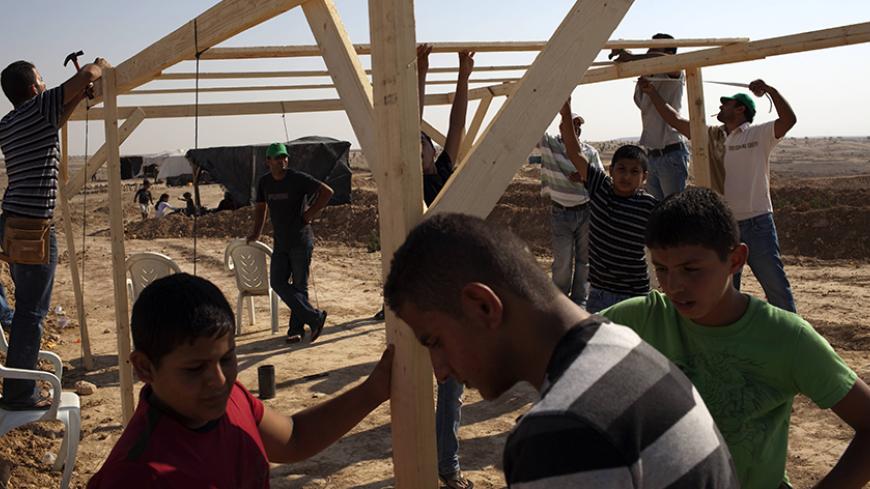 Bedouins build a makeshift house in al-Araqib, a Bedouin village in the Negev Desert that has been razed dozens of times, north of the southern Israeli city of Beersheba, July 21, 2011. - ENAHEM KAHANA/AFP/Getty Images

RAMALLAH, West Bank — The Bedouin al-Araqib village (status unrecognized by Israel) in the Negev (Naqab) region is facing an ongoing demolition campaign that started on the morning of June 27, 2010, when the whole village was flattened to the ground. Since then, demolition work has been recurring each time the inhabitants set up new tents, with Israel claiming lack of permits. The latest incident took place April 5 and was the 96th to date.

Before the demolition campaign started in 2010, Araqib had a population of 400. The number is now down to 22 families (80 people) after some inhabitants were forced to leave the village.

Following the destruction of their houses, the people of Araqib now live in tents or trailers, suffering from a complete lack of health care and educational services, as well as an acute shortage of electricity and water, to a point where they rely on generators and solar panels to generate electricity and pay a high price to transport water via tankers.

In an interview with Al-Monitor, Aziz Touri, a member of the Araqib defense committee, said, “The village is experiencing harsh living conditions amid the absence of the [minimum] standards of living, as Israeli authorities have demolished the residents’ houses and destroyed their crops and livestock. However, the people have survived and are continuing their peaceful fight to claim their rights, gain official recognition for their status and acquire the ownership of the land they live in.”

In parallel with the ongoing demolition campaign, Israeli authorities have instituted legal proceedings against the residents of Araqib before Israeli courts, demanding that they bear the cost of demolition, in a bid to force them to leave the village.

Touri said, “There are now two financial lawsuits filed before the Israeli courts against the residents of Araqib. Israel is requesting the residents pay 2 million shekels [around $529,000] in compensation for the costs paid by Israel to police officers and workers manning the bulldozers in the first eight demolitions of the village. The court is expected to issue its ruling in the upcoming months.”

“The second lawsuit is even more barbaric; it requires the residents to pay a penalty of 50,000 shekels [around $13,000] for each day they spent in the village starting in 2014 until today. This means that the Israeli government is asking for an amount of 40 million shekels [around $10.5 million], allegedly for disrespecting Israeli courts and not abiding by its decision to evacuate the village. The residents are basically accused of illicitly taking over the state’s land and building houses without a permit,” Touri added.

Touri continued, “The demolition policy along with the [Israeli] authorities’ lawsuits against the residents of Araqib aim to undermine our fight and will and pressure us into abandoning our village. However, all these measures won’t break us.”

Khaled Sawalha, the lawyer in charge of defending the village in court, told Al-Monitor, “The main lawsuits the court of Beersheba is examining since 2011 are the government’s lawsuit requesting the residents of Araqib to pay 2 million shekels in compensation for the costs of their houses’ demolition and the lawsuit filed on counts of contempt of court decisions, which is related to the [Israeli] government’s claim for compensation to be paid by the residents of Araqib who refused to leave the village.”

Sawalha also explained, “The only thing the residents of Araqib can do is resist the Israeli decisions and refuse to relinquish their rights or bargain with them. Every Friday, the court in Beersheba holds a hearing to examine the two lawsuits filed against Araqib. In the future, we will bring the case before the Israeli supreme court.”

When asked about his defendants’ confidence in the integrity of Israeli courts and their ability to render a just decision in the case of Araqib, Sawalha responded, “Israeli courts have never been fair and just when it comes to Arab lands. We don’t really expect much from the court, but addressing it is a necessary procedure.”

He added, “Since the inception of Israel, there have been some laws in force that contradict international laws, such as the Absentees’ Property Law through which Israel was able to take over the refugees’ money and property. I am talking about the refugees who had been displaced in 1948.”

The Araqib case is merely another example of the unrecognized villages in the Negev region (75 villages). Israel is planning to relocate the people in order to establish Jewish communities. This is part of the Prawer Plan presented by Ehud Prawer, the former Israeli head of policy planning in the prime minister's office, in 2011.

Arab Knesset member Massoud Ghanayem told Al-Monitor, “Araqib is a miniature model of the battle Israel has been waging against Palestinians in the Negev region for years. It aims to Judaize the region and take control of it in order to implement the Prawer Plan.”

Ghanayem added, “The confrontation in Negev will take time and patience. It’s a struggle that requires popular, legal and political efforts. Indeed, we began by addressing the European Union and the UN human rights organizations with the issue in an attempt to face the Israeli aggression.”

Concerning the Israeli lawsuits requiring the people of Araqib to pay large penalties, Talab Saneh, the member of the High Follow-Up Committee for Arab Citizens of Israel, told Al-Monitor, “It’s another tool the government of Israel is using to put pressure on the citizens to force them out of their land. This is why we are trying to provide the inhabitants of unrecognized villages with the necessary means of survival through aid, donations and help with building houses.”

“The committee is also exploring the possibility of establishing a national fund that relies on donations (individual, social, local and international) to compensate and support the population affected by the demolition campaign in Araqib and other unrecognized villages in a bid to reinforce their resilience in the face of government settlement projects,” said Saneh.

The Araqib case is just another chapter of a bigger story headlined “Palestinian land.” It is a land that Israel has never stopped seizing control of — whether the lands of 1948 or the West Bank — to the point that Palestinians now only own 15% of the total historical surface of Palestine.