War of narratives emerges after demolition of Bedouin home

Chair of the Arab Joint List Ayman Odeh preferred launching a narrative war over the deadly incident in Bedouin Umm al-Hiran village, instead of trying to calm spirits in a responsible manner. 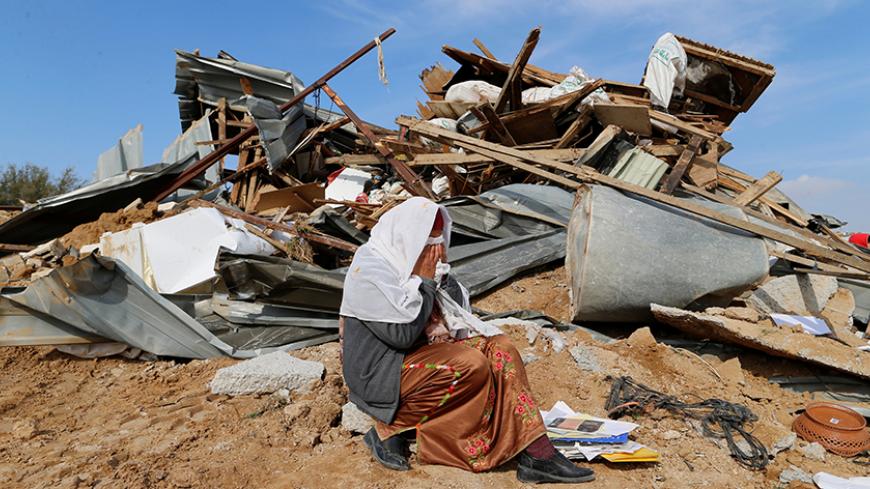 An Arab Israeli woman sits next to ruins from her dwellings that were demolished by Israeli bulldozers in the Bedouin village of Umm Al-Hiran, Israel, Jan. 18, 2017. - REUTERS/Ammar Awad

On Jan. 18, Chairman of the Joint Arab List Ayman Odeh hurried to set the narrative to describe the violent events that occurred earlier that morning in the Bedouin village of Umm al-Hiran. The police operation to evacuate the village left Sgt. Maj. Erez Amadi Levi dead after he was struck by a car driven by one of the residents. The forced evacuation occurred after negotiations between the residents and the authorities blew up the night before. On the table was the willing evacuation of the village by its residents, in accordance with a Supreme Court ruling.

Photos of Knesset member Odeh bleeding from a head wound appeared in all the media and were shared across social networks. In interviews from the Soroka hospital, Odeh claimed he was struck by rubber bullets fired at him by police. The police reject this, saying that he was hurt by a rock thrown by rioters.

Upon leaving the hospital, Odeh continued to disseminate his preferred version of events. He contended that negotiations that night could have prevented the bloodshed, but “Prime Minister Benjamin Netanyahu, who has already marked the Arab population as public enemy No. 1, cruelly decided to destroy an entire village — to shoot and kick men, women and children.” He then called for the formation of an official committee of inquiry, saying, “It is absolutely awful that there are unrecognized villages without water or electricity and without an education system. This is a just struggle. Don’t be confused by the disinformation and lies.”

Odeh is right about one thing: This serious event demands an in-depth investigation, including an investigation into conflicting accounts surrounding the circumstances that led to the shooting of local resident Yacoub Abu al-Kiyan seconds before he ran over the police officer. The police were quick to determine that the attack was intentional. They asserted that Abu al-Kiyan was suspected of having ties to the Islamic State. On the other hand, video of the incident raises the possibility that police officers on the scene shot at the driver, causing the vehicle to careen out of control.

“Don’t be confused by the disinformation and lies,” said Odeh emotionally — and justly so. But the information he is sharing in his many interviews is also worthy of investigation. For instance, did the Joint List encourage a compromise between the residents and the authorities, or — as Public Security Minister Gilad Erdan claims — did it actually take part in inciting the residents, thus provoking the incident? Did Netanyahu himself really order the demolition of the village, as Odeh claimed, as part of his efforts to divert attention from the investigation into his own activities, as well as the public campaign he declared against Israel’s Arab population? The latter is indeed a claim that would be difficult to verify.

In an age in which vast amounts of information flowing from different directions inundates the public debate, it is worth sticking to whatever facts are documented and common knowledge.

The phenomenon of unrecognized villages in the Negev has troubled Israeli governments for the past 15 years. Numerous efforts were made to resolve the issue through committees and legislation, with the goal of reaching a compromise with the residents and offering them appropriate compensation. According to the Association for Civil Rights in Israel, there are 35 unrecognized villages such as Umm al-Hiran, and they are home to some 70,000 Bedouin citizens. In 2007, the Authority of Bedouin Settlement in the Negev was established. Its purpose was to put some order into the main claims of land ownership, to decide on an appropriate procedure to compensate the evacuated residents (from villages constructed without permits), and to establish the infrastructure for the permanent homes to which the evacuees would be relocated.

Even during the various Netanyahu governments, efforts were made to resolve the situation, which is frequently described as a “ticking time bomb.” In 2011, Netanyahu appointed Minister Benny Begin to negotiate with the Bedouin in order to implement the Bill on the Arrangement of Bedouin Settlement in the Negev (in accordance with the Prawer Plan). A budget of 2.1 million shekels ($550,000) was set aside for this purpose. The idea was to create a mechanism for dialogue and to reach an understanding between the parties, after the law was criticized for allowing the government to use all the power at its disposal to impose unilateral decisions on the Bedouin.

Begin held hundreds of meetings with the residents of these unrecognized villages, bringing proven integrity and plenty of good intentions with him. He came away with the impression that they wanted to improve their miserable situation and reach an agreement with the state. What Begin did not know, however, is that while he was engaged in negotiations, politicians from the both the right and the left, led by the Arab members of the Knesset, were inciting the local population. From the very beginning they argued that the law was a colonialist imposition — a law intended to expel people from their homes. They even involved international organizations such as the United Nations in their struggle.

There were turbulent, sometimes violent demonstrations as the law was advanced in the Knesset. Arab Knesset members set the mood in all of them. They seemed to have no interest in reaching a quiet solution. At the same time, politicians from the right, including former Coalition Chairman Yariv Levin, waged their own campaign against the law, claiming that it was an ingratiating compromise and that the scope of compensation was unprecedented.

The first reading of the law passed with a bare majority in June 2013. But just a few months later, it was officially buried. At a melancholy press conference in December 2013, Begin announced that the prime minister accepted his recommendations, and that the legislative process was stopped. He explained that when the Knesset’s Interior Committee first began to debate the proposed bill, Arab and Jewish Knesset members representing both the right and the left worked together to exploit the dire situation of so many Bedouin. He said, “They are trying to bring the mood to a boiling point, just so that they can derive political benefits from it.”

Populism and cynicism won the day. The next development had to wait until January 2016, exactly one year ago. Chief Justice of the Supreme Court Miriam Naor rejected a petition for further discussion by an expanded panel of judges over the evacuation and demolition of Umm al-Hiran so that the permanent settlement of Hiran could be built. This gave the state the green light it needed to evacuate the village.

Odeh didn’t mention any of this when he left the hospital. He said nothing about the state’s ongoing efforts to avoid the forced evacuation of the residents. Nor did he mention the peremptory Supreme Court ruling. Instead, he raised the hypothetical possibility that Netanyahu himself ordered the evacuation. That is the narrative he is trying to etch in the minds of all Israelis.

A committee of inquiry is also necessary to investigate conflicting versions of the deaths of both the policeman and the civilian, and the role Netanyahu allegedly played in stoking the violence. Such a committee is needed also to look into the reliability of the information being disseminated by Odeh and the role of the Joint List in the affair.