Bedouin leaders and Knesset members from the Joint List are demanding an investigation into the violent eviction of Umm al-Hiran and the case of Kiyan Abu al-Kiyan, who Israeli authorities claim intentionally attacked and killed a police officer with his vehicle during the eviction. 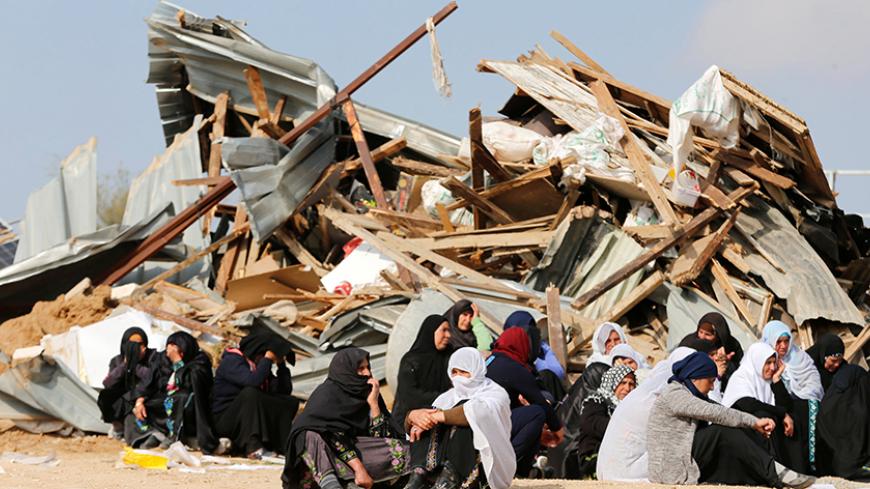 Arab-Israeli women sit next to the ruins of their houses after they were demolished by Israeli bulldozers in the Bedouin village of Umm Al-Hiran, Israel, Jan. 18, 2017. - REUTERS/Ammar Awad

Calls to create a committee of inquiry to investigate police conduct during the Jan. 18 eviction of the Bedouin residents of Umm al-Hiran in the south of Israel began even before the eviction of the settlers from the West Bank illegal outpost Amona on Feb. 1. The gentle handling of the settler evacuation further substantiated the need for such a committee. Bedouin leaders and Knesset members from the Joint List are demanding an investigation into two main aspects of the incident. The first is the violent eviction of the village, which was built without permits, under orders more befitting a military operation. The second is the case of Kiyan Abu al-Kiyan, who the police claim is guilty of a vehicular attack that led to the death of policeman Erez Levy.

“There is no effective, official way to clear his name and remove the stigma of 'terrorist' with which the police have branded him, except through a committee of inquiry,” Kiyan’s widow, Dr. Amal Abu al-Kiyan, told Al-Monitor in her first media interview. “We don’t understand how the police could determine immediately that he acted under the influence of the Islamic State and committed a terrorist attack without first investigating his background that of his family. We are convinced that he was not the kind of person who could even think of doing a thing like that.”

She described her husband as an introverted educator, saying that he was quiet, calm and optimistic. There was nothing about his behavior to indicate that he intended to engage in an act of violence. “He had just bought a new car and new clothes and was planning to build a house. He had his whole life ahead of him,” she said.

Kiyan had returned home to pick up his car, computer, television and any cash he had in the house. According to Kiyan’s cousin Salim, he left home before the police arrived in an attempt to evacuate himself quietly, without violence. While the police say that the headlights of his car were off, citing it as evidence that he planned to run people over, a video published by Al Jazeera shows that the headlights were actually on.

Amal added that her husband came from an educated family with many advanced academic degrees. She herself is a medical doctor and holds another doctorate in science education. She heads a research program at Kaye College and studies interfamilial marriages and genetic diseases in Bedouin society.

Amal has three young daughters, and he also had four more children from a previous marriage. One of them is finishing his medical studies, another is an engineer and the two girls are studying education at Kaye College. “Everyone in our family has at least a BA,” she said. One of Kiyan’s brothers is an inspector for the Ministry of Education, while another brother is a school principal. All of his nephews and nieces are doctors, medical students, pharmacists or nurses.

Another family member told Al-Monitor on condition of anonymity that the family's passion for education and integration into Israeli society “are proof of the falsehoods in the disgraceful accusation that Kiyan was a despicable terrorist, as Police Chief Roni Alsheikh described him in a eulogy he delivered at the funeral of police officer Erez Levy.’’

Amal said, “The students and faculty at the college were shocked. They told me, ‘We know you. We can’t understand how they can accuse you without investigating first.’ We received condolences from across the country, from the Golan to Eilat, and from Jews and Arabs alike. In our tradition, mourning lasts three days, but it has been two weeks since the incident and people continue to come visit us and console us. Everyone supports us, saying that the truth is just starting to come into focus, and that we must do everything we can to make sure that it all comes to light.”

An autopsy found two bullets in Kiyan’s body, indicating that he had been shot before the vehicle crashed and apparently lost control of his car. In a conversation with Al-Monitor, Salim claimed, “No autopsy was conducted on the body of the police officer who was killed, making it impossible to prove eyewitness accounts. … The police were firing indiscriminately."

Ayman Odeh, the chairman of the Joint List in the Knesset, claims that he was hit by two rubber bullets during the eviction: one in the forehead and another in his back. The Institute for Forensic Medicine determined that it would be impossible to verify his claims with any degree of certainty, but rejected the assumption of the police that Odeh was hit by stones thrown by Bedouin protesters. In an interview with Al-Monitor, he said that the government’s refusal to create a committee of inquiry proves that it has something to hide.

“First they accused Yacoub [Kiyan Abu al-Kiyan] of being a member of the Islamic State without even looking into his past or his family background. Minister of Internal Security Gilad Erdan echoed these claims,” said Odeh. “These events have left a stain on Yacoub’s good name. He was buried as a terrorist. They have stigmatized his family. And they have left a blot on all of Bedouin society. As a result of the event, the Bedouin are seen as living in a violent and dangerous society, which must be contained so as to prevent the ideas of the Islamic State from penetrating it. All of this happened without even looking into the accusations. They were all based on the single fact that an Israeli newspaper [Israel Today, which had headlines about terror attacks] was found lying in his home.’’

Odeh added that there will be a mass demonstration in Rabin Square on Feb. 4 to call for the creation of a committee of inquiry. “It is the only way we have to act and exert pressure,” he explained, noting he and his colleagues are also considering an appeal to the Supreme Court. They hope to petition the court to instruct the government to investigate the incident and clear Yacoub’s name after a highly admired educator beloved by all of his students was made out to be a terrorist.”

During her interview, Kiyan’s widow watched footage of the eviction of settlers from Amona as they were aired on TV. The settlers were evicted by unarmed police officers wearing blue hats with an Israeli flag and blue windbreakers. Their clothes gave them the appearance of a less-threatening civilian force, rather than a military one. “I suddenly realized how this country treats the Arabs living here. It was very painful for me,” she said quietly. “I have plenty of Jewish and Arab friends that I met during my long course of study. I feel that they are as close as family to me. I believe that these good friends will help me bring the truth to light.”