Israeli Bedouin are concerned about being stereotyped as terrorists after Israeli officials made "irresponsible" statements following the death of a police officer. 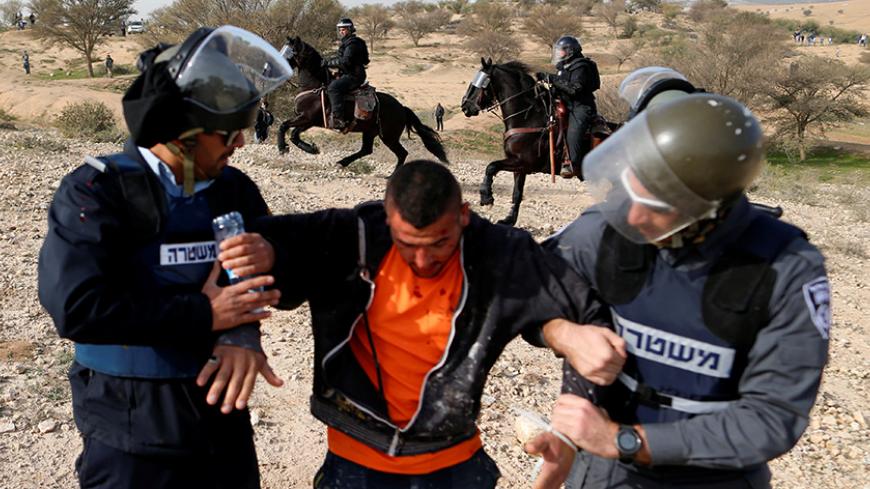 The Jan. 18 deaths of two men during home demolitions in the Bedouin village of Umm al-Hiran continue to send shock waves through Israeli society. During a police operation to evacuate and demolish homes built illegally, Yakub Abu al-Kiyan ran over Erez Levi, a police officer, with his car. Levi died from his injuries and Abu al-Kiyan from being shot by police.

After initial allegations that Abu al-Kiyan had deliberately struck Levi, the conclusion taking shape in the Department of Internal Affairs of the Israel Police is now that the incident was not a terrorist hit-and-run. In addition, Abu al-Kiyan was not a “despicable terrorist,” as Police Commissioner Roni Alsheich described him, or Islamic State (IS) member, as Internal Security Minister Gilad Erdan alleged at the time. Erdan has not apologized, but has changed his tune somewhat, now saying that if an ongoing investigation concludes that there was no attack, it will be necessary to apologize to the family.

In a Facebook post, Erdan placed the onus of responsibility for Abu al-Kiyan's labeling on the Israel Police, writing that he trusted their original statements characterizing him as a terrorist. “That's the way it works and that's the way it should work in every organized framework and between all government organizations and the minister responsible for them,” Erdan wrote to justify himself. He also singled out the Knesset's Arab members, who accused the police from the beginning for the tragic turn of events, saying, “It's too bad that their campaign of hatred and incitement [against the police] has been succeeding so far.”

Erdan omits that immediately after the incident he insisted that Abu al-Kiyan was an IS member based on copies of an old edition of Israel Today found in his home covering a terror attack. His allegation was why Abu al-Kiyan's body was not released for burial until the Supreme Court intervened. By insisting that Abu al-Kiyan was a terrorist, Erdan fed the public a false narrative that IS' ideology had infiltrated the Bedouin, who were now raising homegrown terrorists to confront Israeli law enforcement agents and the general population.

Erdan has no plans to resign. The same goes for Alsheich, although he was quick to decide that Abu al-Kiyan had committed an attack. Only now is he saying that he is waiting for the investigation to release its findings. Neither man has said a word about the damage caused to the Abu al-Kiyan family, which has been forced to deal not only with its grief, but also with the stigma of being the kin of a “despicable terrorist.”

Will the commissioner consider resigning if it is proved that the police deceived the minister and the Israeli public? Will Erdan take his own actions into account? After all, following the rash of forest fires in November, he had been quick to determine that the fires had been deliberate acts of terrorism, but it was later proved that only a small number of the hundreds of fires were arson related.

The Israeli media should also examine its actions. Most news outlets were quick to release a photo of Abu al-Kiyan and brand him “The Hit-and-Run Terrorist.” There was apparently no need for a comprehensive investigation to determine that Abu al-Kiyan did not fit the profile of a terrorist or wait for investigators to clarify the sequence of events leading to his being shot and Levi being struck.

Talal el-Krenawi, mayor of Rahat, another Bedouin town, told Al-Monitor that a new narrative has taken root among Israelis, painting the Bedouin population as violent, as lawbreakers and as influenced by IS. “This has terrifying implications,” Krenawi said. "The Bedouin population has become an instant suspect. What happened in Umm al-Hiran is a good illustration of the negative image with which an entire sector of the population is stigmatized, as if every Bedouin is a potential terrorist.”

Krenawi said that the Bedouin are loyal to the State of Israel and that it is important for them to continue living in peaceful coexistence. “Nevertheless, even the Israeli media has distanced itself from the Bedouin population,” he said. “In many cases, it is aligning itself more and more with the establishment, which regards the Bedouin as a problematic sector of the population.”

Krenawi further remarked that leading local authorities in the south had been invited to police headquarters to see the weapons confiscated in a campaign to rein in crime in the Jewish and Bedouin sectors. “Suddenly, without advance warning, Minister Erdan showed up,” he said. "All the heads of the Bedouin localities decided to walk out immediately, in protest. After all, from his perspective, we could all be considered terrorists or supporters of terrorism.”

Sami Amraneh, a social activist who lives in the Bedouin village of Segev Shalom, told Al-Monitor that the damage caused to the Bedouin population “by the irresponsible remarks of ministers, Knesset members and senior police officers is enormous. The mood among the people I work with has become very tense. Everyone has been influenced negatively by the reports [about the Bedouin]. People everywhere just stare at us.”

Amraneh's father spent 25 years in the Israel Defense Forces as a tracker. Amraneh said that he grew up in a home that took great care to instill a sense of loyalty to and love for the State of Israel, before adding, “But the mood has changed. We feel like an alien body in its midst. I have been feeling more and more like I am part of an oppressed minority that does not receive the rights to which it is entitled. Even when I apply for a job, I always find myself at the bottom of the list, despite my qualifications.”

Amraneh said that all of this is negligible compared to the feeling he has that the Jewish population views the Bedouin as terrorists. As an example, Amraneh noted the way the state treated the residents of the Jewish West Bank settlement of Amona. They were removed from their homes with considerable empathy and sensitivity, a sharp contrast, he pointed out, to the almost military manner in which the Bedouin were evicted.

“We have children, old people and people with special needs whose homes were demolished,” Amraneh said. “No one brought them a psychologist, nor did anyone make sure that they had a roof over their heads to replace their homes after they were torn down. They were thrown into the street like dogs.”

Abu al-Kiyan's widow, Amal Abu Saad, told Al-Monitor that she now feels a certain sense of relief with her husband's reputation being cleared. She lamented, however, “We are still without a roof over our heads. The children have no father. They have been doled out between a sister, a grandmother and neighbors. The older ones are sleeping in the village mosque.”

As for Erdan and Alsheich, she said, “If they had the slightest sense of responsibility, they would think about their mistake, consider its consequences and then decide for themselves that they should resign, without me telling them to do so. They should say, ‘We made a terrible mistake,’ and hand their posts over to more responsible people.”