Police not apologizing over death of Israeli Bedouin

New reports indicate that a police doctor failed to treat an Israeli Bedouin wounded during an evacuation of his village last year, yet no one has approached his widow to apologize. 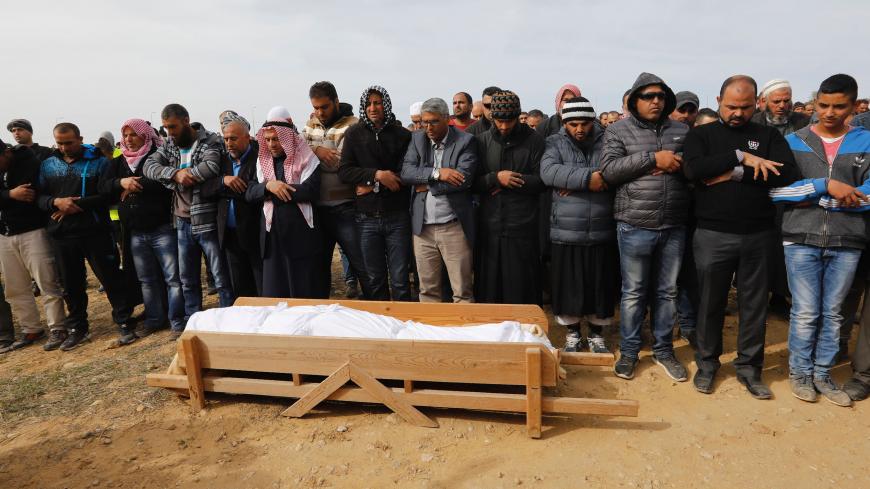 Mourners pray next to the body of Yacoub Abu al-Qiyan, a Bedouin man who was killed the previous week when Israeli police staged a pre-dawn raid on a Bedouin village to demolish several homes, Umm al-Hiran, southern Israel, Jan. 24, 2017.

Israel Police started evacuating the unrecognized Bedouin village Umm al-Hiran on the night of Jan. 18, 2017. The villagers protested against the pending demolitions of their homes. During the evacuation, police officer Erez Levy was killed when Yacoub Abu al-Qiyan hit him with his car. Another police officer shot at the car and injured Abu al-Qiyan. While police were quick to label Abu al-Qiyan as a terrorist and supporter of the Islamic State (IS), his family denied these allegations.

In a law-abiding country, the people who were ultimately responsible for the shooting and killing of Bedouin educator Abu al-Qiyan and who then depicted him as a terrorist would at least face disciplinary action and even criminal charges. The minister of internal security and the superintendent of police would then resign from their positions, effective immediately.

An autopsy of Abu al-Qiyan found that he was shot in his right knee and died of his injuries about half an hour later, without having received any medical attention. Haaretz revealed June 11 that a police doctor who was present at the incident did not provide him with any medical treatment in order to save his life, even though she knew that Abu al-Qiyan was dying. In a state subject to the rule of law, she would have her license to practice medicine revoked for such a flagrant violation of her medical oath.

The Oath of the Hebrew Physician, formulated by professor Lipman Halpern in 1952 and based on the Hippocratic Oath, was adopted by the Israeli Medical Association. It states unequivocally: “You will aid the sick irrespective of whether they are converts or gentiles or citizens, whether they are ignominious or respected.” Abu al-Qiyan was an Israeli citizen — and a respected one at that. He was a teacher who was much admired by his students. As it turns out, the rules of behavior, morality and ethics are different when the patient isn’t Jewish, even if he is a citizen of Israel. The law is not the same for everyone.

The doctor, whose name has not been released, claimed in her defense that she did not know that Abu al-Qiyan was dying. But that makes no sense. The scene of the incident was small, and according to testimonies collected by the Department for the Investigation of Police, not only did the doctor stand just a few meters away from where police officer Levy was killed by Abu al-Qiyan’s car, but it was also obvious that the police fired at the vehicle. Even if she thought in those critical moments that the police had just shot a terrorist, it was her responsibility to provide him with medical attention.

Physicians for Human Rights and the human rights group Adalah (Justice) submitted a complaint against the doctor to the Israeli Medical Association and demanded that the Ministry of Health investigate the matter. “This was a serious medical failure, which ran counter to the very basis of professional ethics,” the complainants wrote.

As of the writing of this article, no one has contacted Abu al-Qiyan’s widow, Amal Abu Sa’ad, to apologize — not for presenting her husband to the Israeli public as a “wicked terrorist,” as the Superintendent of Police called him, and not for allowing him to bleed to death, even though he could have been saved.

A representative of the Shin Bet who was at the scene provided detailed testimony to the Department for the Investigation of Police, in which he completely rejected the possibility that the incident was a terrorist attack. Instead, he called it a failing on the part of the police at the site. Despite his testimony, State Attorney Shai Nitzan decided to close the case against the police officers who fired at Abu al-Qiyan without deciding first whether this was a terrorist attack (or whether Abu al-Qiyan just lost control of his car) and without clearing the reputation of Abu al-Qiyan after it was tarnished by the police.

“We waited for the truth to come out,’’ Sa’ad told Al-Monitor. “From the very beginning, we have been saying how confident we are that he was not the kind of person who could commit a terrorist attack. We’re glad that the truth has finally come out, because the people of Israel must know the truth.”

She also said that she only learned now about the doctor’s despicable behavior. “We knew that there was someone who could have offered medical care on site, and now we have learned that it was a doctor who did nothing,” she said. “At that moment, the doctor forgot that she was a doctor and treated the incident without the slightest professional ethics or morals. She should be held accountable for that.”

Sa’ad is cautious and even forbearing in her comments about the Israel Police, Police Commissioner Roni Alsheikh and the minister of internal security. All she is asking is that they absolve her husband of any guilt. “I can’t say that they should resign,” she said. “However, as the people at the top of the pyramid, it is incumbent upon them to tell the truth. We are a democratic state, and everything comes out in the end.”

She also said that she and her family believe that an official commission of inquiry should be established to investigate the incident in which her husband was killed. “But the state refuses,” she said. “Why? They have the answer to that. Apparently, it’s because they treat us differently.”

Chairman of the Arab Joint List Party Ayman Odeh also called for the establishment of a commission of inquiry to investigate Abu al-Qiyan’s death. In his statement, he wrote, “The name of Yacoub Abu al-Qiyan must be cleared, after [Minister of Public Security Gilad] Erdan and Alsheikh, who are responsible for the tragedy of that reprehensible day, used the incident to play a filthy political game. The tragedy in Umm al-Hiran will be remembered by history as a milestone in the attitude of the police and the state toward Arab society.”

As of now, Erdan and Alsheikh refuse to admit they made a mistake. Alsheikh has not apologized for calling Abu al-Qiyan a “wicked terrorist” or for claiming that he was acting on behalf of IS simply because a search of his home uncovered a copy of Yisrael HaYom — Israel’s most widely distributed newspaper — with a report on attacks by IS. Meanwhile, Erdan continues to question the Shin Bet’s assertion that this was not a terrorist attack. A statement released by his office last month after the case against the officers who shot Abu al-Qiyan was closed stated, “Minister Erdan expressed his regrets that the Shin Bet investigation was halted after just a few hours, before it could collect evidence to support the police’s determination that this was an intentional attempt to run someone over.”

In February 2017, one month after the event, when cracks started to appear in the police account, Erdan declared that if it turns out that this was not a terrorist attack, “It will be necessary to apologize to the Abu al-Qiyan family.” Abu al-Qiyan’s widow is still waiting for an apology.