Israeli Official Report: No Rule of Law In Occupied Territories

The Israeli state comptroller’s report stating that the law isn’t being enforced in the settlements is only an earth-shattering revelation to Israelis and the Israeli media, who have ignored what is going on across the Green Line for the past years. 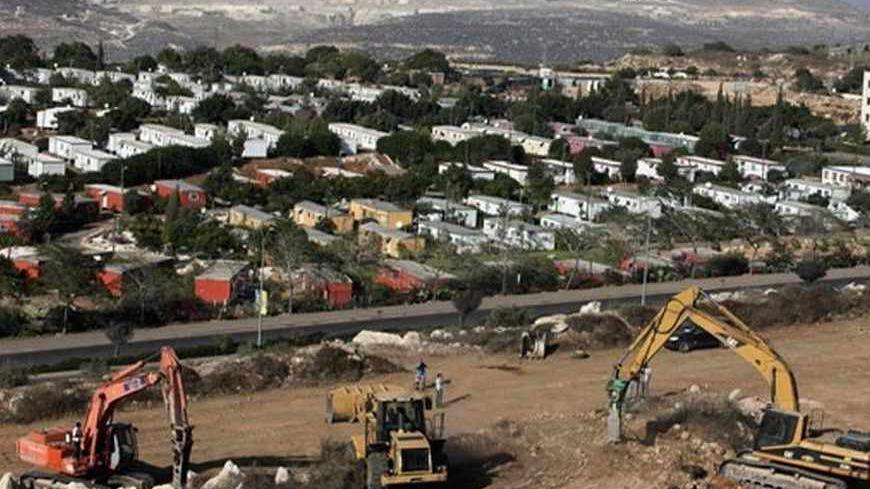 Construction vehicles prepare the ground as building of a housing project resumes in the West Bank Jewish settlement of Ariel, Sept. 27, 2010. - REUTERS/Nir Elias

“A mountain of money lies among the terraces of Judea and Samaria. This involves hundreds of millions of shekels in lease fees for the land that the state (of Israel) simply neglected to collect from settlements in Judea and Samaria established by the Settlement Division from the 1970s until now.” This quote and many others like it appeared this week in a voluminous series of articles and editorials in the Israeli press about the report that State Comptroller Joseph Shapira released on July 17. Commentators and reporters covering military and economic affairs clucked their tongues disparagingly at the “egregious misconduct” that the comptroller uncovered. They used big, bold headlines to draw attention to the biblical phrase that he cited to describe the absence of law and order in the Jewish settlements of the occupied territories: “Every man did that which was right in his own eyes.” (Judges 17:6)

These are the main points that Shapira, a retired judge, wrote in his report:

A careful reading of the report shows that the term “Wild West,” used to describe what has been happening in Judea and Samaria over the past few decades, is hardly an exaggeration. Furthermore, the report contains a partial answer to the question asked repeatedly by the person who was swept into the Knesset on the wave of social protests in 2011, and who went straight to the Finance Ministry — that is, Yair Lapid. “Where’s the money?” he asked. As it turns out, the money is hiding between the lines written by the state comptroller.

Just about anything goes in the "Land of the Settlers." The situation there is familiar and obvious to anyone who has ever taken a short jaunt along the roads of the West Bank, even for just a day. I wrote an article here about the hundreds of illegal outposts that have become facts on the ground, and how detrimental they are to carrying out the idea of a two-state solution.

These settlement outposts are “illegal” in name only. In practice, they receive services and infrastructure such as electricity, water and waste collection from both state and local authorities. No one is bothered by the title “illegal outpost,” and no one brings those people who violated the law to justice. There is a different legal code in force in Judea and Samaria, and it is utterly dissimilar to the law observed in Israel within the Green Line. It isn’t really necessary to burrow through the state comptroller’s reports to find that out. No one has to scrutinize the state’s revenues from the settlements in the West Bank and the attendant collection data to learn that the law is not being enforced there.

It is enough to give just one example — which the Israeli public has known about for years, and which no one bothers to hide. There is a man named Avri Ran, who lives near the settlement of Itamar in Samaria. Considered to be the “Father of the Hilltop Youth,” he established a farm there 17 years ago and named it “Gva’ot Olam.” Ran’s farm is enormous and includes many different branches. It has expanded so much over the years that even some settlers consider his actions as an aggressive and dangerous land grab. That same Avri Ran and his supporters also acted to expand the settlement of Itamar eastward, so that it now extends across thousands of dunums stretching between Nablus and the Jordan Valley.

Has anyone collected rent from Ran for his use of those lands? Did anyone really have to wait for the state comptroller’s report to find out that the thousands of dunums belonging to Itamar are actually held by it illegally? If the very name of these points of settlement includes the term “illegal outpost,” how could anyone expect the state to collect taxes and other moneys from them?

The report states that one of the reasons that the law isn’t enforced is because those groups charged with enforcing the law are afraid of the settlers. What’s new about that? Over the past few years, left-wing and human rights organizations distributed hundreds of video clips that showed soldiers and policemen watching indifferently while settlers damaged Palestinian property. They didn’t even lift a finger to stop the settlers.

It would be wrong to claim that the settlers are the only ones responsible for the situation that emerged in the occupied territories. It really is safe to assume that anyone who lived in a place where the law is little more than a recommendation would behave the same way. It is hard to believe that someone would volunteer to pay taxes if there was no one to enforce it, and there isn’t a man alive who wouldn’t want to expand his home without having to account for it to anyone.

When one of my neighbors in a town in the center of the country built a trellis in his yard, inspectors from the local council would order him to remove it within 48 hours. If an Arab citizen of Israel ever tried to add a room to his home, the bulldozers would show up before he laid the last brick. And then there’s east Jerusalem. The people there have long since given up on obtaining legal building permits to expand their properties, but if they build without a permit, they also will come face to face with the authorities’ bulldozers.

Not to forget, of course, the Israeli Bedouin. The massive and uncompromising destruction of illegal building in their unrecognized villages in the north of Israel and more so in the south has shattered their trust in Israeli authorities. Sami Amrana, resident of Segev Shalom (Shaqib al-Salam in Arabic) whom I interviewed for Al-Monitor sadly compared the attitude of the state to the settler's construction, to the currently controversial construction by the Bedouin:

“But then I ask myself: ‘Why is it that the settler is given a hug, whereas with me, you speak only the language of force?’ We are beaten with brute force. We are treated roughly, while the Jews are embraced … it scars your soul.''

Over the past few years, the Israeli media has failed in its coverage of the occupied territories. Illegal construction has become routine and boring, a veritable “non-story.” Then suddenly, the state comptroller discovered that people are doing whatever they please in Judea and Samaria. If the media hadn’t suppressed the story of what is happening across the Green Line and removed it from the national agenda, journalists would realize that the report isn’t telling them anything new. In fact, it is the real “non-story.”