Israeli Bedouin reject the Prawer Plan, aimed at regularizing their illegally constructed localities in the south of Israel by tearing down homes and relocating them in crowded ''Bedouin towns.'' 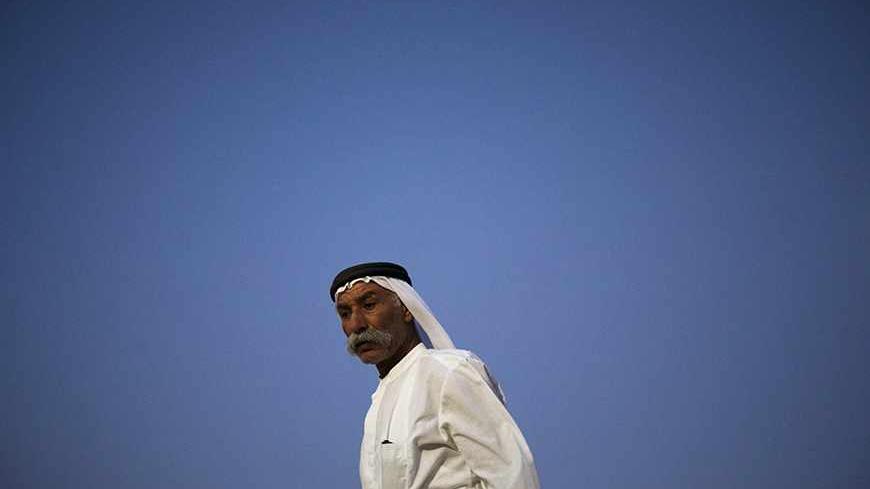 Abu Aziz stands outside his tent in the village of al-Arakib, one of the dozens of ramshackle Bedouin Arab communities in the Negev Desert which are not recognized by Israeli in southern Israel, Aug. 18, 2013. - REUTERS/Ronen Zvulun

Tension is growing between the Israel and the Bedouin population as implementation of the Prawer Plan for the regulation of Bedouin settlement in the southern region of the Negev draws near. The proposed bill, promoted by former Minister Benny Begin already in the previous Knesset, will soon be approved by the legislature and become law. It is based on the plan prepared by a team headed by Ehud Prawer, the former deputy director of the Israeli National Security Council.

Prawer’s team was tasked with implementing the findings of a committee headed by retired Judge Eliezer Goldberg, which examined the state of the Bedouin settlement in the Negev. The Prawer Plan, approved by the government in September 2011, is intended to resolve the land ownership claims by Bedouin living outside recognized localities and to provide a solution to the 35 Bedouin villages scattered throughout the Negev which the Israel refuses to recognize as permanent habitations.

This week the Bedouin in the official and unofficial localities announced a general strike of their public institutions after members of the Knesset’s Interior Affairs Committee, headed by Knesset member Miri Regev, conducted a tour of the Negev, ostensibly without coordinating it with Bedouin representatives.

“The right wing and the Regavim movement (an Israeli NGO [nongovernmental organization] dedicated to monitoring and documenting the illegal activity of Israeli Arabs on government-owned lands) want to kick all the Bedouin out of the Negev region,” says Atia al-Asam, chairman of the Regional Council of Unrecognized Bedouin Villages, in an interview with Al-Monitor. “What’s galling is that the Prawer Plan moves 30 villages, destroys them, and at the same time Regavim plans to settle Jewish residents in their place. There are plans to establish 20 Jewish localities, most of them on the ruins of these villages. We’re asking ‘why?’ The Negev is wide and large, they can live wherever they want. Why on the villages of the Bedouin?”

Al-Monitor: This is a very serious accusation.

Asam: “But it’s a fact. There are plans, it’s no secret. The crisis of confidence between the Bedouin and the Israeli establishment prevents them from believing that Israel’s intentions are good and that the plan is based on true concern about the future and state of the Bedouin, who live today below the poverty line.”

Al-Monitor: Do you accept the principle that the Bedouin settlement in the Negev must be regularized?

Asam: “A large number of these localities are in place from before the state was established and some of them were moved there by the state itself in the 1950s — from the northern and western parts of the Negev to where they are now. In other words, the state doesn’t even recognize localities which it itself moved. They are invisible villages because the authorities at the time preferred not to draw them on a map. Now the state says they are squatters.”

Al-Monitor: And yet the Prawer Plan offers solutions.

Asam: “The Prawer Plan doesn’t talk about settling the Bedouin, only about regularization. The plan doesn’t offer a single new locality to those willing to leave their villages. It doesn’t tell them where they’re going and doesn’t say it will recognize other localities.”

Asam: “We have seven recognized towns. The state wants to settle the evacuated Bedouin in these towns. It doesn’t intend to recognize new localities, only to concentrate the Bedouin in highly overcrowded conditions and to push more people into poverty.”

Al-Monitor: What solution would set your minds at rest?

Asam: “We prepared a master plan together with the NGO Bimkom. Professors from Ben Gurion University in the Negev, like Professor Oren Yiftahel, worked with us and we put together a plan that solves all the problems of the unrecognized villages in accordance with the state’s planning standards. Our proposal is to develop the localities that have received recognition and to turn them into models that will appeal to Bedouin and make them want to live there. The state recognized 10 localities 15 years ago, but unfortunately they are completely similar to the unrecognized localities. Nothing was done there.

“For example, the locality of Bir Hadaj which was accorded recognition 15 years ago. The settlement is not hooked up to the power grid nor to a water supply. On the other hand, a year and a half ago a Jewish community was established illegally next to Bir Hadaj. The state hooked it up to electricity, water, and plans to recognize it and provide it with everything. We’re not opposed, let them recognize, but why does the state discriminate between localities? Why shouldn’t the state develop the Bedouin settlement?

“Had the state developed the recognized localities and turned them into models, people would be asking to live there. But someone living in an unrecognized village who sees that a locality recognized 15 years ago looks exactly like the village where he’s living now, then of course he has no trust in all of the state’s plans for the Bedouin.”

Al-Monitor: Do you share the view that an attempt to forcibly implement the Prawer Plan will result in violence?

Asam: “I’ll tell you what I see now. The state is going to expel 50,000 residents from their homes. Where will they go? The state hasn’t prepared infrastructure, it’s uprooting them from their homes and putting them into other localities. They will refuse to leave and then the government will employ force against women and children and I’m sure there will be a reaction.”

Al-Monitor: And what do you think about the claim that if the government fails to regularize these localities, Israel will lose the Negev to the Bedouin?

Al-Monitor: There are those who compare the Druze minority to the Bedouin minority, with whom the state once had a steadfast friendship but no longer seems to be the case.

Asam: “True, once the Bedouin volunteered for the army and were rewarded by having their homes destroyed. Only last week a guy who has been serving in the army for 25 years came home from his base and found his house destroyed. This negative attitude estranges the Bedouin from the state and when the state doesn’t want the Bedouin to belong, their loyalty is diminished.”

Al-Monitor: The Israeli public sees the blood ties with the Druze as an inseparable part of the state, whereas it fears settlement by the Bedouin. Where did you go wrong?

Asam: “We didn’t go wrong. The Israeli public gets its information from the media and from decision makers and when it hears that the Bedouin have taken control of lands, that they’re criminals, thieves, that they violate the law, and the press writes and the television broadcasts, all this creates a hostile atmosphere. But I want to say that there are many Jews fighting alongside us, in all our protests there are many Israeli human rights groups, and they see that the state’s policy is bad and in the end that it’s bad for the state.”

Al-Monitor: Do you think this is happening because of the strengthening of the right wing in Israel?

Asam: “The right has an ideology that everyone knows, an ideology that doesn’t exactly like the Arab minority in Israel, and we see the laws that the Knesset is adopting. A democracy in which the majority tramples the minority is not a true democracy.”

It should also be noted that the Prawer Plan aims to organize the Bedouin settlement in the Negev while ensuring the preparation of appropriate infrastructure that could house the Bedouin who leave the unrecognized villages. According to studies conducted and presented to members of the committee, by 2004 the Bedouin spread out in the unrecognized villages more than 11,000 dunams. With the fast natural population growth among the Bedouin population, the spread and the illegal seizure of land will only escalate.

In the introduction to the bill presented by former minister Benny Begin in his day, he writes:

“Bedouin citizens are citizens with equal rights and as such have a right to a social and economic framework that would serve them as the basis to realize the opportunities for growth available to Israeli citizens.”

Does the Prawer Plan offer appropriate solutions that would remove the Bedouin society from the cycle of poverty and allow it to enter Israeli society?

All, of course, depends on whether the plan is implemented with the cooperation of the Bedouin. But one mistake has already been made this week: that the Knesset Committee for Internal Affairs explicitly ignored their representatives, and that’s too bad.