The Negev Desert is threatened by huge settlement projects that the Israeli government is planning to implement in order to force the Bedouins into small population clusters. 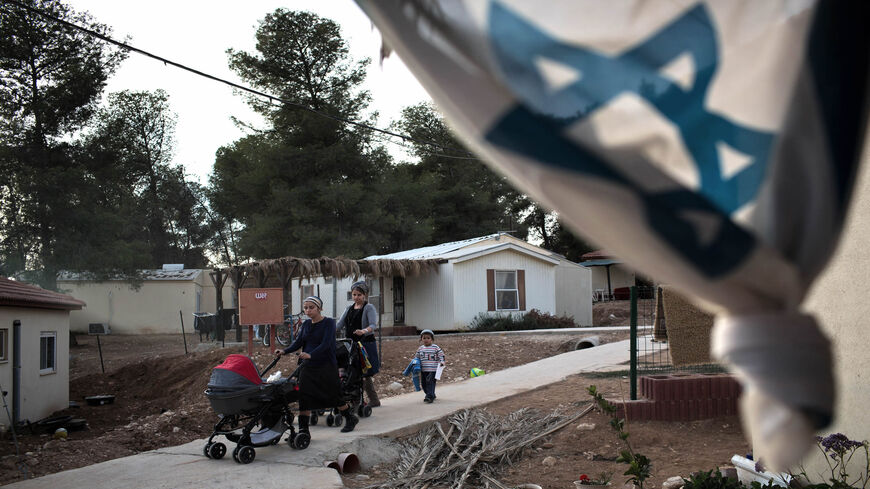 Members of the new Jewish community of Hiram walk with their children in their temporary village in Mahane Yatir located in the northern Negev Desert, Nov. 24, 2013. - Menahem Kahana/AFP via Getty Images

RAMALLAH, West Bank — The Israeli government has recently approved more settlement projects within the Green Line, and in the 1967 occupied territories in the West Bank and the occupied Syrian Golan Heights.

On Dec. 26, the Israeli government approved a settlement plan in the occupied Syrian Golan Heights worth 1 billion Israeli shekels ($323 million). On Dec. 28, Israeli Interior Minister Ayelet Shaked announced the establishment of four settlements in the Negev Desert to bring in 3,000 Jewish families. This is part of a larger plan to establish 10 to 12 settlements in the Negev. The plan also includes implementing “national” infrastructure and industry projects, such as the high-voltage electricity project, railway project and phosphate factories.

Shaked is the spearhead leading settlement projects in the Negev Desert. Along with Israeli Prime Minister Naftali Bennett, they reached an understanding with the Arab Joint List in the Knesset headed by Mansour Abbas on Nov. 3, 2021, regarding the projects in the Negev.

The understanding stipulates that Israel recognizes and develops three Arab villages in the Negev — Rakhma, Abdah and Khashm Zana — which are inhabited by approximately 7,000 Bedouins, and establishes a new city for the Bedouin community. In return, no less than 70% of the Bedouin population scattered in the Negev would sign an agreement to move to that city and villages and evacuate their lands within seven years. In addition, the lands allocated to Bedouins shall never be expanded in the future, as their area will be reduced from 13,000 dunams (3,212 acres) to 3,000 dunams (741 acres), i.e., Israel will confiscate 10,000 dunams (2,471 acres) of the people's lands.

Israel stipulates that if these villages are recognized, they must receive Bedouins from outside to live in them.

Adalah’s general director and researcher in the history of the Negev Desert, Marwan Abu Freih, told Al-Monitor, “The settlement plans in the Negev are sponsored by the Israeli government and Zionist parties such as the Yamina party headed by Bennett and Shaked. In addition, they are supported and encouraged by many settlement associations, most notably Regavim.”

Abu Freih pointed out that Israel plans to establish about 12 settlements in the Negev, raise the number of settlers residing there during the next 10 years to 2 million, move military factories from the north to the south (Negev), establish military training centers and build highways to connect the north to the south in order to facilitate the travel of settlers and motivate them to live there, as well as establish a railway line to connect the new camps and settlements.

The Israeli government’s plans go in line with the effort and pressure exerted by the settlement associations targeting the Negev Desert, most notably Regavim, which works to “influence the regimes in Israel to control the lands in the Negev and prevent foreigners from controlling them," as well as the Or Movement, which works according to a strategy to transform the Negev and the Galilee into independent and prosperous centers of life and engines of national growth.

Abu Freih said, “The settlement associations have been organizing periodic visits for settlers to the Negev Desert, to inform them of the plans they intend to implement to encourage them to move there, and to incite the government against the Arab Bedouins in the Negev.”

He added, “These associations insist on returning the land to the state, and realizing [former Israeli Prime Minister David] Ben-Gurion’s dream in having 2 million settlers working in the agricultural sector and 2 million settlers in the industrial sector in the Negev.”

The Israeli settlement plan in the Negev is based on controlling the largest area of the Negev land and limiting the Bedouin population in small residential communities, not subject to future expansion.

Most of the Negev’s residents live off grazing livestock, which requires them to move between the lands to search for grass and water amid an absence of living services and infrastructure.

Jumaa Zabarka, member of the political bureau of the National Democratic Assembly in the Negev, told Al-Monitor, “The settlement plan announced by Shaked targets the Azazima land, which was confiscated by the Israeli occupation army in 1956. Part of the settlements will be built on an area of 19,000 dunams [4,695 acres] in Bir Hadaj village, leaving out only about 5,000 dunams [1,235 acres] of it, which means 300 Palestinian families will be displaced.”

He pointed out that the residents reject Israel's plans to squeeze them into three recognized villages, saying, “Recognizing villages is a fraud because Israel does not recognize the residents' ownership of the land. Every new settlement will force Arabs into displacement after their land is confiscated.”

These plans will have many negative effects on the Bedouin population in the short and long term. “This is a battle of existence for the residents, and they cannot surrender,” Zabarka said. “The Arabs constitute about 32% of the Negev population while settlers constitute 68%. The Arabs live on only 3% of the total area of the Negev, while Israel controls 97%. The settlement projects will thus ensure a significant demographic advantage for the settlers.”

He noted, “There are seven villages in the Negev recognized by Israel, and 11 villages are in the pre-recognition phase while 35 others are unrecognized. Meanwhile, there are 114 settlements and kibbutzim for settlers. So new settlement projects will only enforce this reality, turning us into a minority that does not own any land.”

Zabarka stressed, “What Israel is planning in the Negev is an uprooting project, similar to the Nakba, and it is a plan rejected by the residents,” pointing out that steadfastness, legal action and popular protests are the only options the residents have to fight this.

The settlement plans are a new episode in Israel’s ongoing targeting of the Negev Desert, and they come eight years after the Palestinians within the Green Line and the Negev managed to bring down the Prawer Plan in 2013, which threatened to destroy most Negev villages, displace tens of thousands of Bedouin Palestinians and confiscate more than 800,000 dunams (197,700 acres) of their land.