The Bennett government plans on establishing a new Bedouin city in the Negev, but the way to realizing the project seems long and complicated. 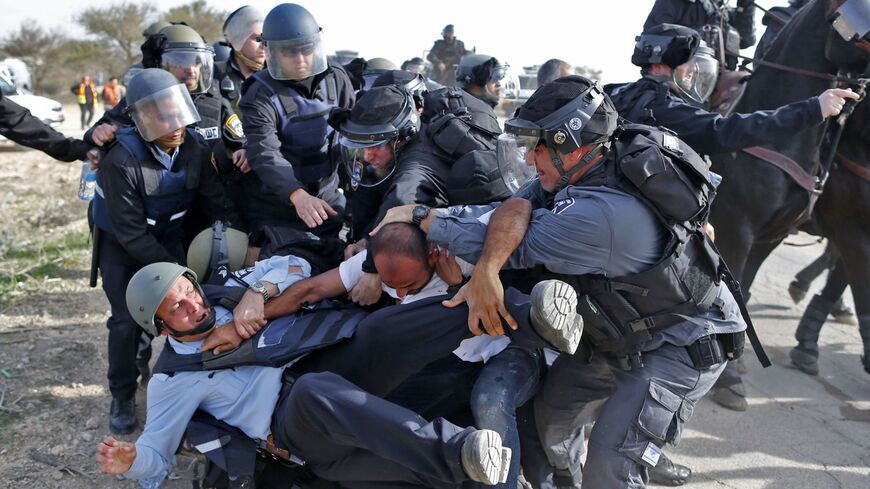 Israeli policemen detain a Bedouin man during clashes that followed a protest against home demolitions on Jan. 18, 2017, in the Bedouin village of Umm al-Hiran, which is not recognized by the Israeli government, in the Negev desert. - AHMAD GHARABLI/AFP via Getty Images

There aren’t very many Bedouins living in the Negev. All in all, they number close to 300,000 people, or 3% of Israel’s population. They are, however, one of the troubled groups in the region, afflicted by endemic poverty, low levels of education, and high rates of unemployment and crime.

One of the major problems facing the community is the dearth of housing. This can be attributed to the clan-based, nomadic structure of the traditional Bedouin community, which once wandered the region, but also to the shortage of settlements and neighborhoods that can address their distinct needs.

The government has begun to address this problem by deciding to create a new Bedouin city and to formalize “unrecognized villages,” which emerged without formal approval from the government, many of them built on state-owned land.

This change is happening because the Arab Ra’am party joined the government as a full coalition partner. Ra’am has many supporters in the Negev, and one of its Knesset members, Said al-Harumi, represented the community. Although Harumi died shortly after he was elected, the coalition agreement included recognition of three Bedouin villages and a program to settle the Bedouin “diaspora” of the Negev in permanent communities.

Many Bedouin in the region live in unauthorized tent compounds or shanty towns, without running water, electricity, and other basic infrastructures. The rest live in a single city, Rahat, and six other smaller towns built explicitly to organize the scattered community.

The new city is meant to provide the sector with infrastructures and services. Education, professional training, and concentrated centers of employment would help a traditional community adopt a more West-oriented lifestyle. At present, the Bedouin sector has the highest unemployment rate in the entire country — almost double the national average — as well as the lowest income per capita.

Nevertheless, a new city faces many obstacles, starting with its precise location, since the local Bedouin population is suing for ownership of most available areas. Although these lawsuits have been rejected by the courts, other tribes have avoided relocating to those areas. Furthermore, the established Bedouin towns are already struggling with low levels of education, difficulties adapting to a more urbanized lifestyle, lack of jobs, and violence.

The proposed solution to the unrecognized villages is to grant formal recognition to three of them, located on state-owned land. Interior Minister Ayelet Shaked, has demanded that as a condition of recognition, at least 70 percent of Bedouins living in the local diaspora must commit to leave their traditional lands and move into one of these three villages or the new city, once it is established. There is a 5-month deadline for this to happen.

Transportation Minister Merav Michaeli of the Labor Party may oppose these conditions, but the heads of the local Bedouin tribes in the Negev agree to them, provided that the three villages are recognized and the demolition of illegal buildings is halted at least until the process is completed.

The main supporter of this move has been Knesset Member Mansour Abbas, leader of the Ra’am party. He sat with the heads of the Negev tribes in order to reach an agreement, and has already managed to get the demolitions stopped, at least temporarily. He even managed to get many of those homes connected to the electrical power grid.

Sheikh Auda Zanoun, a Bedouin leader from the unrecognized village of Rakhame, told Al-Monitor that recognition must happen quickly, because his village has urgent needs. “We don’t have a civilian service center, and our elementary school was built without basic infrastructures or access to the road. We have no mosque, no football pitch, no mail services, no Tipat Halav maternity care, and no bus stops. I hope that all this will be fixed quickly, because we really are suffering."

Ma’igal Al-Hawashla, coordinator for the Unrecognized Villages Regional Council, says that this initiative marks the beginning of the process, since it deals with about 30,000 residents. Nevertheless, more needs to be done. All the villages need to be recognized in order to give the residents hope.

Interestingly, the entire process has managed to win the support of both extremes: the Bedouin of the unrecognized villages on one hand, and supporters of right-wing Jewish organizations such as Regavim, which documents Bedouin seizure of state lands. Regavim tells Al-Monitor that if the program really is implemented in full, with all of its carrots and sticks, it offers the Negev a chance for a better future, by returning state-owned lands to government control.