Members of the Joint List are angry over what seems to be rapprochement, perhaps even a political deal, between Prime Minister Benjamin Netanyahu and Knesset member Mansour Abbas. 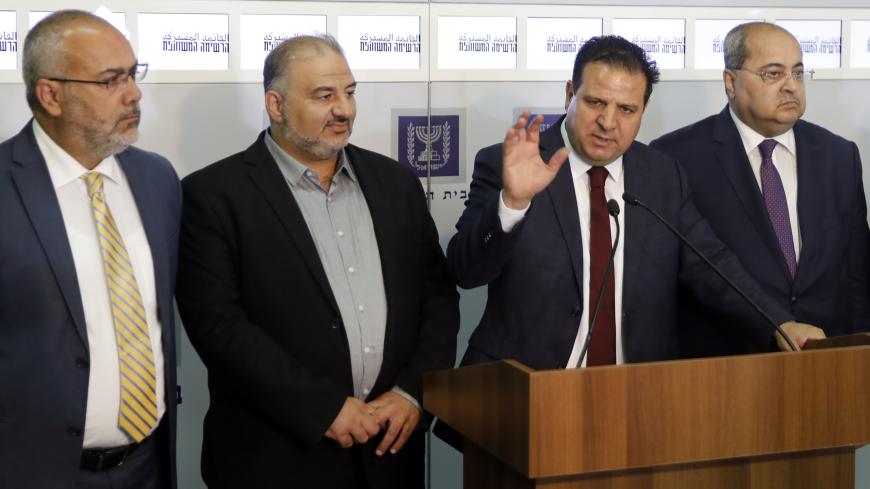 Members of the Joint List Ayman Odeh (C) speaks to the press in the presence of Ahmad Tibi (R), Osama Saadi (L) and Mansour Abbas (2nd-L) following a meeting with Israel's president in Jerusalem on Sept. 22, 2019. - MENAHEM KAHANA/AFP via Getty Images

“The age of the boycott by Arab Knesset members is over," Ronen Tzur, senior adviser to Defense Minister Benny Gantz, tweeted Dec. 21. "The next government will include them regardless of whether it is formed by the right or the left. This historic achievement can be attributed to one man: [Prime Minister] Benjamin Netanyahu.”

The Knesset's failure to pass a budget or proposed legislation to extend the budget debates beyond their deadline meant that the Israeli parliament was dissolved and that new elections were called.

Tzur was referring to the absence of the Ra’am parliamentary faction from the Knesset plenum at the time of the crucial vote. Ra’am is one of the four factions composing the Joint List, which worked with other opposition parties for the current Knesset to be dissolved and new elections announced. This mission was accomplished, no thanks to Ra’am legislators, including faction leader Mansour Abbas.

This was not the first time that Ra’am legislators refused to vote to dissolve the Knesset. They did the same in early June due over talks between Ra’am and the Likud. In the ensuing tension with the other parties that make up the Joint List, Knesset members from Ra’am announced, “We are in no one’s pocket.”

But on two separate occasions, Abbas and the other members of Ra’am have openly expressed their gratitude to Netanyahu. Does it mean there some kind of deal in place between Netanyahu and Abbas?

Last week, Abbas posted on Facebook that he had received phone calls from Government Secretary Tzahi Braverman, economic adviser Avi Simhon and Economy Minister Amir Peretz. Abbas said that they called to inform him that the government would discuss and approve recognition of three Bedouin villages in the Negev (Rakhma, Abdih, and Hashem Zana), as well as establish a new Arab city in the southern region. Abbas went on to say that this development was the direct result of his talks with the prime minister’s office and efforts Ra’am Knesset member Said Al-Harumi, who is responsible for Bedouin affairs in the Joint List.

In tweeting about the three villages, Joint List leaders Ayman Odeh and Ahmad Tibi congratulated Al-Harumi while ignoring Abbas. It could indicate that tensions are rising between the various factions that make up the Joint List.

Nevertheless, the celebrations seemed premature. When Peretz added the proposed law recognizing the Bedouin villages to the government’s agenda, he did not propose a parallel law to legalize Jewish settlements in the West Bank, greatly angering the right. Knesset member Bezalel Smotrich of pro-settler Yamina tweeted angrily, “Netanyahu continues to sell out Zionism and right-wing values. His government is now seizing the opportunity to approve three new Bedouin settlements in the Negev, but of course, it is not approving the youthful settlements in Judea and Samaria. Netanyahu. Left. Weak.”

As would be expected, the proposal to legalize the Bedouin villages was soon met with sharp criticism among Likud ministers as well. They also demanded that any such legislation be accompanied by the legalization of the “youthful settlements,” a euphemism for illegal settlements and outposts. The law to approve the Jewish settlements was originally proposed by Minister of Settlements Tzahi Hanegbi of the Likud and the Blue and White's Michael Biton, who serves as minister for civil and social affairs in the Defense Ministry. Hanegbi announced, “I will oppose Amir Peretz’ proposal to establish Bedouin settlements in the Negev as long as the Blue and White Party prevents the youthful settlements from being legalized. Most ministers agree with me. The vote has been postponed.” And it was.

Upon coordinating his response with Gantz, Netanyahu announced that they decided that both recognizing illegal settlements in the West Bank and approving unrecognized Bedouin villages in the Negev will be raised together at some future cabinet meeting. Meanwhile, Gantz told his Blue and White ministers that he decided to remove the proposal from the agenda out of concern that Netanyahu and Abbas had made a deal to present these achievements to their electorates before the upcoming election.

Abbas responded in a statement to the media attacking Gantz for his decision: “The Arab sector recommended you twice to serve as prime minister. Do not delay recognition of the three villages in the Negev. Ra’am has no deal with Netanyahu and the Likud. Everything that I am doing is in full coordination with Minister Amir Peretz. It is time for you to pay your debt to those who made you alternative prime minister.”

In the past, Netanyahu opposed recognition of Bedouin settlements in the Negev. His current willingness has been taken as a result of his emerging political alliance with Abbas and Ra’am.

Will the relationship and possible deal between Netanyahu and Abbas break up the Joint List? There are voices with in the Joint List calling for the party to end its relationship with Ra’am, but the deciding voice will likely be Tibi’s. It's ironic that in the April 2019 election, it was Tibi himself who split the Joint List. Now he has told Al-Monitor, “I oppose a split. I want to preserve the Joint List.” When asked about postponing recognition of the Bedouin villages, he said, “It has been postponed to some unknown date. Netanyahu is tying it to the recognition of illegal [West Bank] outposts, and that is very dangerous.”