The Joint List was hoping to use the vote on the controversial citizenship Law to embarrass its rival Muslim coalition party Ra’am. 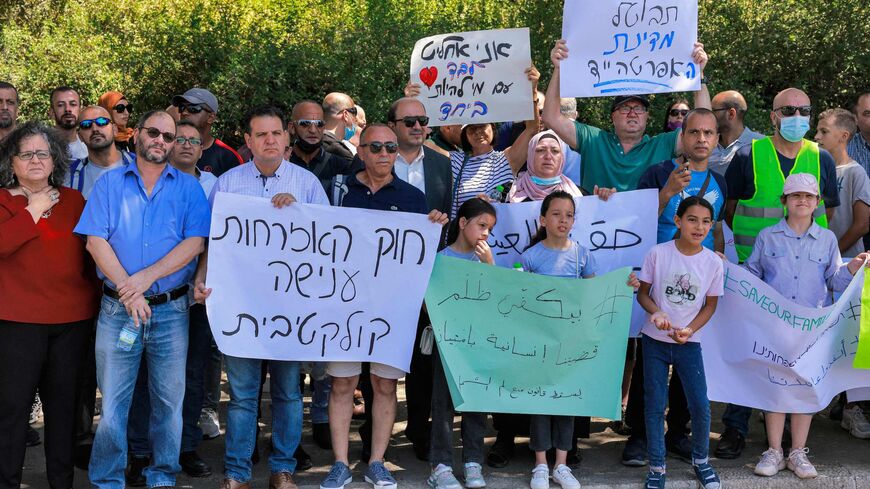 (L to R) Aida Touma, Ofer Cassif and Ayman Odeh, members of the Israeli Knesset for the Joint List, attend a protest against a controversial citizenship bill outside the Knesset headquarters in Jerusalem on June 29, 2021. - MENAHEM KAHANA/AFP via Getty Images

Just before leaving for spring recess on March 10, the Knesset approved Israel's controversial citizenship law with 45 for and 15 against. After almost nine months of debate, the new legislation effectively denies West Bank and Gaza Palestinians married to Israeli citizens from gaining citizenship or residency status.

After the vote, Interior Minister Ayelet Shaked said in a statement, “This is a Zionist law for our national security that should not have been abandoned for narrow politics.” She later celebrated with a victory tweet: “A Jewish and democratic state 1; a state for all its citizens 0.”

The law was originally adopted in 2003 as a temporary measure that was extended annually. Last July, the Bennett government brought it up for adoption as a regular law, only to see the bill defeated. In an effort to present unity within the coalition, most Meretz and Ra’am legislators did not vote against the bill, Still, the opposition succeeded in blocking it. While right-wing opposition parties led by former Prime Minister Benjamin Netanyahu supported the concept of the law, they were intent on embarrassing the coalition.

This time around, the coalition operated differently. Shaked worked together with Knesset member Simcha Rotman of the opposition Religious Zionist party to win support from Jewish members of the opposition. While Meretz and Ra’am opposed the bill this time, it passed.

The real drama, however, took place among the Arab parties. At first, the Joint List tried to turn the ballot into a confidence vote in the government, a situation that would have prevented Arab coalition party Ra’am from voting against the bill once again. It would have embarrassed Ra’am tremendously — the intention of the Joint List — but it did not work out. Then, the Joint List tried another tactic. At the last minute, Joint List senior Ahmad Tibi decided to challeng Ra’am leader Mansour Abbas. He called on Abbas and his party to join his Joint List in supporting measures to dissolve the Knesset and call yet another election. Again, it was intended to embarrass Abbas and Ra’am before the Arab community.

The last-minute move generated a heated dispute in the Knesset plenum. Though Abbas opposed the citizenship law, he announced that he would not support the dissolution of the Knesset and would oppose any such proposed legislation. He attacked Tibi and the Joint List, saying, “Dr. Ahmad Tibi, at our last meeting with the Joint list, I was given to understand from you and [Joint List chair] Ayman Odeh that your goal will always be to dissolve every Knesset and take down every government. In Ra’am, our goal is to serve all of Arab society and society in general. Dr. Tibi, it is not the fate of Arab society for hundreds of thousands of people to vote just so that you and your friends have jobs in the Knesset. We are trying a new path. We want to give it an opportunity. We will do everything we can to meet the interests of Arab society.”

Abbas' remarks stunned the members of the Joint List, especially with Abbas' mention of the very sensitive issue of access to political office. Arab voters frequently accuse the Joint List of keeping the party a private club that keeps any other Arab candidates from running for the Knesset.

Despite pressure to respond to Abbas’s charges, the Joint List waited until the next day to release a video on social media accusing Abbas of being responsible for the passage of the citizenship law. In it, they argued, “Ra’am under Abbas chose the current government over women and children who are victims of the law to prevent the reunification of families,” as they call it in Arabic.

Ra’am responded by asking the Arab sector to be wary of rumors. They said that the party “voted against the government on the citizenship law and still stands for the cause of reuniting families and improving their legal status.” In an interview with Channel 12, Abbas took it a step further, saying, “On one hand, we have the issue of family reunification, while on the other, we have the unrecognized [Bedouin] villages in the Negev, the problem of crime and violence [in Arab towns and villages], the lack of housing and more. When we want to make a decision, we take all of this into consideration and decide accordingly.” His clear message was that right now it is preferable to focus on other issues of concern to Arab society that can be advanced by the current government, and that this leverage is preferable to bringing down the government for a single issue.

His words described the new approach Ra’am emphasized in the last election. Politics is not all or nothing. The party may not get everything it wants, but it will be able to achieve more as part of the coalition than in the opposition.