With pictures of violence on Temple Mount flooding social media, the Islamic Ra’am party in the coalition had no other choice but to temporarily suspend its membership in the coalition. 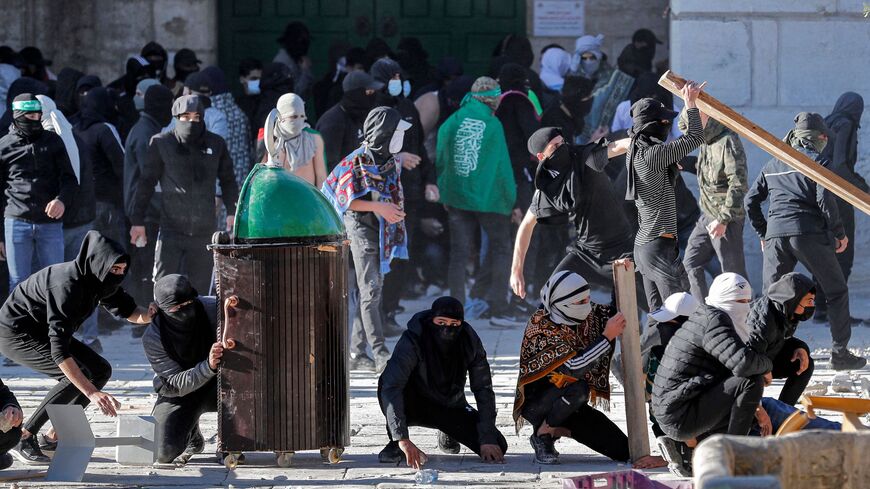 On April 19, Israel’s political leadership decided to shut down Haram al-Sharif/Temple Mount Compound to Jewish visitors and tourists until the end of the holy month of Ramadan. The decision came in response to recent tensions in Jerusalem in general and Al-Aqsa Mosque in particular.

Sources in the police and government pointed out that there is nothing new about the decision and that the compound has been closed to Jewish visitors every year toward the end of Ramadan. Still, the decision was clearly generated by the violent outburst on the site last Friday, when clashes broke out between Muslim worshippers and Israeli police. Large groups of masked protesters threw rocks and firecrackers, leading to a police response that left many injured. Minister of Regional Cooperation Esawi Frej congratulated the police on its April 19 decision, tweeting: “The decision to bar non-Muslims access to Al-Aqsa compound from the end of this week until the end of the month of Ramadan is an appropriate decision at this time.”

While the government tries demonstrating that the security crisis is under control, it evidently has a hard time coping with the political fallout — more particularly, with the April 17 decision by the Islamist party Ra’am to freeze its coalition membership.

A steady flow of shocking photos from the April 15 incident appeared on social media networks locally and around the Arab world. This, in turn, put pressure on Ra’am from some parts of the Israeli Arab sector to quit the coalition.

Senior leaders of the Southern Faction of the Islamic Movement, affiliated with Ra’am, joined the calls in the street to quit the coalition. These voices included the mufti of the Islamic Movement, Sheikh Muhammed Salameh Hasan, and two former members of Ra’am, Ibrahim Sarsur and Masud Ghanayim. Sarsur wrote, “Jerusalem and the Blessed Al-Aqsa Mosque are more important to us than all the billions of Israel!” hinting at the five-year plan for the Arab sector that Ra’am obtained as part of its coalition negotiations. Ghanayim stressed, “The Blessed Aqsa Mosque and its prohibition and our right to it, beyond any political consideration, and a government whose forces violate our mosque and raise our blood has no right to remain ungrieved.”

Thus, two days after the Friday riots, the Shura Council — which serves as the religious authority for Ra’am — convened for an emergency meeting. It was following that meeting that Ra’am decided to temporarily freeze its membership in the coalition.

But what does a temporary freeze actually mean? Will Ra’am quit the coalition? It now appears that the meeting of the Shura Council was especially complicated, with two distinct opinions on the matter.

The first, led by Ra’am party chairman Mansour Abbas, opposed quitting the coalition. He worked hard to recruit as many supporters among the Shura Council as possible and to draw things out until the situation on the ground calms down. The other side called for Ra’am to withdraw from the coalition immediately. They made it perfectly clear that there can be no compromises when it comes to Al-Aqsa Mosque. The final decision was both creative and unprecedented in Israeli politics. Ra’am would put a freeze on its membership in the coalition and on its participation in Knesset activities. In real terms, what this means is that it would not participate in votes in the plenum or committees when the Knesset returns from recess.

How long is this freeze expected to last? The day after the decision, in an effort to end the coalition crisis, Abbas posed an ultimatum to Prime Minister Naftali Bennett. If the government and coalition meet Ra’am’s demands, it would cancel the freeze. These demands included a commitment to maintain the status quo in Al-Aqsa Mosque and other Muslim holy sites, a commitment in writing to resolve certain issues now stuck with Minister of the Interior Ayelet Shaked, more intense efforts to collect illegal guns in the Arab society and more.

The Likud was furious about Ra’am’s demands and immediately attacked Bennett for them: “The Jewish people are being trampled and humiliated in their only country, and it is all thanks to Bennett,” declared Knesset member Ofir Katz. Former Foreign Minister Yisrael Katz lashed out as well, saying, “He is being peeled like an onion, layer by layer. We need to stop this dangerous farce and agree immediately on a date for new elections.”

Then there is the Arab Joint List in the opposition. They jumped on the opportunity to attack Abbas and Ra’am for the decision. The members of the Joint List even seemed to be competing among themselves over who could be most creative in their attacks. Party leader Ayman Odeh mocked the decision, saying cynically that “not showing up in the Knesset when it is on recess is a dramatic decision.” Knesset member Ahmad Tibi called the decision evidence of a sense of humor, tweeting, “They may be members of the coalition, but they do have a sense of humor. A recess sense of humor.” Knesset member Ofer Cassif of Hadash noted, “Ra’am’s announcement that they were ‘freezing’ their membership in the coalition while the Knesset is on recess is like announcing a diet during Ramadan.”

The Arab society in general also responded with derision to Ra’am’s announcement, especially since the Knesset is on recess. Former Knesset member Talab Al-Sana posted: “It is worth mentioning that in Israeli law there is no term 'freezing membership in the coalition' whether you are a member of the coalition or outside the coalition. The decision is also worthless because the Knesset left for spring break in March, and that lasts until 8 May.” Journalist Wadea Awawdy wrote: “Bringing down the government would have helped Ra’am in the next election. The decision to hold the stick by both ends only worsens its position.”

One person who took advantage of the situation wisely was Knesset member Bezalel Smotrich of the right-wing Religious Zionist Party in the opposition. He called on the speaker to convene the Knesset during its recess to decide on a bill to dissolve the current Knesset. That way, either the government would fall or Ra’am would be forced to appear in the Knesset to vote against it, despite all their statements about suspending their membership. Either case would have humiliated them.