Ra’am leader Mansour Abbas' coordination with Prime Minister Naftali Bennett about his visit last week to Jordan and his meeting with King Abdullah might signal that he is willing to end his party’s suspension of activity in the coalition. 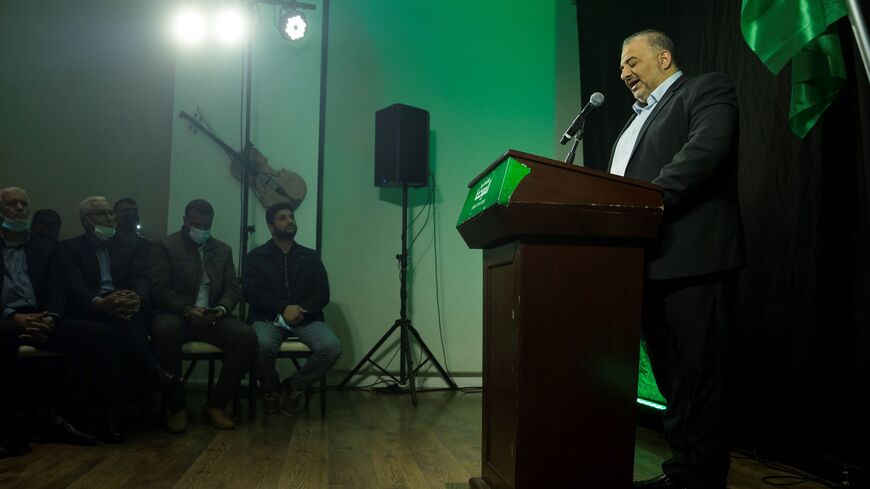 Ra’am party chairman Mansour Abbas was in Jordan April 28 for a meeting in the palace with King Abdullah II. Abbas had been invited to attend a Ramadan Iftar diner, but once the meal was over, he and the king discussed the implications of clashes between worshippers and Israeli security forces in the al-Aqsa mosque compound. Abbas was the first Israeli political figure to meet with the king since the beginning of the current tensions on Temple Mount.

In Israel, every meeting with the Jordanian king scores positive political points, especially with Israeli Arabs. That makes it clear why Prime Minister Naftali Bennett approved the trip. Bennett’s future, and the future of the coalition, depends on Abbas. Thus, a meeting in the palace, which benefits the Ra’am leader, has internal political implications in Israel.

When the Knesset returns from its spring recess May 9, the coalition will face a major fight for survival. It lost its slender majority April 6, when Knesset Member Idit Silman of Yamina resigned.

Topping this coalition disaster was the April 17 decision by Ra’am’s religious leadership, the Shura Council, to provisionally freeze all party activities in the coalition, to protest Israeli aggression on the Temple Mount. It later emerged that the decision was coordinated between Abbas and Foreign Minister Yair Lapid. This unprecedented formula allowed the party to alleviate some of the public pressure it was facing in the wake of events on the Temple Mount.

That in itself was hardly a good sign for the troubled coalition. Ra’am was actually signaling that it is in trouble: If it fails to obtain benefits for its electorate, it will be forced to leave the coalition. That would mean the immediate collapse of the current government.

Abbas now holds the keys to the coalition’s continued survival. He is also under enormous pressure from certain factions in his party, who want to end their partnership with the government. He is working to prevent that, but with no assurance of success.

The meeting between Abbas and the king could help stabilize the coalition by allowing Ra’am to renege, even slightly, on its total freeze on Knesset activity.

Abbas is telling his religious Muslim base is that he remains committed to them, and to their interests regarding the al-Aqsa mosque. After all, Jordan is considered the guardian of the holy Muslim sites in Jerusalem. A visit to the palace indicates the key role Abbas plays in determining Israeli policy, as well as the respect he has earned from King Abdullah.

On the other hand, pictures alone are not enough to calm the unrest among the Arab-Israeli sector, incited by Abbas’ arch-rivals in the Knesset, the Arab Joint List. Abbas must prove that he has achieved something from his partnership with the government, which is why he met with Lapid last week and with Prime Minister Naftali Bennett on Sunday. He wanted to reach an agreement with them to rejoin the coalition.

According to reports from these meetings, Abbas presented a list of conditions to Lapid and Bennett, including the immediate transfer of the infrastructure and construction budgets for the Arab sector that were promised to him in the coalition negotiations; the immediate recognition of the unrecognized Bedouin villages in the Negev; and an increased Jordanian presence on the Temple Mount. People close to Bennett have made it clear that they have no intention of agreeing to this third condition.

As a result of Abbas’ meetings, senior members of the coalition anticipate that at its May 15 meeting, the Shura Council will ease up on its complete freeze on Ra’am’s participation in the coalition, though it will instruct him to do so gradually.

It is clearly in Abbas’s interest to continue his party’s partnership with the coalition. The fact that the party, under his leadership, is part of the ruling government is a historic first, whereas if the coalition falls, he will face a new election without having obtained any real benefits for the Arab sector.

The tense verbal exchanges between Abbas and Hamas leader Yahya Sinwar in Gaza also carry implications for the coalition’s survival. On Saturday, less than a day after the shooting of a security guard in the West Bank settlement of Ariel, Sinwar accused Abbas of treason for being part of the coalition. “Serving as a safety net for this government is a crime for which you [Abbas] will never be forgiven. You are rejecting your religion, your Arab identity, and your national identity.”

Abbas did not hold back. He first said, “We won’t be scolded by him,” and in a different interview said Ra'am believes that "the processes of partnership and tolerance that we are leading in Israel will bring peace between Israel and the Palestinian people closer.”

Senior member of the coalition sighed in relief. Abbas did not succumb to Sinwar’s pressure, nor did he apologize. On the other hand, they are also aware that the Arab sector in Israel hears all this criticism, and that at least some members of the community are influenced by it.

Opposition parties on the right, however, claimed that the Temple Mount is now being controlled by Abbas, Sinwar, and King Abdullah. This also has an impact on coalition members from the right, who are subject to pressures of their own from their electorate.

Bennett’s Yamina party is uneasy because of this. Reports say Knesset member Nir Orbach admitted privately that he is facing a complicated situation, which he finds difficult personally. He was further quoted as expecting the government to help with certain achievements to benefit the right, which he can then present to his religious nationalist electorate.

To what degree do the members of Yamina really feel that the end is near? Interior Minister Ayelet Shaked, who is number two in the Yamina party, held a meeting recently with the staff of her ministry and other political figures, instructing them to prepare to “clear their desks.” Shaked believes that the coalition will survive for only a short time, so she wants them to complete the major reforms that she promoted.

Bridging the ideologies of Yamina and Ra’am, each with their own distinct religious base, will be difficult if security concerns intensify, particularly for a coalition that has already lost its majority.