The worsening crisis around the Temple Mount and the killing of an Al Jazeera journalist in Jenin this morning have the shaky Israeli coalition even more fragile. 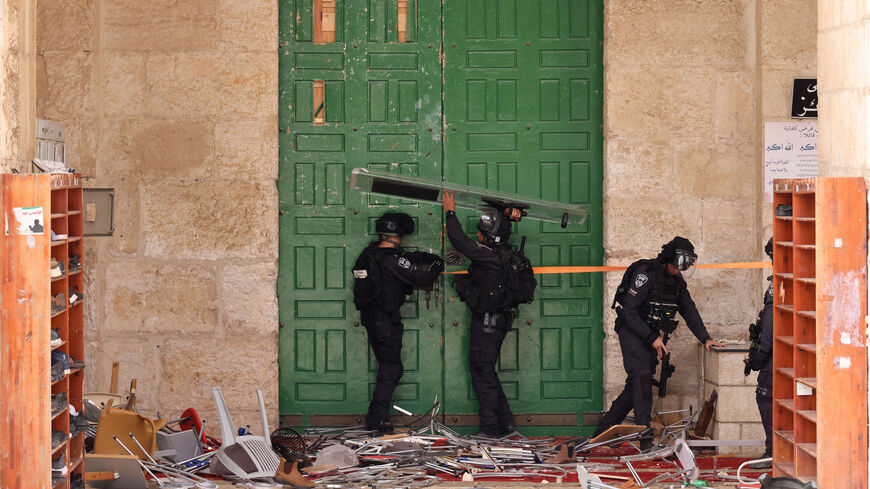 Israeli police secure the door of Al-Aqsa mosque during clashes with Israeli security forces on May 5, 2022. - AHMAD GHARABLI/AFP via Getty Images

Israeli's Ra’am Party assured the government of Prime Minister Naftali Bennett today that it is going to stay in the coalition for the time being. Ra’am had suspended its coalition partnership some three weeks ago over tensions on the Temple Mount, also known as the Al-Aqsa compound. Addressing the press, Ra’am leader Mansour Abbas said this afternoon that the party has decided to continue its political partnership with the government for the benefit of Arab citizens of Israel. The decision thwarts efforts by the opposition to topple the government through a no-confidence vote in the Knesset.

While Ra’am's decision has bailed out the government for the short term, it remains very vulnerable. On May 9, the Joint List opposition party's members held up the government by either abstaining or voting against two no-confidence motion, but this breather could be short lived. At any moment, another coalition member, be it from Bennett’s Yamina party or from Ra’am, could decide to cross the lines and join the opposition.

The government’s vulnerability is complicated, but it all comes down to the difficult coexistence between Bennett’s right-wing pro-settler Yamina and the Muslim Ra’am. Tensions over the Temple Mount in the last few weeks and the killing this morning of Al Jazeera correspondent Shireen Abu Akleh in a West Bank refugee camp while covering an IDF raid have deepened the divide.

The fate of Bennett’s government now largely depends on the Shura Council, which is the supreme religious leadership of Israel’s Islamist movement and of its Knesset representation Ra’am.

Allowing Ra’am to join the coalition last June was a dramatic decision by the Shura Council, and its impact was felt across Israeli society and politics. Suddenly, a small, Islamist party with just four seats in the Knesset became the ultimate decision-maker in the coalition's narrow majority of just 61 seats. Then a few weeks ago, at the peak of the riots on the Temple Mount, the Shura Council instructed Ra’am to suspend its coalition activities in protest of Israeli aggression. The move sent the government of Bennett into a tailspin.

On May 10, the Shura Council convened to discuss whether Ra’am should leave the coalition once and for all. Activists in the party hinted that Ra’am could end the suspension if the government accepted a series of demands concerning Muslim prayers on the Temple Mount and a reduced Israeli presence on the site.

In his announcement to the press today, Abbas did not set any specific conditions for Ra’am's return to the coalition. He said, "We reached understandings for the betterment of Arab society and Israelis in general. We decided to come back and give an opportunity for the coalition agreements to be implemented." He added that the party members "expect the government to meet its commitments. We expect Prime Minister Bennett to address the issues we have raised."

It is clear that the survival of the government hinges on an Islamist Arab party that campaigns for Jewish prayers on the Temple Mount to be further restricted. Bennett, a religious man and leader of right-wing party, finds himself caught in a trap. His coalition has already lost crucial seats and its majority. Without Ra’am it will undoubtedly collapse in a matter of days. On the other hand, acquiescing to these demands would be deadly to his public image. Large swathes of Israelis will see him as a weak leader who was extorted by an Arab party.

Bennett had an excellent relationship with Abbas until recently. The problems began last week, when Knesset members Nir Orbach and Yomtov Kalfon and Interior Minister Ayelet Shaked praised the reopening of the Temple Mount compound to Jews for Independence Day, after it was closed during part of Ramadan and following clashes between Palestinians and security forces on the site. Kalfon visited the site himself.

The Shura Council perceived these statements as provocation against Muslim worshipers. Some of them advocated obligating Ra’am to leave the coalition immediately. Abbas thus found himself in a trap.

Abbas wants to see the current government survive. He was, after all, one of its main architects. But for this to happen, he must show his supporters achievements  on the Temple Mount. That need was clearly the reason behind his May 7 Facebook post, positioning himself as the champion of the Al-Aqsa Mosque cause.

“The unified stance in the coalition regarding the Holy Al-Aqsa Mosque will be determined based on the outcome of the Israeli-Jordanian International Committee meetings,” wrote Abbas, adding, “I also confirm that the demands and views regarding the Holy Al-Aqsa Mosque are defined and directed by His Majesty King Abdullah II of Jordan, the author of the covenant on the Holy Al-Aqsa mosque and the religious sanctities in Jerusalem.” Abbas said it was his duty, as is the duty of all Arabs and Muslims, to support the efforts of King Abdullah on Al-Aqsa.

Abbas' post quickly made headlines in Israel. Bennett was humiliated. His opponents on the right attacked him at once, saying that he was willing to deal a mortal blow to Israeli sovereignty on the Temple Mount in favor of Jordan for the sake of his political survival and noting the backdrop of a Palestinian terror wave and its Jewish victims.

The following day, May 8, it was Bennett’s turn to deliver a scathing response to Abbas in an effort to reduce damage to his image. Addressing the weekly cabinet meeting, Bennett said, “All decisions regarding the Temple Mount and Jerusalem will be made by the Israeli government, which holds sovereignty over the city, without any foreign considerations,” adding, “We certainly reject any foreign interference in the decisions of the Israeli government. Of course, the State of Israel will continue to maintain a respectful attitude toward members of all religions in Jerusalem. A united Jerusalem is the capital of only one state — the State of Israel.”

The story did not end there. Two days later, it was reported that Israel acceded to Jordan’s demand to increase the number of waqf officials on the Temple Mount. Bennett denied this, saying that he received a request from Jordan to increase their number to 50, but Israel did not agree to it.

Bennett was on the defensive yet again. “There is no change or new development in the situation on the Temple Mount — Israel’s sovereignty is preserved. All decisions will be made by the Israeli government out of considerations of sovereignty, freedom of religion and security, and without pressure from foreign factors or political factors,” read a statement from Bennett’s office.

While Bennett's statement clearly infuriated Ra’am, the party seems to have let it go, at least for now. The current coalition crisis might be over, but Bennett knows the reprieve is temporarily. Even with Ra’am back in the fold, he still has only 60 coalition members, one short of a Knesset majority.