The opposition Joint List refrained from supporting two no-confidence votes against the government, and the announcement of Ra’am ending its coalition membership suspension, reflect the ongoing tensions between Israeli-Arab politicians. 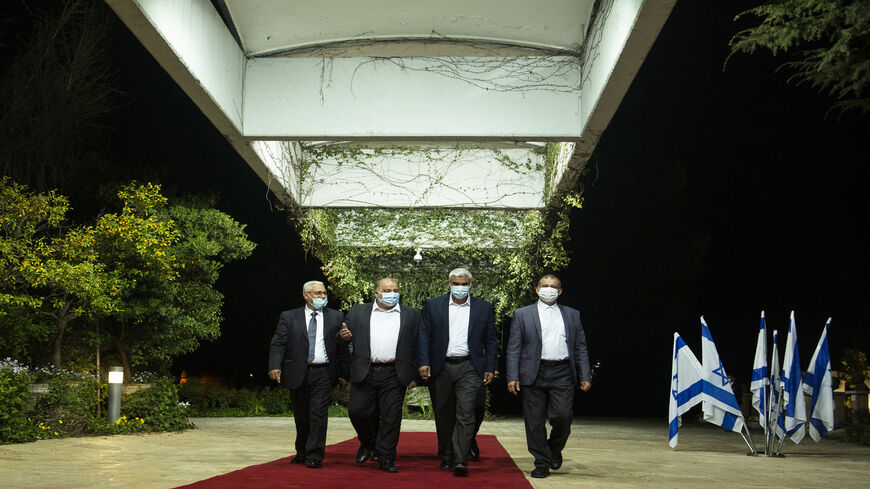 The Muslim Ra’am party announced May 11 it intends to stay in the coalition. The dramatic announcement came after a nerve-wracking day, where all eyes in Israeli politics were focused on the decision of the Shura Council that spiritually guides Ra’am.

Addressing the press, Ra’am Chairman Mansour Abbas said, “We reached understandings for the betterment of Arab society and Israelis in general. We decided to come back and create an opportunity for the coalition agreements to be implemented.” Abbas now offers Prime Minister Naftali Bennett another chance for their political partnership, by returning to full working relations with the coalition.

The press conference of Abbas ended three weeks of a political crisis, after Ra’am’s April 17 decision to freeze its membership in the coalition. The freeze decision was taken at the time by the Shura Council, on the backdrop of clashes on the Temple Mount between Palestinians and Israeli security forces.

Abbas now offers Bennett another chance for their political partnership, returning to full working relations with the coalition. More important even, the announcement of Abbas put an end to opposition attempts, led by the Likud, to advance a vote to dissolve the Knesset. Indeed, minutes after the press conference, the opposition decided to withdraw a proposed no-confidence vote against the government.

Abbas' announcement offered extra drama. Not just because it was unexpected, but also because of the political brawl that ensued. Standing in front of the cameras, with the other three Ra’am Knesset members by his side, Abbas spoke first in Arabic. Clearly, he was conveying to his constituency a message that he is in control of his party. But while the cameras were rolling, far-right Knesset member Itamar Ben Gvir suddenly appeared at the hall.

Interruping the press conference, Ben Gvir shouted at Abbas, “You are the greatest threat.” Ra’am members shouted back among other things, “You’re a convicted terrorist. They expelled you from Elad, get out of here.” After many minutes of arguing, Ben Gvir was removed from the area, and Abbas continued, “Now everyone can see who is a normative citizen who seeks peace and partnership, and who is the agitator and instigator. Ra’am represents the sane voice not just in the Arab community, but in Israeli society and the entire public.”

Clearly, Abbas sought at the press conference to send a sharp and clear message that it is possible to create a coalition in the State of Israel with an Arab party. On the other hand, he was careful not to elaborate on whatever agreements were reached with the leaders of the coalition, for Ra’am to come back. In response to Abbas’ announcement, Bennett simply said, “We are a government of action and good will, and distance ourselves from matters that don’t contribute to this.” Like Abbas, he refused to address what was promised to Ra’am in exchange for their canceling the freeze and returning to the coalition.

The Likud rushed to attack the government in light of Ra’am’s decision. Its members repeated the message that it is only a matter of time until the government falls.

Knesset member Tzachi Hanegbi said in an interview with Radio Kan, “It was embarrassing and even pathetic to watch the government and the prime minister waiting to see if Abbas will conduct artificial respiration on this government. These are its last breaths, sometimes dying is a long process.”

Chairman of the opposition Benjamin Netanyahu posted on social media a video in which he said, “The whole country has seen the weak and capitulating government of Naftali Bennett held hostage by the Shura Council. We can’t continue like this. We can’t allow that in the Jewish state the government is held up by the Shura Council of the Muslim Brotherhood.”

This is interesting, because the Joint List has declared since the formation of the government that they will act at any opportunity to bring it down. They kept declaring it is a bad government. The May 9 two no-confidence votes could have offered it exactly that, a chance to publicly engage in efforts to topple the government.

Ra’am jumped on the opportunity to attack the Joint List following its decision not to support changing the government.

Waleed Taha noted that according to plenty of statements by Joint List members, the current government was the "bloodiest in the history of Israel," that it encouraged assaults on Al-Aqsa Mosque and the killing of Palestinians. And still, after all these allegations, the Joint List did not support the no-confidence votes. "Why did you vote with it [the government], despite all your claims and accusations against it and against us, honorable people?!"

Abbas in turn wondered, “Has the truth been revealed or is it insurgency and party and personal disputes?”

The Joint List did not remain complacent to the criticism on Arab social media. Criticized over supporting the same government they have been calling to topple since its establishment, Chairman of the Joint List Ayman Odeh posted a video in Arabic explaining to the Arab public the reason for their votes. He said the party did not support the two no-confidence votes because it opposes replacing the Bennett government with a Netanyahu government.

As mentioned, the vote Odeh and Tibi referred to, never took place. Ra’am’s May 11 announcement reshuffled the cards, perhaps saving the Joint List from another political test.