For Ra’am Chair Mansour Abbas, the approval of the 2021-2022 state budget is a political and personal achievement. 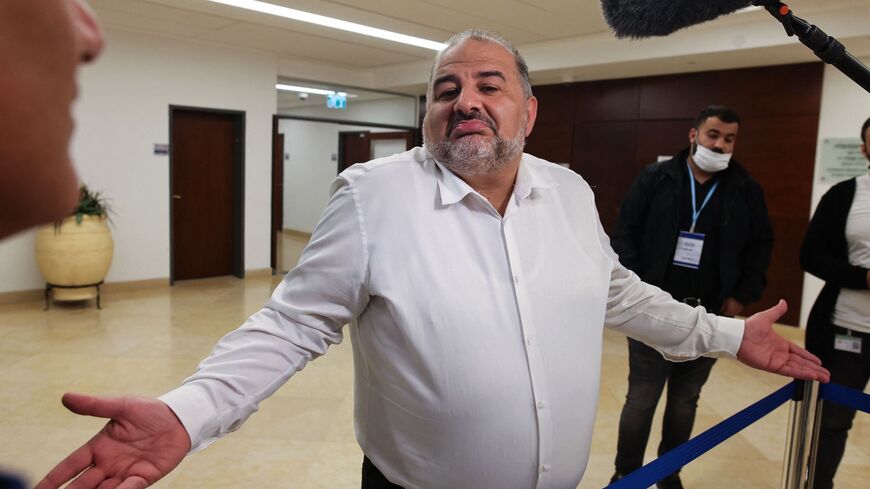 Head of Israel's Ra'am Party Mansour Abbas gestures as he speaks to reporters following a session at the Knesset in Jerusalem Nov. 4, 2021. - AHMAD GHARABLI/AFP via Getty Images

After three days and at the end of a long negotiation, the Bennett-Lapid government managed to pass the two-year budget for 2021-2022 in full Nov. 5. By approving the budget, the coalition succeeded in removing the threat of a new election, ensuring a period of political stability. The joy at the coalition over this achievement was clear as its members celebrated in the Knesset, clapping and patting each other on the back.

One of those celebrating was chair of the Islamic Ra’am Party Mansour Abbas, and for good reason. Abbas made history when he made Ra’am the first Arab party to join a coalition and take an active part in forming the Israeli government.

“This is the first time an Arab party has taken a central role in passing the budget and forming a coalition,” Abbas tweeted shortly after the budget was passed. “It’s an important step in the process of political integration, realizing our right to civic partnership and taking collective responsibility to benefit all citizens, Arabs and Jews.”

These accomplishments were hard won. Abbas and Ra’am faced some difficult days, with criticism from both sides of the political map.

The Joint List, the largest Arab party in the Knesset, is part of the opposition. In the competition over Arab votes, its members directed a variety of accusations at the budget and its supporters. For instance, Joint List Chair Ayman Odeh said at the Knesset podium that “only wicked people, bad people, people who hate themselves and hate their constituents would vote for such a terrible budget.” Joint List Knesset member Aida Touma-Suleiman declared that Ra’am is voting for “support for the settlements, the occupation and the military. For the first time, a party that represents the Arab public has endorsed the worst evils of the occupation.”

On the other side of the map, the Likud led by Benjamin Netanyahu continued its campaign to delegitimize Ra’am and its support for the government. Recently, associates of Netanyahu portrayed Ra’am members as supporters of Hamas in Gaza, based on an investigation by Channel 13 news. Likud activists accused Ra’am of having improper ties with the Assistance 48 Association, which supports Gaza orphans and widows. They claimed that the association receives public financial support and that some of the money had been transferred to Hamas.

The report gave Netanyahu ammunition against Ra’am and the government. On Oct. 30 he called on people to watch the Channel 13 report, arguing that it “indicates a direct connection between Ra’am, the senior partner of the Bennett government, and Hamas. This nightmare government needs to be toppled and fast.”

In an interview with N12 News, Abbas responded that he has information about the Likud and Netanyahu that he prefers not to publicize right now. He was referring to coalition talks conducted between himself and Likud representatives in April 2019, where several offers were made for him to support a Netanyahu cabinet. In the interview, Abbas suggested that the Likud “admit that things happened and you were wrong."

In conversation with Al-Monitor, Jameel Abu Hussin, gave his perspective: “The budget is not meant to serve the interests of most Arab and Jewish citizens but to serve the interests of the wealthy. This budget entails raising taxes, rising prices, investment in the military and the settlements and allocates hardly 1-2% to the Arab public, although they pay about 40 billion shekels [$12.8 billion] in taxes every year, not to mention the huge sums allocated to Judaize the Negev and expel Arab residents from their villages. We cannot support a budget that perpetuates the occupation and puts obstacles in the path of peace.”

But Amjad said, “Abbas joining the coalition was an excellent and welcome step, and in my view many in the Arab community have waited for this moment. The claim that Abbas received only crumbs isn’t right; rather the opposite is true. Issues that concern the Arab community are now on the government’s table, foremost among them the issue of personal security. This impacts the Joint List, which fears for its status on the political map if Mansour Abbas’ direction succeeds, which explains why they pushed with all their might to topple the government by opposing the budget.”