Muslim Ra’am under Mansour Abbas made history June 13, becoming the first Arab party ever to be part of the coalition and government. 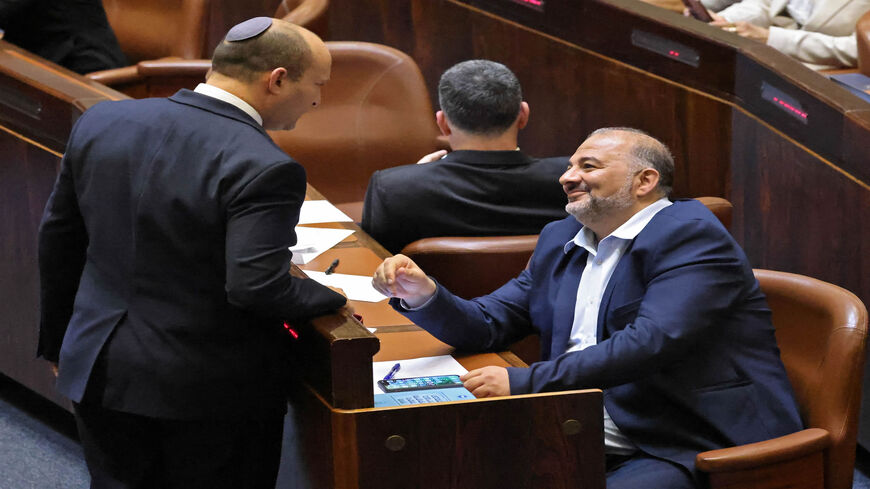 Head of Israel's right-wing Yamina party Naftali Bennett (L) chats with Mansour Abbas, head of the conservative Islamic Raam party, during a special session to vote on a new government at the Knesset, Jerusalem, June 13, 2021. - Emmanuel Dunand/AFP via Getty Images

By one vote, with a majority of 60 to 59, Israel's new government was approved and Yamina leader Naftali Bennett sworn in as the 13th prime minister of Israel. The rotation government headed by Yamina and Yesh Atid that has been negotiated for the past month was finally authorized and put an end to former Prime Minister Benjamin Netanyahu’s 12 years in power. From today, we can say “Prime Minister Bennett” and “leader of the opposition Netanyahu.” And if that’s not enough, a mere hour after the new government was sworn in, US President Joe Biden called Bennett to congratulate him on entering office. Everyone remembers that Netanyahu had to wait nearly a month before he received a call from the American president after his inauguration in January.

But with due respect to the change in government in Israel, real history was made last night at the Knesset chamber with the entrance of an Arab party — Ra’am — into the coalition for the first time, and its participation in shaping the face of the government in Israel. After a long journey of delegitimization of the Arab voice and exclusion of the Arab public, Knesset member Mansour Abbas, with his colleagues of the Ra’am list, changed the rules of the game.

We could say much of it was due to Netanyahu’s investment in legitimizing Abbas, in the hope that he could form a government with him, a move that came back to haunt him and only helped his rivals in the "change camp" to form a government. The coalition agreement signed with Ra’am took on historic significance, for the Arab community in particular and for Israeli society as a whole, since it is a precedential move for an Arab party to participate in the political game in Israel officially and fully, not indirectly or under the table.

Anyone who thought the swearing-in of the new government would pass without drama was wrong. According to various reports in recent days, Knesset member Said al-Harumi, the Ra'am representative of the Negev region, had threatened not to support the creation of the government because of the issue of home demolitions in the Bedouin community in the Negev Desert. Reportedly, he believed this issue was not adequately addressed in the coalition negotiations. In the end, he abstained from the vote and did not support the government with his colleagues in the party. Among the Arab Joint List party, all six representatives opposed the new government.  However, the Taal Party, which is part of the Joint List, and its leader Ayman Odeh waited to see that the government had a majority before they entered the Knesset chamber and voted against it.

Knesset member Ahmed Tibi of the Joint List explained his opposition in conversation with Al-Monitor, saying, “It was important for us to remove Netanyahu. In the meantime, the alternative is not liberal but a government headed by Bennett with the promise to strengthen [West Bank] settlements. We will continue to serve our public with every vote and in every committee.”

Still, the fact that Odeh waited with his vote — to be sure he would not topple the new government, in contrast to Joint List members Touma Suleiman and Ofer Cassif who hurried to vote against it —only highlighted the differences in opinion within the party. More evidence for this inner-party disagreement could be seen in an essay published by Mohammed Nafa, former secretary-general of the Community Party, also part of the Joint List, in which he called on its members in the Knesset not to be an obstacle in the removal of Netanyahu from power.

Abbas quickly tried to calm the situation regarding his colleague’s abstention and declared, “All is well, Harumi is with us. We made the decision together. If we need him to vote for [the government], we would vote for it and finish the job. [Our] four members of Knesset are part of the coalition.”

Abbas called the participation of Ra’am in the coalition a “courageous move” that won his party the leadership of two Knesset committees — the interior committee and the committee on Arab community affairs. The party also received the role of deputy chairman of the Knesset and deputy minister at the prime minister’s office, together with quite a few economic plans and budgets for the Arab community. No doubt Abbas succeeded in the mission he was on to influence the political game in Israel in order to improve the situation of the Arab community. However, not all of the Arab public supports his move, which only proves that the Arab community is not all of one piece.

Waseem Hosary, a social activity from Umm al-Fahm explained his opposition in conversation with Al-Monitor. He said, “The attempt to separate domestic issues from the national issues of Palestinians in Israel will fail the reality test. The policy of generations of Israeli governments have proven that the two issues are entwined. Discrimination against Arab citizens stems from the national conflict and any solution that ignores the sources of the conflict is bound to fail.”

Kafr Qassem resident Mahmoud Freg, who works in high-tech, told Al-Monitor that he supports the move. “Ra’am played a central role in the formation of the change government. Its participation in the coalition based on a civic coalition agreement will serve the Arab public. Prime Minister Bennett said in his speech at the swearing-in that he would take care of the Arab public, and indeed the party that represents them is Ra’am from within the government. Hence the agreement between the prime minister and Ra’am Chairman Mansour Abbas will receive long-term support from the government.”

Osama Elwahwah, an educator from the mixed town of Lod, who voted for the Joint List, voiced a surprising opinion. In conversation with Al-Monitor he expressed support for Abbas, saying, “While I voted for the Joint List in the last election, I believe in the new idea Ra’am represents, of being part of the government and starting real change and having direct influence."

He added, "Regarding the new government that was sworn in, I don’t belong to the “anyone but Netanyahu” party. Netanyahu is not the problem, but rather his policies. I’m hopeful that the new government will do right by the Arab community. The great credit for the change goes to Knesset member Mansour Abbas.”

How many of such votes would move from the Joint List to Ra’am among the Arab public remains to be seen.